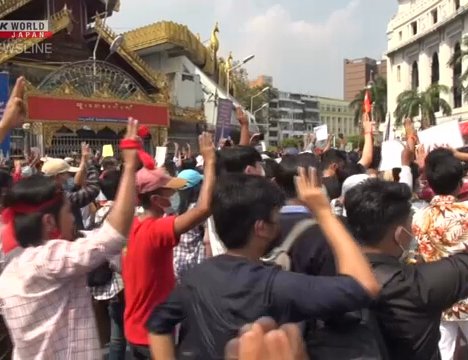 Protests in Myanmar have grown despite the military's tighter control of information following the coup one week ago.

Tens of thousands of people took to the streets in the country's largest city of Yangon on Sunday.

The crowds sported red shirts, the color symbolizing the National League for Democracy, a party led by Aung San Suu Kyi. They demanded the release of her and others detained in the power grab.

Police under the command of the military took some activists and demonstrators into custody.

Protesters in Myawaddy, a town bordering Thailand, say police fired warning shots into the air on Sunday when demonstrators approached them.

The military launched the coup last Monday. It then declared a state of emergency and took over power under the command of Senior General Min Aung Hlaing.

In 1988, many people were killed when the military cracked down on pro-democracy protesters.

Attention is focused on how the military will react this time as protests will likely grow further.

Russian Forces Claims Mariupol Steel Plant is Under Their Control By Agencies 2 days, 15 hours ago