One Million Of Covishield Vaccine To Arrive Today From India

One Million Of Covishield Vaccine To Arrive Today From India 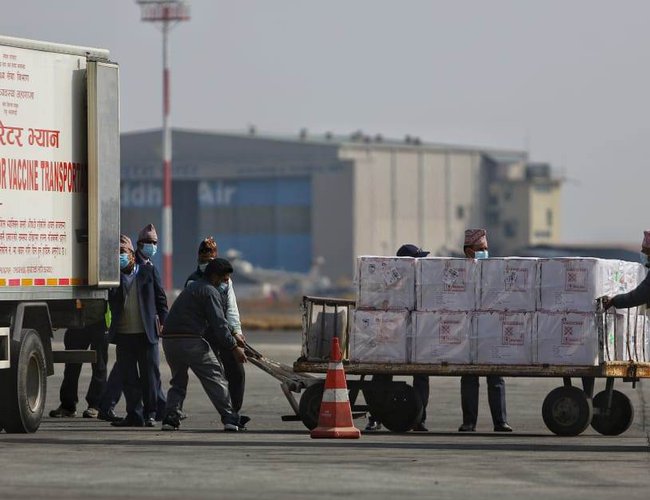 Nepal has signed agreement with Serum Institute to purchase 2 million dozes of vaccine. According to Ministry the vaccine will be stored in cold storage in Teku.

According to RSS, the government is making its final preparation for importing the anti-coronavirus vaccine, Covishield, through COVAX facility within mid-March.

The Ministry of Health and Population is all set to bring in the vaccine through COVAX facility in a way that it would be adequate to innoculate 20 per cent of the total population.

In-charge of Child Health and Vaccination Section under the Department of Health Services, Dr Jhalak Sharma Gautam shared that the 'Covishield' vaccine would arrive by the end of March as all the processes required to that end have been completed.

The vaccine manufacturing company, COVAX, will send the vaccines to be administered to 20 per cent of the population in different times, he added.

The World Health Organization (WHO) and Global Vaccine Alliance (GOVI) are providing the vaccine to the less income countries free of cost.

COVAX is sending the 'Covishield vaccine as it is approved by the WHO for administration.

The government few days back proceeded towards the procurement of two million doses of Covishield vaccine and the vaccine will come in the next few days and it will be administered to people above 55 years of age from coming March 7.

Similarly, the Government of China has announced to provide 500 doses of anti-COVID vaccine to the government. The vaccine named' Vero Cell' has been already listed by the Department of Drug Administration (DDA).

The vaccination drive to continue until Monday

Likewise, the ongoing first-phase vaccination campaign against the COVID-19 will until coming Monday and people in the second priority list will be entitled for the vaccine. The campaign which was earlier said to be over Friday got extended by two days, Dr Gautam said.