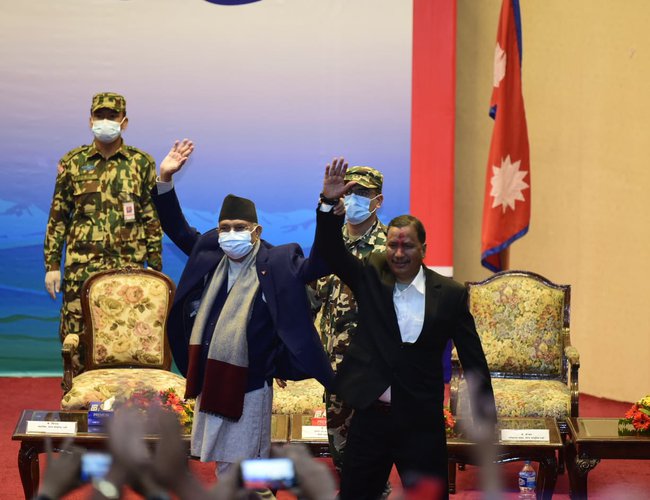 The government has entered into a 3-point agreement with Netra Bikram Chand (Biplav)-led Nepal Communist Party.

Amid a special ceremony organised at the National Assembly of the Federal Parliament on Friday, the coordinator of the talk-team formed by the government Ram Bahadur Thapa ‘Badal’ and spokesperson and coordinator of the Biplav group’s talk team Khadga Bahadur Bishwakarma signed the agreement.

In the agreement, the Biplav-led group has agreed to resolve all the political issues peacefully by holding talks with the government.

Likewise, the government has also agreed to withdraw the ban imposed on the Biplav group and release all the cadres who are facing legal actions.

General Secretary of Nepal Communist Party (Biplav Group) Netra Bikram Chand ‘Biplav’ said that the three-point agreement was signed with the government to fulfill the desire of establishing a prosperous nation.

Addressing the signature programme organised at the National Assembly on Friday, leader Chand said, “Today (21st Falgun) was an important day in the history of political movement in Nepal. We didn’t conclude the agreement for ourselves or for the party and party leaders. Our huge desire to make the nation prosperous is associated with this agreement.”

Reminiscing five leaders who sacrificed their lives in Sukhani Jungle of Jhapa, leader Chand said, “Many dreams have been fulfilled till today but the dream and desire of the martyrs and Nepali citizens is still unfulfilled.”

Assuring that he would not let the dreams of brave martyrs die, General Secretary Chand said, “It feels like the government and our party has fulfilled a kind of responsibility. We are determined to obey the 3-point agreement.”