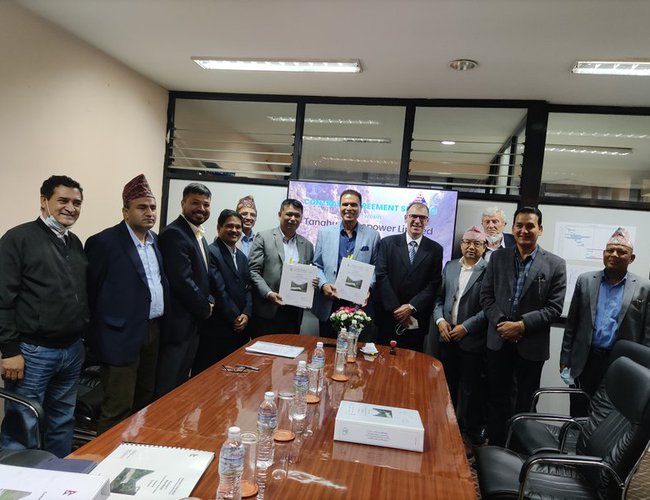 For Pradeep Kumar Thike, managing director of Tanahu Hydropower Limited, singing the contract agreement with the contractor for the construction of a package one of the project was a time of jubilation.

As he signed the contract agreement, his entire team heaved a sigh of relief as the work of package one had been already two years behind package 2 and package 3. “This is a very important day. We need to accelerate the pace to minimize the gap in the interface,” said Thike. 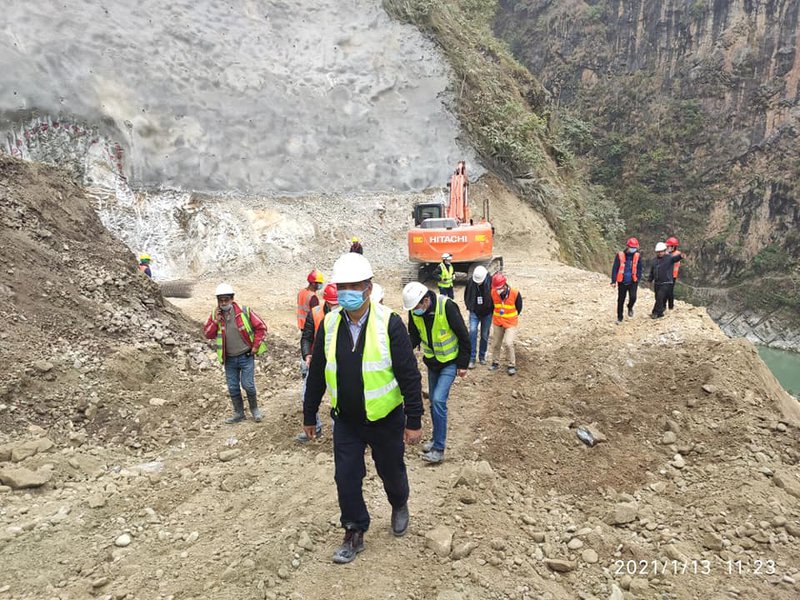 After several difficulties and constraints, on Tuesday, March 23, Tanahu Hydropower Ltd (THL) And Song Da Corporation, Vietnam-Kalika Construction (P) Ltd, Nepal (JV) signed a contract agreement for the construction of package one of the Headworks of Tanahu Hydropower Project.

Even as the contract agreement was signed, it will be another few months for the mobilization of the contractor. “We are expecting to mobilize the contractor at not far than the beginning of June,” said MD Thike.

MD Thike and representative of the JV Bikram Pandey inked the agreement. The amount of the contract agreement is Rs.16. 62 billion excluding VAT. “Today is a very important day for our project. Now, the construction of the project will move in full swing,” said MD Thike.

For the past two and half years, MD Thike, who preferred to work quietly but effectively, had faced very tough times terminating the agreement, announcing retendering, evaluation of the technical and financial proposals, submitting to Asian Development Bank for approval and so on. COVID-19 Pandemic made the matter worse pushing the selection process at least over a year. MD Thike also went to court in Italy to reimburse confiscated over Rs.2 billion bank guarantee amounts.

“Once the team from Vietnam arrives, the project will intensively discuss how to accelerate the pace of the construction work,” said MD Thike. As Song Da Corporation, Vietnam-Kalika Construction (P) Ltd, Nepal (JV) are very reputed contractors in their countries respectively, they have the capability to accelerate the work.

Although package one has been delayed due to termination of the contract with Cooperativa Muratori e Cementisti di Ravenna (CMC), the Italian contractor appointed to execute one of the components of the power plant, Syno-hydro, contractor of package two, has been making good progress completing some of the major works.

With a rare media appearance, the contractor of the 220 kV Damauli-Bharatpur double circuit transmission line has been making good progress. As a managing director of the project, Thike has been quietly facilitating all the working processes to finalize the project work.

As the contractor of phase one is two years behind phase two, the challenge is to interface two contractors. Having a long experience of working in hydropower projects including Upper Tamakoshi, Nepal’s largest hydropower project, MD Thike knows ins and outs of construction management. Given his own experience, MD Thike can overcome the difficulties faced by the project.

Although the entire process has been delayed for a long time, MD Thike said that the construction work will complete within 57 months of the execution of the agreement

ADB is helping Nepal develop a 140-megawatt hydropower plant to be located on the Seti River in the Tanahu district. The project will build a medium-sized plant with water storage facilities and a transmission system. It will also provide rural electrification and community development in the area, and a reform and restructuring plan for the national utility, the Nepal Electricity Authority.

Tanahu Hydropower Limited — the developer of the Tanahu Hydropower Project —terminated the contract signed with Cooperativa Muratori e Cementisti di Ravenna (CMC), the Italian contractor appointed to execute one of the components of the power plant, on 1 October 2018.

THL published the first tender notice on 25 April 2019. Following the evaluation, all the tenders were canceled and retender was republished on 28 February 2020.

After the upsurge of COVID-19 Pandemic's subsequent announcement of lockdowns and restriction on international flights, the date for tender extended several times.

The construction work under package two has been currently undergoing. This package includes tunnels, construction of powerhouse and supply of hydro-mechanical and electromechanical equipment.

The contractor company Syno Hydro has already completed the construction of the Cable Tunnel and currently, it is working on an under-ground powerhouse, a tunnel for search tank access and an access tunnel to the dam site.

The recent development means a delay in the construction of the 140MW storage type project, which has been divided into two components with a contractor for each package.

Situated 150 km west of Kathmandu on Seti River near Damauli of Tanahu District, the project is a storage type plant capable of supplying peak power for a minimum of 6 hours daily. The power will be evacuated through a 40 km long 220 kV double circuit transmission line to the New Bharatpur sub-station.

According to the project, the estimated Annual energy will be 585.7 GWh, with Primary energy at 266.2 GWh and secondary energy at 319.5 GWh. The project will be equipped with a sediment flushing system. The height of the dam is 450 meters.

The project will also include Rural Electrification (RE) and Transmission Lines (TL) component. A new 220 kV double circuits TL will evacuate the generated power to the new Bharatpur substation. The length of the transmission line corridor is 35 km. In addition, the project will electrify almost all unelectrified villages through the Rural Electrification (RE) Program.

As all the contract agreements have now been completed, MD Thike, an experienced manager, will have another difficult task before him: to accelerate the work by mobilizing the contractors.

BEEN Energy Efficient Building By A Correspondent 6 days, 3 hours ago