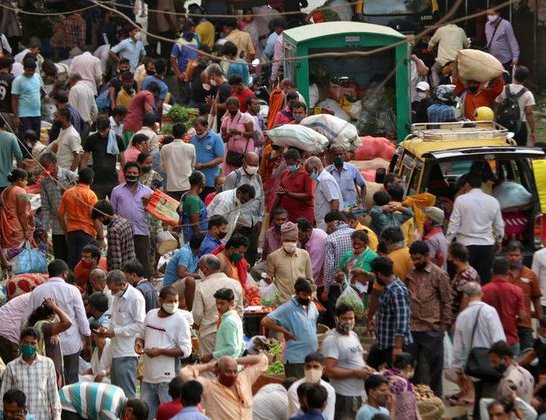 India recorded its deadliest day of the coronavirus pandemic yet with 3,689 deaths in the last 24 hours and one more state going into lockdown as the nation’s creaky healthcare system is unable to cope with the massive caseload.

Sunday was the fourth straight day India recorded more than 3,000 deaths as the second wave of the pandemic carries on unabated and keeps setting grim new records. Altogether 215,542 people have died from COVID-19 in the country.

Healthcare systems are overwhelmed and a shortage of medical oxygen has emerged as the most serious challenge.

Thirty-four patients died because of oxygen shortages in hospitals in the capital New Delhi and the states of Andhra Pradesh and Haryana on Saturday, the Times of India reported.

Thirty-one more with COVID-19-like symptoms and “breathing difficulties” died in a hospital in Uttar Pradesh state, the report cited authorities as saying.

Nearly 10 Indian states and union territories have imposed some form of restrictions, even as the federal government remains reluctant to impose a national lockdown.

The eastern state of Odisha became the latest to announce a two-week lockdown, joining Delhi, Maharashtra, Karnataka and West Bengal. Other states, including Uttar Pradesh, Telangana, Assam, Andhra Pradesh and Rajasthan have either imposed night curfews or weekend lockdowns.

Meanwhile, a court in New Delhi said it would start punishing government officials for failing to deliver life-saving items.

The government has been using the railroad, the air force, and the navy to rush oxygen tankers to worst-hit areas where overwhelmed hospitals are unable to cope with an unprecedented surge in patients gasping for air.

But with the government unable to maintain a steady supply of oxygen, several hospital authorities sought a court intervention in the Indian capital where a lockdown has been extended by a week to contain the wave of infections.

“Water has gone above the head. Enough is enough,” said New Delhi High Court, adding it would start punishing government officials if supplies of oxygen allocated to hospitals were not delivered.

“We can’t have people dying,’’ said Justices Vipin Sanghi and Rekha Patil. The court said it would start contempt proceedings.

‘People dying in front of hospitals’

The latest figures came as medical equipment, including oxygen-generation plants, was flown into New Delhi from France and Germany as part of a huge international effort.

“We are here because we are bringing help that … will save lives,” Germany’s Ambassador to India Walter J Lindner said as 120 ventilators arrived late on Saturday.

“Out there, the hospitals are full. People are sometimes dying in front of the hospitals. They have no more oxygen. Sometimes [they are dying] in their cars.”

“The epidemic is still going on in one country. The world won’t be safe until we are all safe. So it’s a matter of urgency,” he said early Sunday following the delivery of eight oxygen-generation plants and dozens of ventilators from France.

There are growing fears about the surge of infections in rural regions where health infrastructure is already patchy and limited. Hospitals in Delhi have continued to issue SOS calls for oxygen on social media, with the latest appeal posted by a children’s hospital on Twitter on Sunday.

Prime Minister Narendra Modi held a meeting on Sunday to review the measures being taken to tackle the unprecedented surge.

India opened a new round of its vaccination drive on Saturday, extending coverage for all those above 18 years of age, but only a handful of states were able to deliver the jabs because of a shortage of vaccines. Only 86,000 newly eligible people took the shot, the government said.

International aid is also arriving from the United States and other countries that have promised support to India as its healthcare system is pushed to the brink of collapse.

Vote counting in Assam, West Bengal, Tamil Nadu, Kerala and Puducherry is scheduled to end on Sunday with results to be announced once the tallies are done.

The results are seen as a test of the impact the pandemic’s devastating second wave is having on support for Modi and his right-wing BJP party.

While Modi’s ruling BJP is seeking to consolidate its hold over more states, the main opposition Congress party and regional parties hope to regain political turf.

Poornima Joshi, a political commentator, told Al Jazeera the central government was “wholly unprepared” for the current COVID-19 wave as evidenced by a February 21 meeting of the BJP’s national executive.

“They passed a political resolution claiming that Prime Minister Narendra Modi had defeated corona and there were all these fantastical claims about how Indian immunity is so strong and we are not like the West, who are vulnerable to pandemics and so on,” Joshi told Al Jazeera.

Most of the votes were cast in March but polling in some constituencies continued through April, just as India started detecting thousands of coronavirus infections every day.

Ahead of the surge in COVID-19 cases, leaders of all political parties, including Modi, led political rallies where large crowds flouted rules on social distancing and mask-wearing.

Modi has been criticised for focusing on the state elections instead of the pandemic. Some experts blame the rallies and mass religious gatherings attended by millions for the severity of the second wave.

The federal government has also been accused of failing to respond to a warning in early March from its own scientific advisers that a new and more contagious variant was taking hold in the country.