COVID-19 Crisis management Center (CCMC) was formed on 10thJune 2020 with the objective to put into action required political and administrative measures at the federal, provincial and local level- to contain the spread of the virus. 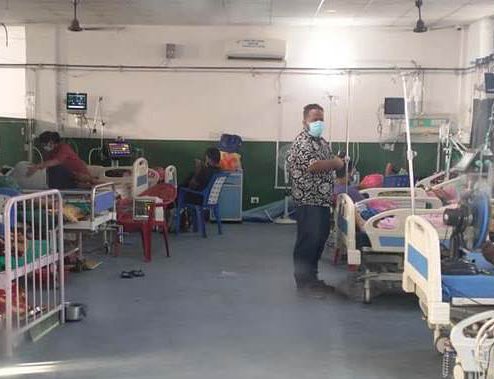 In honor of frontline workers fighting the ongoing public health catastrophe across the world and particularly in Nepal, it is imperative to understand why a second wave swept across the country leaving more than seven thousand deceased in 14 months. Amongst multiple factors responsible for this, one stands out as deeply rooted in the Nepali way of management. An optimistic bias surround most of the “planning” that is drawn up to overcome a problem, however in execution of those plans, there’s always difficulty and pessimism over resources needed to implement those plans. This may be referred to as “planning fallacy” by behavior scientists. In simple words plans adopted in paper don’t get implemented, and this is one of the major causes of the current public health catastrophe in Nepal and may continue to be a management concern in our future.

COVID-19 Crisis management Center (CCMC) was formed on 10thJune 2020 with the objective to put into action required political and administrative measures at the federal, provincial and local level- to contain the spread of the virus. CCMC was the most powerful and resourceful constitutional body, headed by a Deputy Prime Minister and seven Ministers. It was formulated to lead the fight against and prevent a COVID-19 disaster.

However, Nepal was unprepared as the second wave of the virus with four new variants swept in towards mid-April 2021. Affected people now lack basic oxygen supply, Intensive Care Unit beds and ventilators are unavailable, and the vaccination drive has come upon logjam leaving millions without any prevention against the pandemic.

Furthermore, there are two strategic bodies under the Ministry of Home Affairs; Disaster and Conflict Management Center (DCMC) and National Disaster Risk Reduction and management Authority (NDRRMA). The Ministry of Population and Health holds the Health Emergency and Disaster Management Unit (HEDMU) which has been dealing with diseases and currently with the pandemic as well. Diplomatic exercises and government appeal to assistance too has been an ongoing effort.

Come to think of it, none of what is happening in Nepal now could’ve gone unforeseen by this strategic team of professionals. Further risks must have been assessed too. However, plans yet again seem to have been restricted to paper. There’s little more than only blame to spare the responsible. With an Ordinance, on 20 May 2021, the CCMC was modified into a working committee and brought under a political steering center lead by the Prime Minister. The CCMC is now headed by a CEO.

Worse still, 74 out of 77 districts have imposed lockdown and prohibitory orders expressing serious health concern, the general public in now facing imprisonment of up to six months and a fine of up to three lakh Nepali rupees if caught violating lockdown orders. Day to day life in Nepal is pushed into darkness.

Therefore, a question to understand this matter ought to be taken up, “Why is it that strategies curve into a planning fallacy in Nepal”? “What can Nepal do to make plans work?

It also reminds me of at least five articles written a year ago on the management of COVID-19 and impacts foreseeing second and third wave unfolding due to millions working abroad, poor public health arrangements, weak governance system and contested political behavior, stressed on the five principles that was indispensable. Firstly, by building trust and unity within the country and the global front, building a narrative of optimism, opposing forces that divide, providing all and sundry a role by fostering the grass-root and lastly adopting “Exit Strategy” with disengagement and engagement course of action justly defying new discrimination, corruption and dissuade exploiters and free riders.

Realpolitik and Distraction amid a pandemic

Nepal-India 1,200 kilometers border have been regularized with thirteen points of entry remaining open of the thirty-five though border crossing is informal. Domestic and international flights have been suspended except for two flights from Delhi. Prime Minister Oli has time and again directed the ministries and bodies concerned to put full effort and even remove all legal obstacles to save lives of citizens.

The efforts of the political party leaders and political party in power are struggling to give direction with wrong priority when the people are suffering with indecisiveness and reactive measures rather than initiative to solving the health challenges. All the constitutional provisions have been exercised as well as the Judiciary encounters have been performed in grappling for power. There are four contemplations; political instability steeringto in correctpriorities, secondly, the tools and instruments dependency on political directions in crisis and third, politicization of institution and lastly corruption.

First, ABSENCE OF STRATEGIC COORDINATION AMONGST STAKEHOLDERS: Synergy between stakeholders vertical and horizontal including political, administrative, private, as well as non-governmental bodies seem to be in scatter, all moving in their own direction, but with the invariable aim. If particular targets were set for individual stakeholders under a farther-reaching coordination body results could’ve varied, for the better. A call for non-governmental resources to focus on regenerating oxygen plants, life-threatening care medicines private sector efforts to tackle hospital requirements, vaccines, testing supplies and government to methodize ‘herd immunization’ that means getting 80 percent of the population vaccinated to avoid ‘hot spots’, focused skilled human resources and so on. However, strategic level coordination seemed absent setting a confusion of priorities amongst stakeholders. Even federal line ministries, provincial and local governments seemed to lack coordination. Flow on data and information on demand and methods of supply seemed inefficient and ineffective. Synchronisation on structural requirements seemed loose as well, besides Lumbini, which recently initiated the provincial ministry of health, all the other six provinces do not have health ministry even while health was perceived the greatest national challenge.

The second reason why plans encounter troubled implementation is MONETARY FASCINATION: World around and specially in the developing world, value of money supersedes the value of work. This understanding or behaviour leads individuals and groups to believe that ‘where there is money there is work and willingness’ while ‘where there is ineffective work there must have been little money and willingness’. This fascination with money leads has led to several obstruction or managing problems.

The third reason could be reinforced BELIEF IN CONVENTIONAL SYSTEMS. Rather than mechanizing innovative systems that suite varying problems, we tend to keep going back to what is already in practice. Definitions of working models in Nepal, are all borrowed, this has restricted Nepalis from defining their own methods of solving problems. With drop back customized methods, willingness to develop borrowed methods seem to be lagging and facing what we can call ‘pessimism bias’s too. Even the Public-Private Partnership (PPP) system which could’ve worked well is addressing the ongoing health catastrophe seems to lack trust, infrastructure, and required resources. Nepal ranks 111 in health security index.

Finally, INOPERATIVE REGIONAL RESOURCES lead to obstruction in implementations of plans in Nepal. Efforts to joint intervention at the regional scale seems to be a fading priority whereas Nepal could’ve benefitted from and helped neighbouring countries through higher engagement. Activating South Asian Association for Regional Cooperation (SAARC) Disaster Management Centre (SDMC) was floated on March 2020 via video conference initiated by PM Modi with a call for an emergency fund in response to the global COVID-19 pandemic. A total of US$ 21.8 million still lies on the coffer where Nepal also contributed US$ 1 million. This was an encouraging indication of cooperation and coordination which turned out again to be just of spirit. The proposal which came to many as a surprise seems to have remained a surprise.

Politics is just at the corner when the pandemic is raging and looking at togetherness. The second wave of political conduct shadowed the second wave of COVID-19 with the dissolution of the House of Representative by the Oli led United Marxist Leninist left government being challenged at the Supreme Court.

Preparation for the possible third wave that will affect youths under the age of 18, which is 40 percent of the population as per the UNICEF report 2017 or another upsurge with status-quo management system. To inoculate at least 51.6 percent of the population from the age of 15 to 54 that counts to 22.7 million dozes was the vaccination plan. The second inoculation drive has not concluded with just more than 3.1 million dozes available.

Precarious scarcities in vaccines, oxygen, testing supplies, skilled human resources and life-threatening care medicines and provisions are obligatory for immediate lifesaving so national resources must be expanded by conducting one, short precise health training programs pursuing the possible unemployed for multiplying health assistance. Two, local political unit could have community health services, isolation centers with PPP on temporary and permanent foundation. Third, international aid and spread-out NGOs and INGOs could consider on health security to prevent and mitigate adverse health impacts. This will be a huge step in assisting security of health.

Identifying whereabout the people are through community (local political entity) health services with local administration’s coordination and cooperation will assist the campaign. National success in the fight against COVID-19 is simply winning at the lowest level with community vaccination campaign and establishment of health centers with temporary and permanent foundation.

The UN and other major powers and bilateral assistance to manage surge in COVID-19 is on rise with persistent diplomatic efforts to self-assure vaccines to bolster the irresolute immunization campaign as supplies run out. The UN and Partners summoned for international harmony calling for US4 83.7 million to assemble emergency response over the next three months to assist 750, 000 vulnerable people. Australia, China, India, Spain, Switzerland, UK, US and the Non-Residential Nepalese Associations have been in the fore-front in putting efforts to counter the outpouring. But more demanding is the government’s prioritization to undertake the challenge with the new structures now out. Mobilizing DCMC, NDRDMA and HEDMU may well be suitable for effectual management attempts.

Nepal is the most expensive country in South Asia with the rise in inflation and the just announced parliamentary election. The politically affiliated, criminal activities, smugglers and intent of corruption is taking advantage of the unstable socio-economy, socio-political and security situation. Precedence ought to be given to security of supply and security of food and basic essential.

Let the investments and extraction plan in governance of public health, that is at the top of the list for decision makers not gradually receive less attention in the future due to human behavior fading to newer priorities with focus on the third wave of political events in the coming weeks and months as the main three contests are unreliability of the eradication of virus, immunity and reoccurrence.