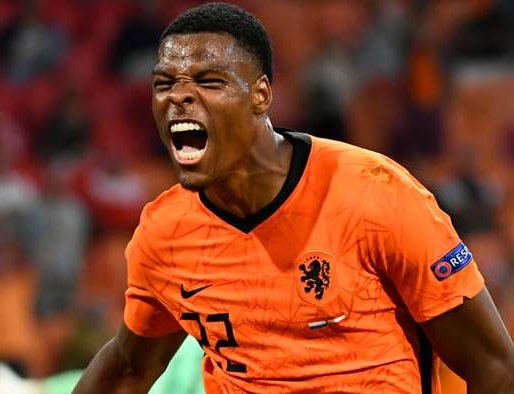 Netherlands wing-back Denzel Dumfries has said Euro 2020 is "starting to look like" a childhood dream come true after scoring goals in each of his country's two wins to begin the tournament.

Dumfries won a first-half penalty before sliding in an unselfish Donyell Malen centring pass to seal a 2-0 victory over Austria on Thursday.

The Dutch are now through to the knockout stage despite manager Frank de Boer admitting they haven't reached their best form.

"It's starting to look like [a childhood dream]," Demfries told NOS . "You know what we're going for, we grow in it and it feels good."

He added on the build-up to his goal: "Donyell was very sharp, it was a good ball from Memphis [to start the move] and I only had to tap in."

De Boer found some faults in the winning performance, particularly when his side held the ball, but he has little issue with there still being room for improvement at this point in the competition.

"We can do better in possession, but we shouldn't peak too early either," he told NOS .

Later, De Boer added to reporters: “It was the opposite of the game against Ukraine. We were dominant against Ukraine, but we missed something on the defensive.

"Today it was the opposite. We lost the ball too quickly after winning the ball in the first half. Usually the Netherlands are good in possession. It wasn't our best game in possession.

"We were much better defensively than against Ukraine. I'm very happy how we improved on the defensive."

How have Austria responded?

"We gave the ball away too easily in the first half," said head coach Franco Foda. "We invited the Netherlands to hit us on the break too often."

Austria won their opener vs North Macedonia and will face Ukraine in the final group stage match.