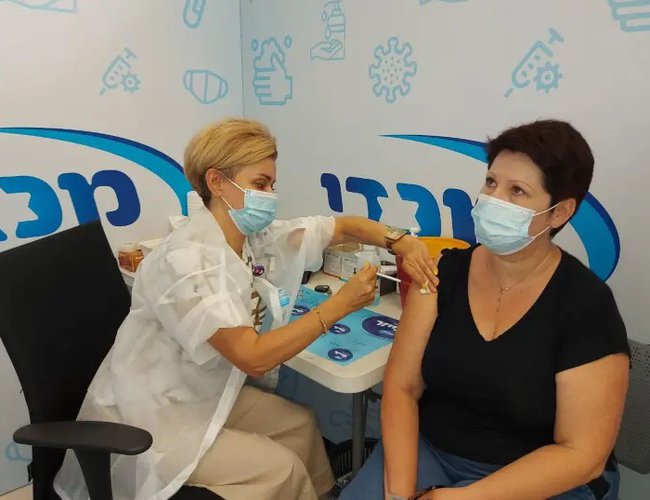 Health Minister Nitzan Horowitz says beating coronavirus is “in the hands and ‘shoulders’ of every person.”

Israelis as young as 50 can get a third shot of the coronavirus vaccine beginning immediately, the Prime Minister’s Office announced late Thursday.

The decision was made following a lengthy meeting by the Advisory Committee for the Corona Vaccines and Epidemic Control.

“Members of the team worked diligently, professionally and thoroughly, and reached the conclusion that the third inoculation for people aged 50 and over, and for medical teams, is effective and correct,” Prime Minister Naftali Bennett said. “The campaign to vaccinate people aged 60 and over has been a great success. Over 750,000 people have been vaccinated up until now and we are continuing on to the next stage. This is an important step in the fight against the Delta pandemic.

Specifically, 774,000 Israelis over 60 have been given the booster shot.

Bennett spoke to the heads of the health funds shortly before sundown on Friday and asked them to keep the third shot campaign running over Shabbat and until late at night.

"This is a life-saving effort that aims to protect public health," the prime minister stressed, "and therefore they should be involved in the immunization effort around the clock - 24 hours a day, seven days a week."

He also instructed the health funds to aim to double the rate of immunization next week with the support of IDF medics, an agreement Bennett made with Defense Minister Benny Gantz.

Health Minister Nitzan Horowitz got his third shot at Meir Medical Center in Kfar Saba on Friday afternoon, where he stressed that the decision to approve the booster was based on “medical and scientific recommendations.”

He said that there is an indication that the ability of the body to ward off infection and serious disease from the Delta variant goes up “dramatically” after the shot.

“Very preliminary results from Israel (to be taken as such) suggest effectiveness for the third booster in 60 year olds and above in preventing infections,” Prof. Eran Segal, a computational biologist at the Weizmann Institute of Science who advises the coronavirus cabinet, tweeted Friday morning. “Current estimate is two-fold reduction compared to 60-year-old vaccinated with two doses. Estimates will likely change in the coming days.”

Last week, Clalit Health Services reported that 88% of people who received the third shot of the coronavirus vaccine said they felt “similar” or “better” compared to how they felt in the days following receiving the second vaccine. The report was based on data the fund captured from some 4,500 people over 60 out of the 240,000 of their members who received the third shot at the time.

Horowitz said that Israel is in a race against the virus and the most effective way to stop its spread is to vaccinate. He described a “triangle” or three-pronged effort for combating COVID: restrictions, such as the Green Pass program and masks; vaccination; and investing in beefing up the health system with more medical and support staff to be able to manage the growing number of serious patients.

He said that a High Holy Day lockdown is a “last resort” and that it is “not a successful solution” to the pandemic.

“It is in the hands and ‘shoulders’ of every person,” Horowitz said.

Even before the formal announcement by the prime minister was released, health funds informed their members that anyone who qualified could contact them and make an appointment.

Maccabi Health Services said that by Friday afternoon some 25,000 members had already scheduled appointments and it planned to inoculate as many as 11,000 people over the weekend.

Clalit, Meuhedet, and Leumit all put out similar messages, indicating that well over 50,000 people in this age cohort had already registered to get vaccinated.

The decision to inoculate healthcare workers and people over the age of 50 is first-in-the-world.

The American Food and Drug Administration on Thursday evening US time authorized a third jab for immunocompromised people. Israel began giving a third shot to the immunosuppressed last month.

“I call on everyone over 50 to get in line tomorrow morning,” Bennett said. “Go get vaccinated. This is a great success. It is in our hands.

“Together with the Health Ministry, we have brought a great quantity of vaccines to Israel in order to facilitate quick action in vaccinating the public and protecting it from the Delta strain,” he concluded.

There were 6,083 people diagnosed with coronavirus on Thursday, the Health Ministry reported Friday morning. The number of serious cases stood at 462. Some 5.02% of the people screened had a positive result.