US Credibility Not Damaged Over Afghanistan: Biden

US Credibility Not Damaged Over Afghanistan: Biden 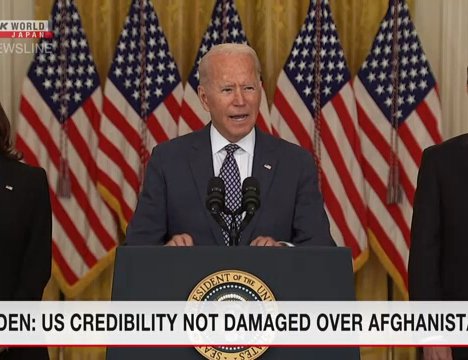 President Joe Biden has dismissed criticism that the chaotic situation in Afghanistan is undermining US credibility on the world stage.

His comments follow weeks of turmoil across the country, where departing US troops left behind government forces that were swiftly overrun by Taliban fighters. Thousands of expatriates and others seeking to escape the Taliban are still struggling to get to the international airport in Kabul to evacuate.

US media say the sudden end to America's 20-year presence in Afghanistan has created the impression that its soldiers have abandoned vulnerable people.

But Biden said on Friday that he hasn't heard any of America's allies questioning its credibility.

He said he talked with leaders from the Group of Seven and NATO countries before deciding to pull US forces out of Afghanistan, and that they all supported the decision.

Asked about the evacuation of translators and other Afghan people who helped the US war effort, Biden said, "We're making the same commitment."

Zelenskyy Meets With EU Leaders By Agencies 20 hours, 10 minutes ago