The Bhagwati Jatra Of Palpa Amidst The Pandemic Of Covid- 19

The Bhagwati Jatra Of Palpa Amidst The Pandemic Of Covid- 19 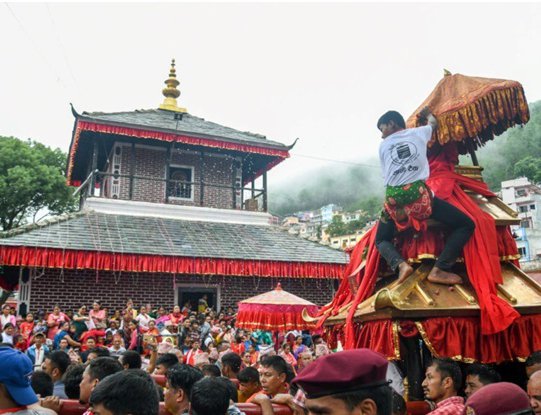 The historic Ranujireshwari Bhagwati Temple has recently become a suitable destination for religious tourists. In the year 2078, Shri 7 Ranujireshwari Bhagwati Guthi Management Committee family, Palpa cordially requested the devotees to attend the 203rd Shri Ranujireshwari Bhagwati SindurYatra this year due to the dire situation of the Covid 19 pandemic. Devotees were requested to enter the temple premises following the health standards (use of masks and maintaining social distance). It was informed that t his year's Jagram and Jatra will be performed in a very limited manner only for the daily worship of the mother and the worship that should be done according to the Tantrik method.

The cursory review of the history shows that before going to war with the British in 1972, the then stationed Colonel Ujirsingh Thapa had sworn to the eight-armed mother Bhagwati to win the battle. At that time, Ranujireshwari Bhagwati Jatra is being celebrated every year at the government level saying that Colonel Uzair Singh, who used to run a rathyatra with government honors every year, has vowed to win the war.

Colonel Ujir Singh, then stationed at Palpa, had built a Bhagwati temple in 1872 BS, claiming that his vow had been fulfilled. Every year on Bhadra Krishna Navami, this procession is celebrated with pomp and circumstance in Tansen, Palpa. Although Nepal could not win the battle of Jitgadhi between the British in 1871-72 BS, after the conquest of Nalapani, Malaun, Jaithak, etc. in the west, the British forced Nepal to sign the Sugauli Treaty in their favor.

The Sugauli Treaty bordered the Mechi River on the east, the Mahakali River on the west, and the Chure Hills on the south. Although Nepal lost most of the plains, Butwal, which was the main dispute, was given to Nepal by the British. Ujir Singh Thapa, a resident of Palpa, was very happy after the treaty was signed with Butwal Nepal.

According to the order issued by the then Shri 3 Juddha Shumsher to renovate the temple after the temple collapsed in 1992 B.S. due to the earthquake of 1990 BS, it is seen that the descendants of Ujirsingh disbursed one lakh rupees from the then King Birendra for the maintenance of the temple in 2031 BS.

It is customary to place the idol of Shri 7 Ranujireshwari Bhagwati in a chariot at Tansen's Bhagwati Tole. The procession starts from the Bhagwati Temple at Bhagwati Tole of Tansen with Bajagaja. The Nepal Army offers special sacrifices and performs special worship.

Jatras (festivals) abound in Nepal, but the KhatJatrasare somewhat different from the rest. Putting the figures of the deities on the khat (a wooden platform), and then taking them out in procession, is known as khatJatra, a tradition that has been followed in the Kathmandu Valley from the pre-Malla and Malla eras to the Shah eras. Along with the national expansion campaign, the tradition of Khat Jatra, which was prevalent only in the Kathmandu Valley, began to be celebrated in other parts of the country as well. Khat Jatra is also celebrated in different parts of Palpa. Among the Khat Jatras of Palpa, one held in Tansen (BhagwatiJatra) is different than the rest.

This journey is not only connected with religion, but also with nationalism.

The then company government can measure the bravery, patience, strategic skills, and battlefield capabilities of their Nepali enemies in the battles fought under the leadership of Colonel Uzair Singh Thapa.

Before entering the battlefield, Colonel Uzair Singh Thapa had made proper arrangements for arms and ammunition as well as started construction of roads and bridges and culverts and fortified outposts at the battle level. Moreover, various gods and goddesses were worshiped, and the most auspicious time was determined, to ensure victory in battle. And, Colonel Ujirsingh Thapa also swore by touching the feet of the 16-armed Mahishasur Mardini Bhagwati in the middle of Tansen Bazaar, provided that the victory was his, to build a large temple and to spread the fame of the goddesses all over the region by organizing the SindoorJatra.

The chariot is then paraded around the city, accompanied by music bands and dancers, as well as Nepal Army soldiers, soldiers of the Guruju platoon carrying shields and swords, police personnel, government employees, students, the general public, and various associations and organizations, the Nepal Army enters the barracks, where it is given a salute by the Nepal Army before conducting Bhagwati Puja. When entering the gates of the barracks, the soldiers themselves carry the chariot on their shoulders.

Another basic aspect of this journey is the daily rituals of a regular priest and the arrangement of worship at the temple. The priest should be someone with the knowledge of conducting the rituals related to the mother congregation of the temple of the goddess according to Hindu tradition and rituals. Two hundred years ago, Colonel Uzair Singh Thapa brought Chandramani Gubhaju of Malla Varna Vihar, Lalitpur, to Palpa, to perform Nitya-NaumaticPooja and BarshaBandhanPooja (KarakPooja), and to perform Tantric rituals and worship during KalratriAshtami and ChaiteDashain. , Many of the same Gubhaju descendants have been conducting worship in this temple to date.

This year, the BhagwatiJatra of Palpais being celebrated on Wednesday, September 1, 2078. Brief features of this journey:

A celebration of victory, triumph, and joy; A specially decorated chariot and attractive umbrella; Offerings in Chatamari chariots of various colors; There is no racial discrimination; Army presence procession; Riding in a chariot from every house; Presence of a significant number of devotees from Palpa and surrounding areas; Staging comedy and drama to remind the history of the past; Pulling and carrying a chariot from a rope, a must-see journey in life; A beautiful, powerful, glorious journey with a history of almost 200 years. KarnaPriya Baja, Bhajan, Tabla, Jhyali, etc.

Though Nepal was defeated in four places in the attack on Nepal from five points, the British army was defeated by the Nepali army in the battle of Jitgadhi.

Krishna Janmashtami is a holiday celebrated all over the Hindu world. From Sri Lanka to Nepal, devotees mark Lord Krishna's birthday by fasting and dancing at midnight. In Tansen, Krishna Janmashtami is also a major holiday festivity where local temples line Hindus to see Krishna’s prayers and offerings for the place. But the real holiday on everyone's lips is Bhagwati Jatra.

In early September, Krishna Janmashtami is celebrated around the world. But Tansen also has his local festive holiday that overshadows all the celebrations marking Krishna's birth. After the prayers of Lord Krishna, many locals can be seen crowding the Bhagwati temple. What was a simple, humble temple during the day, turns into a colorful world lit by neon lights at night.

During this festival, it is plain to see the courtyard around the Bhagwati temple is so large. Once a year, the temple grounds are required to accommodate half the town of Tansen. While devotees wait for the clock for midnight, bands come to the Bhagwati temple to bring a holiday with drums and horns while teenagers spend time dropping bottles of Rakshi.

Throughout the night, when the clock strikes midnight, midnight marks both the birth of Lord Krishna and the beginning of the BhagwatiJatra the next day. Many Hindus, however, are just waiting to catch a glimpse of the famous monster known as Lakhe.

In Newar culture, Lakhes are a monster that stands to save the villagers from other evil creatures from the forest. According to Newar folklore, the demons wanted to live in the city among the people. The king was skeptical, wondering what to eat if the animal did not eat human flesh. The demon assured the king that he only ate meat and eggs. The name "Lakhe" is thus derived from the Newar word "la" meaning meat and "khei" meaning egg.

This festival, which illuminates Tansen every year, is much more than the worship of Goddess Bhagwati.