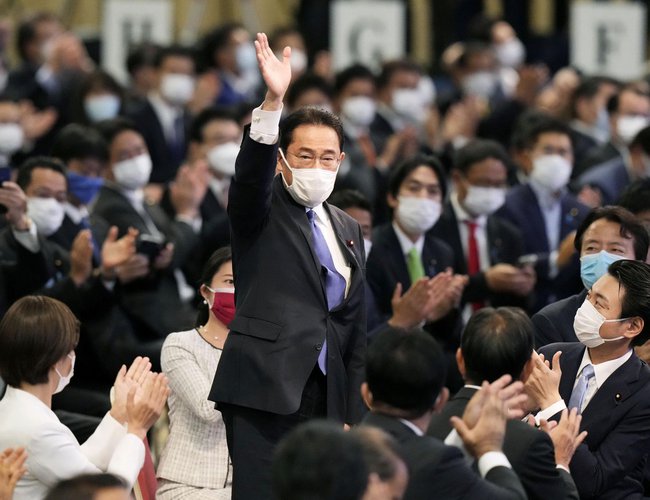 The newly elected leader of Japan's main ruling party says he is ready to unify a country shaken by the coronavirus pandemic. Former foreign minister Kishida Fumio took the helm of the Liberal Democratic Party on Wednesday. It virtually ensures he will become Prime Minister.

As a foreign Minister Kishida Fumodio also visited Nepal in 2014. During his visit to Nepal, he visited various places of Kathmandu.

Kishida says he will hammer out an economic package worth several hundred billion dollars by the end of the year. It's his effort to kick-start an economy hit hard by the crisis. He says his policies will ensure a more equitable distribution of wealth. The former foreign minister also has a plan for raising Japan's image abroad.

Kishida says, "I'm making three commitments for diplomacy and security. I am determined to protect democracy and other universal values, to protect Japan's peace and stability, to protect our interests through raising Japan's presence in the international community by contributing to solving environmental and other global challenges. I will carry out foreign and defense policies based on these commitments and achieve a free and open Indo-Pacific."

Kishida campaigned on rebuilding the country's medical system and economy, both hit hard by the coronavirus pandemic. He is vowing to set up temporary COVID-19 hospitals throughout the country so no one has to wait for treatment. He also plans to inject some 90 billion dollars into the science and technology sector.

Kishida was born into politics -- seemingly destined to follow in the footsteps of his lawmaker father and grandfather. After just five years as a banker Kishida first dipped his toes into public service. He became his father's secretary. In 1993, he took over that Hiroshima seat and has been re-elected eight times.

Eventually, he was tapped to become Japan's top diplomat. Kishida held that role for over 4 straight years, a record in post-war Japan. As foreign minister he was instrumental in bringing Barack Obama to his home city.
It marked the first time a sitting US president saw the destructive legacy of America's atomic bombing up close.
Kishida also worked to ease long-standing tensions with Seoul. In 2015, he struck a deal with his South Korean counterpart on the politically sensitive issue surrounding people referred to as wartime comfort women.

The 64-year-old is known as a soft-spoken, honest politician. Now, a man called too serious -- or even boring -- has reached a pinnacle of political achievement.

During his visit to Nepal in 2014, he visited various parts of Kathmandu valley and Minister Kishida said that Japan and Nepal have maintained traditionally friendly relations since the establishment of diplomatic relations and he wants to further strengthen cooperation on policy matters as well. Touching upon the importance of firm establishment of democracy in Nepal, Minister Kishida conveyed Minister Pandey Japan’s intention to continue to support Nepal’s efforts. Furthermore, Minister Kishida thanked Minister Pandey for visiting Hiroshima and offering flowers at the Hiroshima Peace Memorial and said that he would like to cooperate with Nepal in the field of disarmament and nonproliferation. 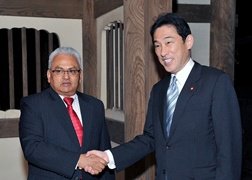 Minister Kishida expressed his strong hope for progress in the process of formulating a new constitution in Nepal. He explained that Japan once dispatched the Japan Self-Defense Forces personnel to the United Nations Mission in Nepal (UNMIN) and it intends to provide support for initiatives aimed at establishing democracy in Nepal, including assistance in the development of the legal system. Minister Kishida also proposed setting up a political dialogue between Ministries of Foreign Affairs of both countries.