Condition Of Public Transport In Nepal

Although private owners have their monopoly in the public transport, they do not abide by the universal meaning. 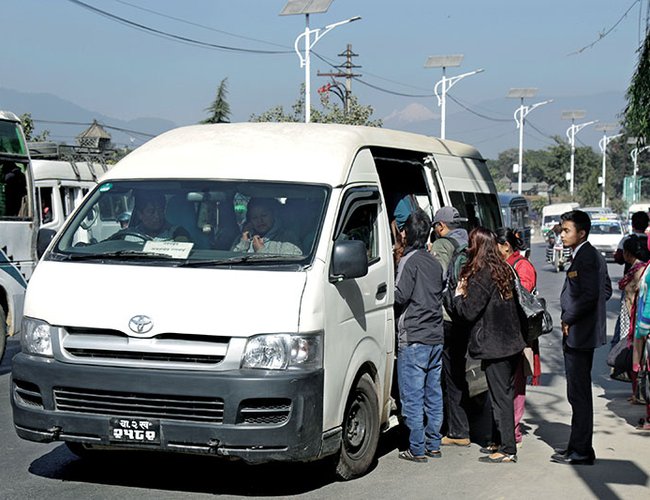 Examples of public transport include city buses, trolleybuses, trams, and passenger trains. Public transport is a vital form of transport in all parts of the world. The public transport system must have some good qualities or features such as being affordable and accessible, with proper management of seats and so on. Public transport is very crucial for all the people. It has a lot of importance and many advantages. It helps people to travel and meet different needs. A single public bus can carry tens of people and still occupies almost the same space as some large personal vehicles. Moreover the public transport tends to be cheaper than using a private car.

Apart from generating employment opportunities, from drivers to attendants, the public transport systems are also the means of livelihood for many, either directly or indirectly.

However, Nepal’s public transport does not follow the universal definition. Although Nepal’s Transport Management Act has defined the term public transport, no one follows the term. The regulations prepared under the act have often been amended to suit the interest of the persons in power. Nepal’s act is so flexible on the definition. From six-seat three wheelers to big bus up to 70 seats, all are regarded as public transport.

Although private owners have their monopoly in the public transport, they do not abide by the universal meaning. Riding a public transport in Nepal is like a curse as they often violate the capacity rule, allowing as many passengers as possible. Thus, they are overcrowded and cramped. Nepal’s main public transport systems have middle size buses with the capacity of up to 30. However, they run with people double the capacity. Due to over loading, public buses are prone to fatal accidents.

Besides all these, the condition of public transportation in the context of Nepal is extremely poor. It has been causing noise pollution, air pollution, and so on. The rules and conditions are not being followed by the people and transport owners. The fare rate has increased at a very high level. Conductors are using advantages from it and taking fares more than its original fare rate. Suppose the fare rate from JADIBUTI to Maitighar is Rs.18, but it is common that they are asking Rs. 20 as fare rates. They are breaking the rules and regulations made by the government just to get more profit. Public transport in Nepal does not stop at the precise address that a passenger is traveling to, forcing them to look for additional means.

Proper hygiene is also not maintained. People gather at gangway area, there is no proper place to walk, Youngsters go and sit at the female and orphanage seats. Some public transport crews play too loud music forcing the passenger to signal at the driver to stop. There is a limited number of seats but to get profit public transporters add more and more people no matter what the passengers are thinking. They use all kinds of offensive and vulgar words. The condition is very bad in the context of Nepal about public transportation because of these and similar reasons as mentioned above.

In the context of transport and public transport anarchy, Sajha Yatayat, a cooperative, has been making efforts to offer international level public transport service in the Kathmandu Valley. However, it is yet to receive full hearted support from the entire sector. With the monopoly of certain transport owners, Sajha has been facing resistance.

Skeleton In The Sandook By Hemant Arjyal 1 day, 23 hours ago