A major soul-searching is definitely required as is the manner in which collaborative efforts take place when it comes to finding solutions to our water problems. 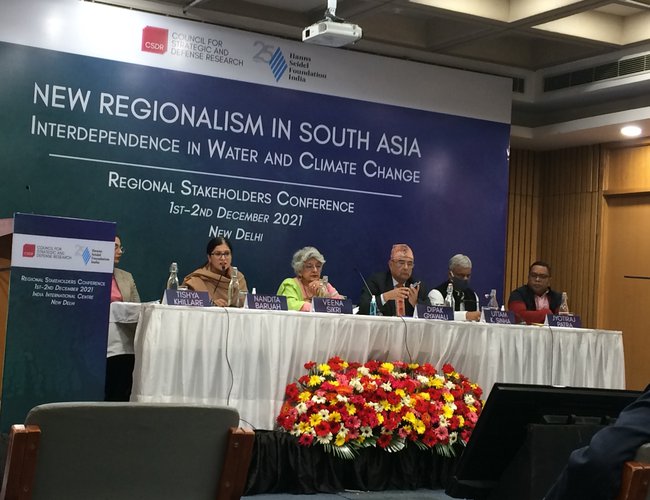 South Asia has been a graveyard of transboundary river collaboration efforts, whether they be the Harvard population studies center-led “Ganges Water Machine” effort in the 1960s or the Ford Foundations “Gift of the Greater Ganga” in the 1980s/90s or the eventually World Bank-hijacked Abu Dhabi Dialogueearly this century. Why did they fail? Why did Indira Gandhi panic and shut down the Harvard Kosi program? Why did Ford give up and now take little or no interest in water? Why is the World Bank’s SAWI struggling towards a sputtering end after the Nepal government formally rejected its flagship strategic basin plan?

A major soul-searching is definitely required as is the manner in which collaborative efforts take place when it comes to finding solutions to our water problems. Getting together for polite talk shops to repeat platitudes won’t lead anywhere: dialogue has to be between contending views with the capacity to listen and respond constructively both conceptually and in practical terms. A modest beginning towards this end was begun last week in New Delhi by Council for Strategic and Defense Research (CSDR) and Hans Seidel Stiftung to rethink transboundary collaboration via new regionalism in the Age of Climate Change.

While it is too much to expect a two-day meeting to “solve” long-endemic wicked problems of water tied with geopolitics and climate change, there were some unconventional questions asked, which, if pursued, would provide new and “uncomfortable” knowledge leading to “clumsy solutions”. If climate change is such an existential problem for humanity, why is it confined to just the UNFCC’s IPCC and a week of COP in a year? Why isn’t there greater societal involvement? While climate change was created by the energy sector, its impact is felt by society through the water sector: why has the water sector been so slow to come up with their solutions to this challenge? When cooperation is confined to state-level bureaucratic mechanisms, it takes four to six weeks for flood data from upstream countries to be transmitted by the downstream country’s capital to the flood-affected villages: why, in this age of mobiles and internet, cannot things be speeded up? Should we still be harping on “data sharing” or should we now move to “data democratization” and demystifying water science? 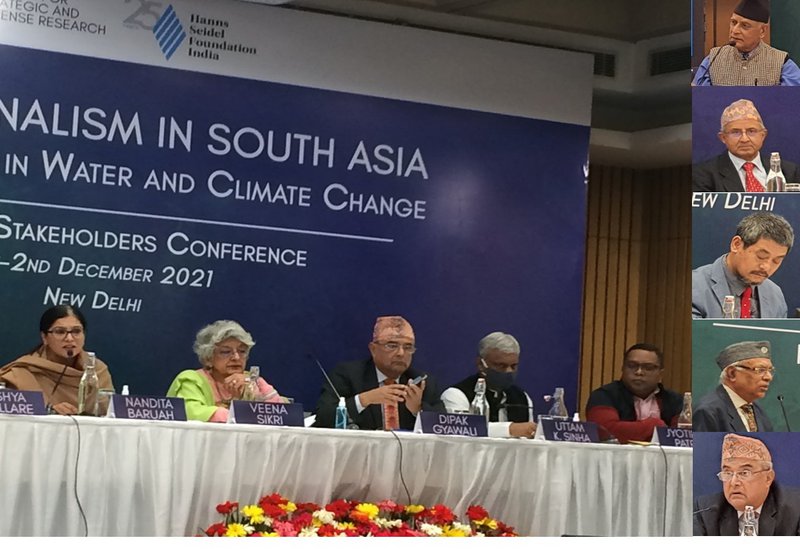 Why is South Asia’s biggest country India still talking carbon reduction when smaller neighbours have moved to pushing for loss and damage compensation? With SAARC near dead and its many useful chartered institutions comatose, with Mahakali Treaty practically dead these 25 years, with its contemporary Ganga (Farakka) Treaty coming up for negotiating auction in a couple of years, where is the forum where such regional issues can be confidently discussed? Given the centrality of water to the new climate concerns, why are South Asian laws and their universities’ water curriculum still largely colonial? Why is sedimentation in Himalayan rivers – and the mincemeat they have made of modern dam, barrage and embankment technologies – not properly addressed for their contribution to new flooding and waterlogging?

In what was called the Patna Initiative in the Himalaya-Ganga of 1992/93, dozens of research questions such as these and many more were asked that are still valid but have not been sufficiently pursued by construction-focused hydrocracies of South Asia. There is a need to decolonize and indigenize our views and perceptions of water in all South Asian countries with a renewed focus on traditional technologies that are commensurate with our semi-arid hydro-ecology. In Nepal and its dealings with downstream India, right from pre-Panchayat days down to today’s Loktantra, Himalayan waters have been conceptualized only through the hydropower lens when the real issue is water storage and multiple benefits that accrue from it, which is where reconceptualization should start from.

Common to all of South Asia is its semi-arid hydro-ecology: it consists of four monsoon months comprising of over 80% of its total annual precipitation (of which some 50% falls in only 50 hours) and eight months of drought broken in the north by winter westerlies and in the south by the north-east trade winds. This is very different from north-west Europe from where most of our water management tools and technologies are imported and where (as in Britain) three weeks without precipitation is considered a drought! All rivers and all life – human to wildlife, forests and grasslands – survive on the monsoon precipitation stored in soil moisture (called Green water) and in groundwater (i.e. Brown water). Despite snow and ice in the High Himalaya, glacial and snow melt contribute no more than nine to 12 percent of the flow of the Ganga and the Brahmaputra, the bulk of the almost 90 percent coming from groundwater backflow.

This basic hydro-ecological fact forces us to re-think our water management strategies, especially our transboundary engagements. No longer should Blue waters (surface water in rivers), important though they are, hegemonize the discourse to the exclusion of White (atmospheric moisture that flows across all boundaries and are now also known as sky rivers) as well as Grey (organically polluted and used water unlike Black or heavily polluted industrial wastewaters) waters in addition to Green and Brown waters. Cooperation on Blue river waters has been at an impasse, primarily because river water allocation is inherently a win-lose proposition requiring moving beyond volumetric sharing to many different trade-offs across sectors to make it a win-win one.

Moreover, transboundary discourse on river waters has been confined to large rivers such as the Ganga, Kosi or the Brahmaputra and has practically forgotten what we call “marginalized rivers”. Between India and Bangladesh, there are some 54 such rivers other than the big three that have not seen much attention. Between Nepal and India there are hundreds besides the big Kosi, Gandak, Karnali and Mahakali whose collective contribution to both flood damages and agriculture well-being are at par with, if not more than those of big rivers. But they have seen little policy attention and even less attempts at better management.

White waters, however much they might have been ignored in the past, can now no longer be so: not only are they are the main source of all other waters but, with massive variability in both time and space with climate change, no longer as predictable as they were in the past. That is where regional cooperation is imperative and urgent: without better understanding of White waters, uncertainties in the availability of Blue and Brown waters cannot be reduced.

The main reason we need to pluralize the perception of water into these six types is because tomorrow’s environmental and economic policy battleground is going to be the footprint of embedded water and energy in our products – from food to industrial products. Not only efficiency (less of water and energy used in their production) but also the type of water so embedded is going to be important. Meat from free-grazing livestock is going to be mostly Green water; but that from factory-grown animals Blue or pumped Brown water with higher investment and energy costs. Dryland cereal crop such as millet and maize are mostly constituted of Green water with low environmental footprint while sugarcane and irrigated crops will have much higher Blue or Brown waters. These differences will mean much while implementing carbon and other taxes to ameliorate climate concerns.

These interlinkages of water, energy and food are also best addressed through the new nexus approach. Integrated Water Resources Management (IWRM) was and continues to be an interesting holistic approach. However, it is only water-focused. Water-Energy-Food Nexus approach goes wider and accepts that these three sectors are intertwined with stress in one reverberating through to other sectors as well. Recent research have also shown that sub-sectors including health, cities, climate and other interstices too provide much fruitful opportunities for innovative problem solving. This includes the area of transboundary waters where the nexus approach clarifies a wider swathe of areas and options where tradeoffs can occur.

Such a widening of the spectrum allows much more fruitful research and dialogue among partners, not just governments but also business communities as well as academic and activist groups. All these three management styles of state, market and civic bodies have very different definitions of “what the problems is” and they differ even more on what acceptable solutions might be like. It is only by bringing together all of them on the same policy table, giving them not only voice but also responding to them constructively even if critically that a new reimagining of water in South Asia can occur.

Water Management In Mountains: Snow Water As An Alternative By Pratima Sharma and Chiranjibi Bhattarai 2 days, 15 hours ago

What West Seti Power Project Can Mean For India-Nepal Ties By Yubaraj Ghimire 3 days, 1 hour ago