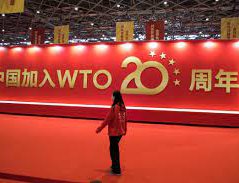 Saturday marks 20 years since China joined the World Trade Organization. The country has come out on top in the value of trade during that time. But it still faces criticism over preferential treatment of domestic companies, intellectual property rights, and other issues.

Xi stressed his plan to proceed with the opening of China's economy. The hope is to take a leadership role in trade in the Asia-Pacific region.

The country's trade and investment have grown significantly since it joined the WTO as it cut tariffs and opened up its market.

China's share of global trade was 3.6 percent before it became a member. But that figure rose to 13.1 percent last year, and the country overtook the United States to become the world's top player.

Beijing's participation in the WTO has benefited domestic manufacturers, including home-appliance firm Galanz.

The company's exports have increased 12-fold over the past 20 years, making it one of the country's top electronics producers.

Japanese companies, including major auto and auto-parts firms, have also expanded their operations in China.

Experts say the country of 1.4 billion people has advanced its position as one of the world's top export destinations.

At the same time, critics point out a number of concerns regarding China's trade practices.

One of them is Beijing's favorable treatment of domestic businesses, such as the provision of state subsidies.

The WTO and others say that China has not been transparent about such policies.

Amid rising tensions with the US, China is trying to bring supply chains onshore. Experts worry that goods manufactured outside China may be shut out of the country's market as a result.

It remains to be seen how Beijing will respond to criticism from other countries of its practices.

Over 1,500 Die In Devastating Earthquake In Turkey By Agencies 5 hours, 40 minutes ago