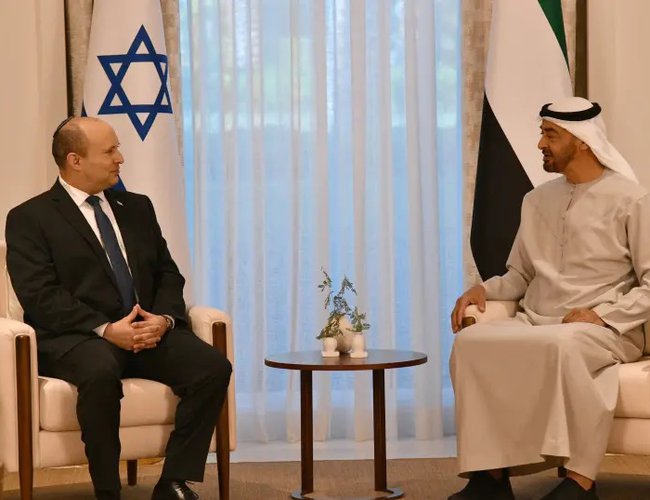 MBZ, as the Emirati leader is known, accepted an invitation from Bennett to visit Israel.

“We held deep, honest and significant conversations,” Bennett said after the meeting. “We spoke about the relative strengths of the two countries, and our goal is to broaden the connection so that there will not only be peace between leaders but peace between peoples.”

Bennett said he is very optimistic that the UAE-Israel relationship, established in August 2020 as the Abraham Accords, will set an example that will be followed throughout the region.

A joint statement from the two leaders’ offices called Bennett’s visit “successful” and “another milestone in the development of warm relations and a tremendous partnership forged between the two countries.”

Among the issues they discussed were private and public sector cooperation in research and development (R&D), technology, food security, climate, water, energy, health and tourism.

The countries plan to establish a joint R&D fund to commercialize solutions to challenges like climate change, clean energy and agriculture, and to advance a comprehensive economic partnership agreement.

Bennett and MBZ spent four hours together, first meeting with their advisers, then having lunch in the crown prince’s home, followed by a one-on-one meeting that lasted for over two-and-a-half hours.

Emirati Foreign Minister Abdullah bin Zayed greeted Bennett upon his arrival in Abu Dhabi Sunday night. They held a short meeting in which they discussed the importance of tolerance and religious moderation, a source in the prime minister’s entourage said.

Bennett has sought to emphasize economic ties with the UAE on this visit, and sources on the trip said Emiratis have expressed interest in the prime minister’s background as a hi-tech entrepreneur.

However, both Israel and the UAE view a nuclear Iran as a major threat, and the topic is likely to arise, as well.

Bennett’s visit comes as world powers continue negotiations in Vienna with Iran over its nuclear program, and Israel fears the US will lift sanctions without exacting major concessions from Tehran.

Bennett was the first Israeli leader to visit the UAE after several attempts by his predecessor Benjamin Netanyahu were thwarted due to COVID-19 restrictions, repeated elections and, in one case, a dispute with Jordan.

The prime minister will not be traveling to Dubai to see the Israeli Pavilion at Expo 2020 or meet with other business leaders, due to the latest wave of the COVID-19 pandemic.

Bennett traveled with a smaller entourage than usual. The press corps that had been originally invited on the trip were disinvited on Saturday night. However, the prime minister will still be staying in Abu Dhabi overnight.

Ukraine welcomes US Offer Of Long-Range Rockets By Agencies 17 hours, 47 minutes ago

US Shoots Down China's Balloon, Says Defense Department By Agencies 18 hours, 2 minutes ago