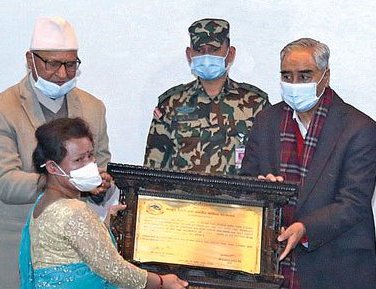 Ministry of Law and Parliamentary Affairs had announced to felicitate advocate Harijan and Tamang with the award last month.

Addressing a human rights prize distribution programme organised by the Ministry of Law and Parliamentary Affairs on Sunday here, Prime Minister Deuba said, “The government is dedicated to protecting all the human rights mentioned in the Universal Declaration of Human Rights (UDHR), 1948.”

He said, “Nepal has enhanced its national laws in accordance with the spirit of the UDHR and will continue doing so in the upcoming days as needed.”

Prime Minister Deuba said that the improvements made and successes achieved by Nepal in the sector of human rights were being lauded internationally.

He said, “As a result of efforts made by Nepal in protecting and promoting human rights, representatives of Nepal have been elected as member of the United Nations Human Rights Council twice.”

He added that the nation was actively working to ensure effective implementation and protection of human rights of all citizens even during the COVID-19 pandemic. “I request the human rights activists, experts, and professors to aid the government in its campaign to protect human rights,” added the Prime Minister.

Stating that protection of human rights was important in enhancing democracy, Prime Minister Deuba said, “Democracy cannot be ensured without human rights and rule of law will not exist in absence of democracy.”

Speaking at the programme, Minister for Law and Parliamentary Affairs Dilendra Prasad Badu said that the government was alert in preserving human rights.