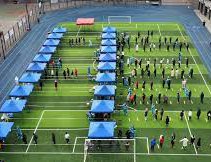 Authorities in Tianjin, China, said on Wednesday that 77 people have been found infected with the coronavirus, prompting a second round of testing to start for the populace of the city neighboring Beijing.

Officials are again conducting PCR tests on the city's over 13 million residents in an effort to contain infections.

The city identified two cases of the Omicron variant on Sunday. Officials then ordered a first round of blanket testing after confirming the infections were from community transmission.

Beijing is set to open the Winter Olympic Games in less than a month. High-speed railway and bus services from Tianjin to Beijing have been suspended to limit the flow of people between the cities.

The inland province of Henan has also confirmed community transmission of the Omicron variant. In the city of Xi'an in Shaanxi Province, about 13 million residents have been under lockdown for three weeks as the Delta variant has spread in the city.

Severodonetsk Under Full Occupation By Russia By Agencies 1 day, 2 hours ago

Ukraine Poised To Launch Counteroffensive By Agencies 2 days, 2 hours ago