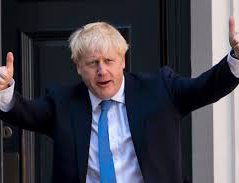 An inquiry in the UK into parties at Prime Minister Boris Johnson's office and residence during COVID-19 lockdowns found there were failures of leadership and judgement by those working at the heart of the British government.

A report released on Monday says some of the gatherings in question represent a serious failure to observe the high standards expected of government.

It also points out that there were "failures of leadership and judgement by different parts of No. 10 and the Cabinet Office."

The parties were reportedly held at No. 10 Downing Street in 2020 and last year, when tight COVID-19 restrictions were in place.

Johnson has admitted attending a party in the Downing Street garden in May 2020.

Following the release of the report, parts of which were withheld due to an ongoing police investigation, Johnson apologized at the House of Commons.

He said, "We must look at ourselves in the mirror and we must learn."

Johnson has brushed off calls to resign and vowed to continue leading the government. But the pressure is mounting not only from the opposition, but from within his own party.

Over 1,500 Die In Devastating Earthquake In Turkey By Agencies 4 hours, 36 minutes ago