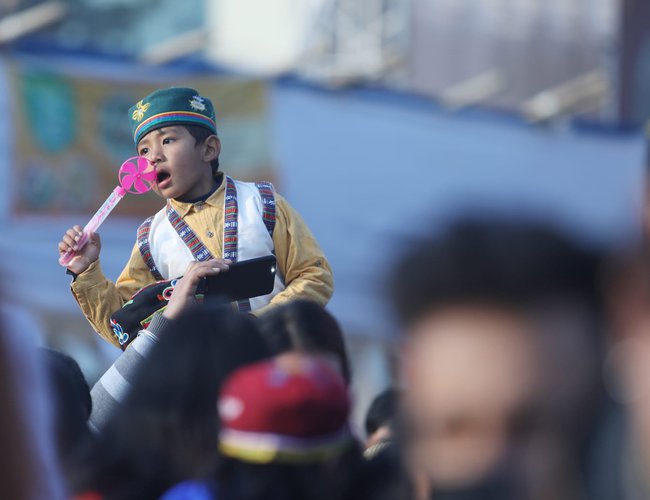 Today is an official holiday for celebrating Sonam Losar Lho means year or age and Sar means new or fresh. The word Lhosar means New Year or beginning of new era. Tamang celebrate theirnew year on the first day of new moon or in other words the very next day after the no-moon day of month of Magh (Magh Sukla Pratipada).

Losar (Lo - year, sar - new) is a national holiday of tibetan buddhism celebrated in the mountainous and hilly regions of Nepal, China - our northern neighbors as well as various regions of Asia such as Malaysia, Thailand, Bhutan, India, Laos and Japan where buddhism practitioners are concentrated. It takes on different names and is celebrated by the ethnic groups that recognize it in their own individual ways, for instance, the Gurungs call it "Tola Losar" whereas the Sherpas celebrate "Gyalpo Losar". Today is "Sonam Losar" and is commemorated with much fanfare by the Tamang community.

One of the indigenous group's of Nepal with their language being the 5th most spoken in Nepal, the Tamang community is famous for nurturing a deep respect for nature and having abundant skill in horse riding. They recognize 12 different years and represents these years as the year of the mouse, cow, tiger, cat, vulture, snake, horse, sheep, monkey, dog, bird and deer with the mouse being the first year in rotation, and deer the last. These 12 years also have been found to represent the 12 signs of the horoscopes as well. It is believed that this system of representation of the years traces it's roots to China where the new year is also named after different animals. Only sharing a origin with the Chinese new year however, this new year is celebrated by the Tamang community in their own unique style.

When is Sonam Losar

This year Sonam Losar is on Magh 17, 2070 as per Bikram Sambat Calendar and on January 31, 2014 in English Calendar. This year it is 2848th year of Tamang’s New Year celebration. The Tibetan calendar is made up of twelve lunar months and Lhosar begins on the first day of the first month. However, the days of celebration differs in different Tibeto-Burman communities.

Sonam Losar falls on different dates each year in Bikram Sambat and English calendar. This calendar is ancient Tibetan/Chinese lunar calendar. The New Year usually falls on the second new moon after the winter solstice (rarely the third if an intercalary month intervenes). That is it is on Magh Sukla Pratipada, under eastern lunar calendar.

Tamang has a tradition of counting year with association of symbols of 12 different animals. It starts with Rat and ends on Boar.

How do we celebrate Sonam Losar

The last day of 12th month of the year is a time to clean and prepare a welcoming atmosphere for New Year. The monasteries perform a special ritual with mask dance to expel negative forces. The New Year celebration varies. People go to Monasteries, Stupas and Chaityas and perform ceremonial rituals there.

People buy new dresses and decorate their houses according to their living standards. Tradition is there every family member thoroughly cleans their house to sweep away any bad fortune in hopes to make way for good incoming luck. Windows and doors are decorated with colorful papers and cloths and couplets with popular themes of "good fortune" or "happiness", "wealth", and "longevity". People get together and have dinner with families.

The feasts include items as pigs, ducks, chicken and sweet deserts.

Musical programs are performed with Tamang Selo in the beat of Damfu.

Now-a-days Tamangs in Kathmandu and nearby gather in Tudikhel to celebrate of Soman Losar. They organized different programs there. The attractions are generally pooja, Lok Dohari competitions, Food Festivals, Dramas, etc.

Tamangs are seen in their own costume dresses. The Tudekhel (Open public ground in heart of Kathmandu city) is full with the crowd with Losar celebrations. Women and girls wear their dresses and jewelry and most of them wear a traditional hat.

Losar brings joy to all Tamang and Nepali as a whole.

Tamang and their history in Brief

Tamang is one of the largest communities in Nepal. Tamang are about 8% of total population of Nepal. Tamang are very ancient tribe of Nepal and are the original people of Yambu. Tamang is made up of two words, Ta is Horse and Mang is Rider. It is assumed that they were connected with business of horse trading or riding, some view it differently, and they consider Tamang as Horse warriors.

Large numbers of Tamang people live in the middle hilly region to Himalayan range of Nepal including Capital city Kathmandu. Tamang have generally been lived in districts of Rasuwa, Nuwakkot, Dhading, Makawanpur, Chitwan, Sindhupalchok, Kavrepalanchok, Dolakha, Ramechhap and Sindhuli. However, they are now all over Nepal, and even in so many countries around the world. Some of them are migrated to eastern India especially to Darjaling, Sikkim, Meghalaya, Asham, Nagaland and Guhati, so as to Bhutan and Burma.

Tamang are very rich in their tradition and culture. They have their own language, culture, dresses and social structure. Tamang generally believes in Buddhism. It is said 90% of Tamang are following Buddism as their religion. Tamang language is one of the members of Tibaten Burmeli family.

The Tamangs have their own music. Their musical instrument is called Damphu. It is a small round drum where one side of the circular wood is covered by the skin of a goat and is joined with thirty two small bamboo pencil-like pieces.

It is said long back, Tamang used to move from places to places for food and shelters. They live on wild fruits, yams and animals’ meat. They used to hunt for the food all day long and share food with the people living together in the temporary shelters. Once it happened, a leader of a group named Peng Dorjay went for hunting food along with some members, they were empty hands throughout the day. In the evening they were returning back home without food, the leader saw a goat grazing on a high cliff. He aimed his arrow at the goat and killed the goat. He skinned off the goat and dried the skin on the under the sun. As soon the skin went dry, he made a small, round drum and started playing it, thanking God for food. The same drum is called Damphu.

Tamang songs are known as Tamang selo. There are songs of humor and wit, philosophical thoughts, and of life's joys and sorrows. Tamang Selo has transcended the boundaries of linguistic, cultural and social limits. Tamang Selo music is one of the very popular Nepali music through Nepal.

Two Shilas Left For Ayodhya From Janakpurdham By Agencies 6 days, 6 hours ago