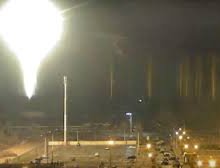 Russian forces have attacked a nuclear plant in southeastern Ukraine and taken control of the facility.

The attack occurred at the Zaporizhzhia plant, which has six reactors and is the largest in Europe. Russian troops had previously seized the Chernobyl nuclear plant.

The forces launched artillery at the complex on early Friday, sparking a fire at a training center but not at the plant itself. Ukrainian fire crews managed to extinguish the flames.

The national nuclear regulator confirmed that Russian troops seized the facility. It added that operations were continuing normally and safely under the control of plant workers.

The Director General of the International Atomic Energy Agency, Rafael Grossi, said the reactors were not compromised and that no radiation escaped.

Ukrainian President Volodymyr Zelenskyy condemned the attack. He said Russia has become the first country in history to strike a nuclear plant.

Ukraine welcomes US Offer Of Long-Range Rockets By Agencies 4 hours, 45 minutes ago

US Shoots Down China's Balloon, Says Defense Department By Agencies 5 hours ago