Echoes In The Valley, Kirtipur

Scattered on the slopes of Kirtipur was a heterogeneous gathering of artists joining on this special moment to share their love, their culture and of course, their art. 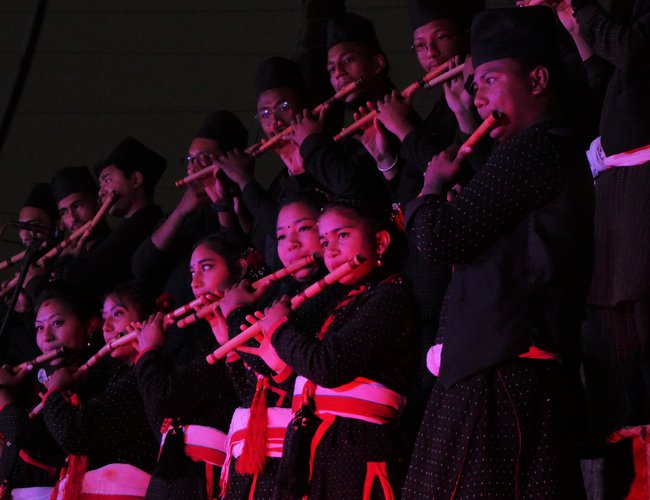 If you heard traditional music this Saturday, it surely came from Kirtipur. On the 26th of March, the city welcomed the new edition of Echoes in the Valley. This not-for-profit music festival witnessed its first ever edition in 2017 and it has been going on since, even if last year the festival took place virtually and in 2020, it had to be canceled due to Covid. But this year, the festival came back full force with more than 5000 people according to the organizers.

It hosted 11 different groups of artists from various nationalities and genres, as well as activities held from temple to temple. Indeed, from 9.30am to 9pm, Kirtipur resonated from every corner of every street. From the Happy Village Orchestra to Ser O Jooni, and from Nanashi to Nhuchhe Bahadur Dangol & ensemble (see the full list on their website at the end of this article), the day was full of surprises and mirth. Scattered on the slopes of Kirtipur was a heterogeneous gathering of artists joining on this special moment to share their love, their culture and of course, their art. You could enjoy, in Satah Kwo, a workshop on calligraphy and get your name written in ink, or you could go to Chilancho for an exhibitions of old photos from Kirtipur. You could also get a look at the demonstration of handloom making in Saqmāju Dya and visit the exhibition on Nhuchhe Bahadur Dangol in Bagh Bhairab. This annual free festival is open to everybody, its goal being to reach over any kind of barriers to spread the love of art and to remember Nepal’s extensive music heritage.

To get a good understanding of the festivities, I asked a few questions to Bhushan Shilpakar, director of Shilpakar & Co., producer of Echoes in the Valley:

Do you have an idea of the number of people present at the festival?

“We are conservatively estimating between 5000-8000 people attending (9:30AM- 9PM) during the eleven and half hour long festival programming yesterday.”

What was it like, finally being able to organize (not virtually) the festival again?

“It feels great! Maybe people are fed up of sitting at home, or isolating, or having to worry about getting sick, so this outdoor event was a perfect opportunity for them to be socializing and have a semblance of a new’ normal’. It was a good decision that we responsibly postponed this festival that was set to happen two years ago. We were keeping an eye on daily positive cases of Covid and were mindful of government restrictions. Luckily for us, Covid cases were on the decline and the government lifted the ban on large gatherings three weeks ago. Saturday’s event was the biggest music festival to take place in Kathmandu valley after the pandemic, but if you look at our schedule we were also strategically planning the day-long events in such a way that not everyone had to be gathered in a single place at any given time. There were simultaneous performances, workshops, exhibitions, demonstrations, tours and all sorts of stalls to engage crowds from toddlers to senior citizens.”

How did you choose the artists performing? Was it hard?

“Our vision is clear– we promote folk, traditional and indigenous music. We choose our artists keeping this as a basis. We also feature Nepali and international artists from other genres to not only spice up the mood of the festival but also to show that folk, traditional and indigenous music can go hand-in-hand with modern and contemporary music. At EITV, we also take pride in being a festival that spotlights young or new artists and bands from Nepal by letting them open the festival. We are also constantly trying to decentralize and connect to artists beyond the Kathmandu valley. This year, we were able to introduce both renowned and up-and-coming artists from Taplejung, Kanchanpur, Khotang and Udaypur.”

Why is it important for you to have this festival?

“When we started six years ago, there was no music festival dedicated to folk, traditional and indigenous music. I am sure you noticed that we try to keep the vibe as local as possible, which means that we don’t build large stages, or use unnecessary amounts of hoarding boards as stage backdrops. Instead, we use pre-existing dabalis that are raised platforms built hundreds of years ago for public gatherings; tucked away courtyards; and temple grounds as performance venues. During the festival, we promote food stalls run by the local community that sell local food and beverages. Music scene in Nepal and around the world is predominantly male. At EITV, we make a constant and consistent effort to always feature as many female artists as possible. This year, we are happy to share that over 60% of our performers were women.”

Finally, what do you take from it, what does this festival brings you?

“If you watched the final performance yesterday, as per tradition, we conclude the festival with a performance by a Nepali maestro. Last night, it was Nhuchhe Bahadur Dangol, a veteran percussionist and his diverse ensemble. When the seventy-three year old Nhuchhe Bahadur strapped on the large dhimé drum and began to beat on it, all one could see and feel was his joy. His joy was palpable. And if you looked around the temple grounds where he performed, it was packed with audiences who were local and who had traveled from near and far; audiences from all sorts of backgrounds and ethnicities; and audiences who were as young as a small child to the elderly who were dancing. We do this for joy. The festival allows us to come together and build communal joy.”

At the end of the day, a Newar feast was organized for 1000rps the ticket where you could enjoy traditional Newar food such as Samay Baji. Attendants of the festival could indeed deeply immerse themselves in Nepal wide culture for the day. And well, see you next year? We shall wait for a beat.

Fanny is an intern from France. 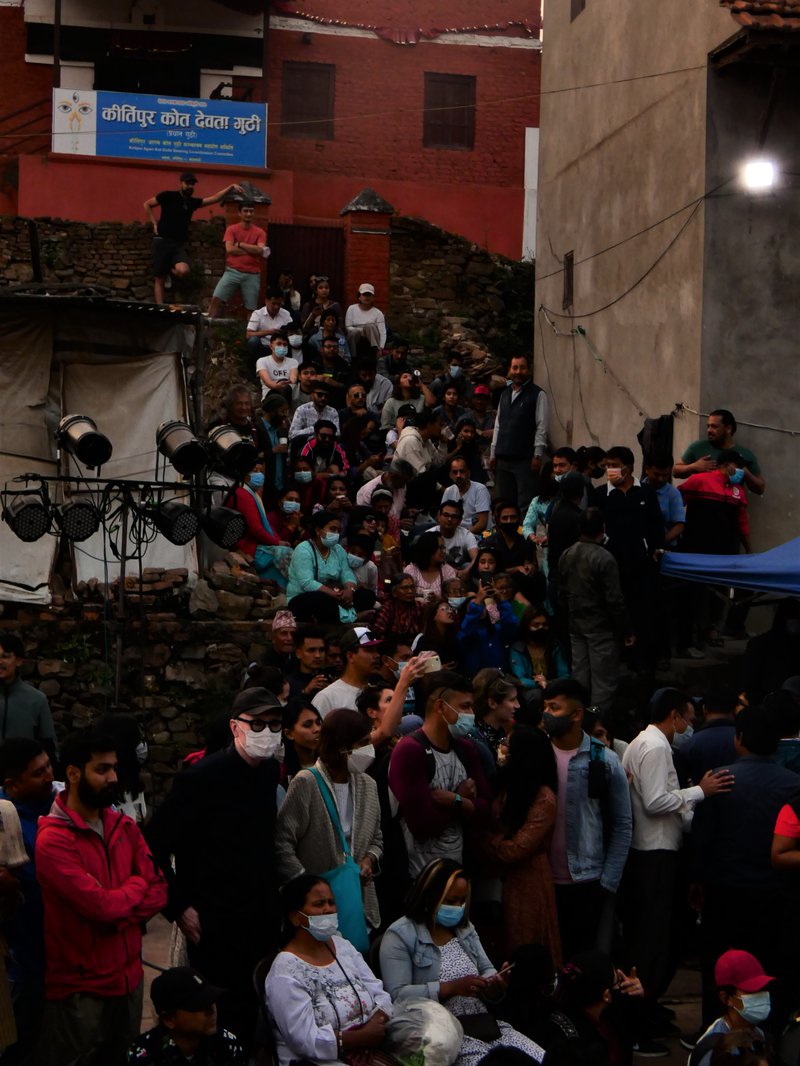 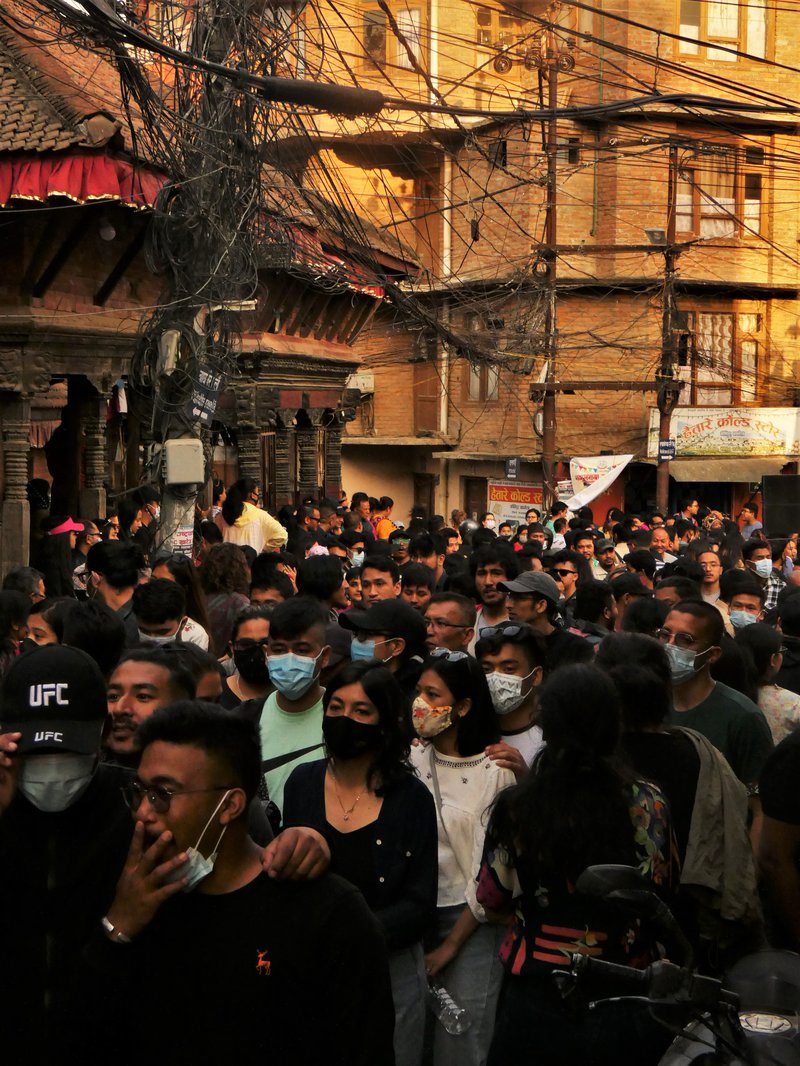 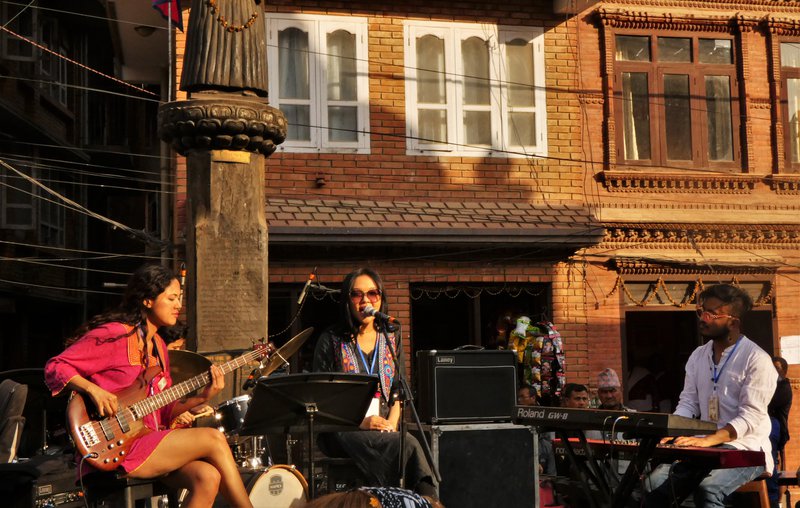 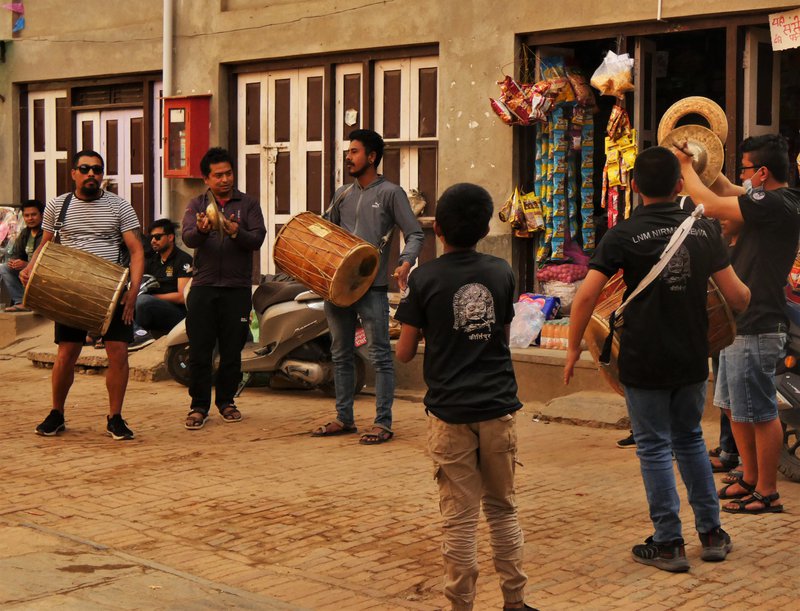