Like all other 10 commissions, Muslim Commission has also presented three annual reports to President and the government has already tabled them to the House of Representatives. However, it is yet to be debated in the Committee of House of Representatives. Given such a situation, SAMIM MIYA ANSARI, chairperson, Muslim Commission, Nepal, spoke to KESHAB POUDEL on various issues regarding the role, accountability and effectiveness of the commission to raise the voices of minority Muslim community of Nepal. Excerpts: 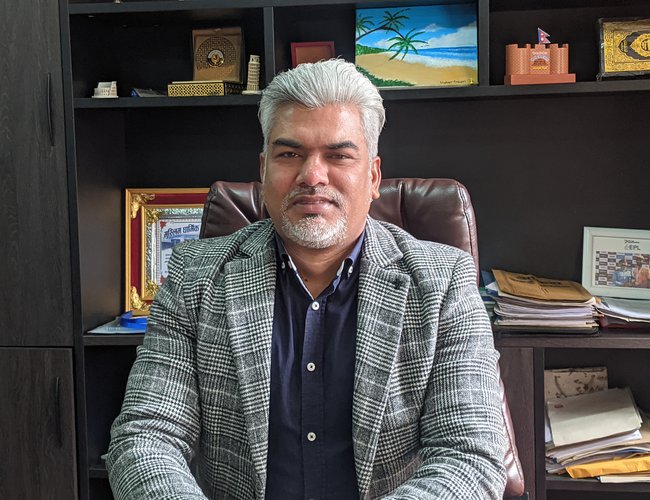 You have already presented three annual reports to the President. Have your reports ever been discussed on concerned parliamentary committee?

Once the commission presents the report to President, it is handed over to the government to table it to parliament for further discussion. However, we are yet to receive any information or notice for the discussion on the reports. Generally, we are maintaining annual formal rituals.

Communities have high hope on our commissions. Their expectation is getting higher following the formation of the commission. People think that all the problems will be settled through the commission. Given the government’s views toward us, what I can say for sure is that we will not be able to fulfill the expectations of the communities. However, we have been working hard to raise awareness in various social issues including domestic violence and gender. With limited resources and apathy of all concerned stakeholders towards us, we are unable to address all the problems and concerns of the community.

As you said you have presented three annual reports to the President, where your reports are now then?

We read through the newspaper that president handed over reports to the government to table at parliament. Likewise, we also read the news that the concerned ministers tabled our report in the parliament. That is what the information we receive about our results. However, we have not heard anything about the discussions on our report.

What do the Parliamentary Committees do then?

Our report goes to the Women, Children and Social Welfare Committee of the House of Representatives. I am fortunate enough to say that Niru Pal, who is the chairperson of the committee, invited us once to discuss on the report. We took part in the half day discussions. However, the recommendations and direction given by the committee is yet to be addressed. That is only one time. Our recommendations and suggestions are related to the committee. The report presented by us should have been debated intensively. It is unfortunate to say that the work of debating our report is yet to start.

Why are the reports of the commission so important?

Our reports are linked with the future of community. For instance, the report presented by the Muslim Commission is all about the state of Muslims, their grievances and difficulties ignored by various state sector. Our reports highlight what needs to be done to empower Muslim community, their development and participation in the various sectors of the state. To fulfill the objective of establishment of the commission, the committee of House of Representatives should have spared some time. Only through discussion, we can suggest and direct the government what it needs to do for the empowerment and protection of Nepali Muslim Community. Although various organizations have been working in the areas of inclusion, upliftment and empowerment of Muslim community, what we have seen is that there is nothing like this. The state of Muslim community is very bad. They are an economically, socially and political excluded group. Although the government should have been serious about the problems faced by Muslim community, I have not felt this is the case so far.

How about discussing it in the provincial level and local level?

As per the constitution, presenting the annual report to the President of Nepal is the main responsibility of the commission. President hands over the report to the government to table it in the parliament for further discussion. This entire process is to make our commission accountable to the people. Although there is no such provision, the commission has been sending it to the provincial head and provincial legislature. At a time when even Federal House of Representatives has not been taking any step to discuss and debate on our report, the discussion at Provincial level and local level has no meaning. Provincial level and local level have no constitutional right either. If federal parliament ignores our report, there is no sense to discuss in province and local level.

So where is the commission accountable now for its work?

Like all other commissions, we are accountable to the people through the federal parliament. Only federal parliament can direct us and if necessary remove any member through impeachment motion. Given the current situation, we are unable to address the accountability part. Although federal parliament is not responding to our report, the commission has envisaged its own strategy to reach to the people. We have our website; complaint boxes and direct hotline to listen to the voices of people’s grievances. We do regular visit and meeting with the community at the grass root level. We are knocking the doors of different government agencies.

How much resources have been allocated to your commission?

It is not the commission to ask budget for itself. However, the government has to allocate us adequate budget in accordance to our needs. Since Muslim Commission is a community related organization dedicated to the betterment of community, it is the government to decide what they want to do for Muslim Community’s empowerment and development. As you know, Muslim community has been living in Nepal since centuries and they have been living in all 77 districts since our basic work is to conduct the research and study of the state of group, the government should provide us budget to perform such work. As per the data of census report of 2011, Muslim population consists of 5 percent. However, we don’t have any exact and detailed data about their economic, cultural and social status and their state. For this, we need budget for research. In a similar way, we need budget to launch awareness generation activities at the community level, we need budget for it.

What are the main problems faced by the community as such?

Muslim community has been facing all kinds of problems in Nepal. Even they don’t have schools to send their kids. There is rampant illiteracy among the Muslim community. As the condition of Madarsa have been dilapidated, it affects the quality education of Muslims. There is the need to improve the state of Madarsa and integrate the Muslim in modern education system. For all these, there is the need of a study and it requires budget. Finance Ministry should have consulted us regarding our needs and demand before allocating the budget. However, Finance Ministry has been arbitrarily allocating the budget. As I said earlier, the thing is not moving in the way visualized by the constitution.

As you said you receive nominal budget, how has Muslim Commission been implementing the programs?

Despite inadequate and small budget, Muslim Commission has been able to implement and launch its programs throughout the country to protect the Muslim community. Of course, the state has not been supporting us. We are able to perform our duty and role reaching the community. We are doing our best on the basis of fund provided to us using it for maximum benefits.

You have also mentioned that the commission has been receiving meager budget. How do you function then?

Frankly speaking, there is virtually no budget at all for other activities. We have to perform the work for the community. Of course, much budget is allocated for salary, employees’ fund, and petrol and house rents. The beauty of the commission is that it has been producing maximum results with its limited resources. Since we are here to work for community, this spirit has been inspiring us to do work. We have been working under a Terms of Reference. 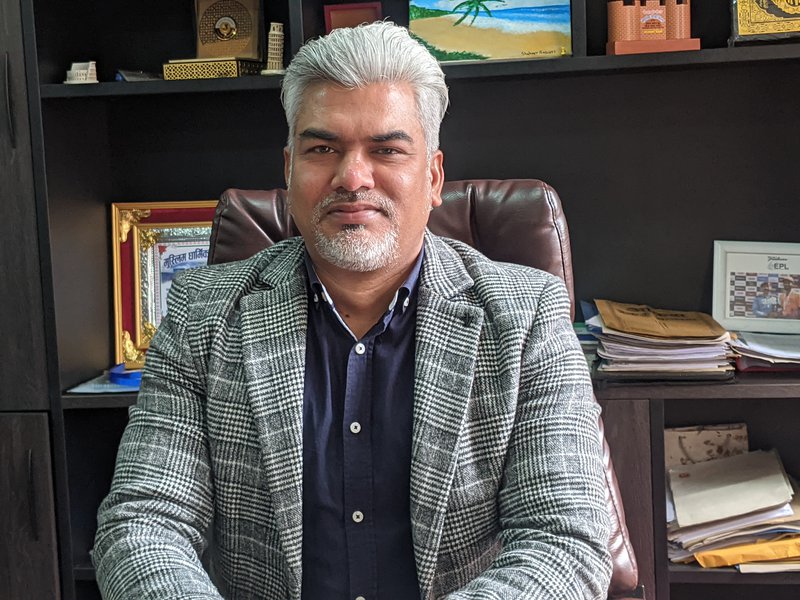 What are the priorities of the commission?

We have been mostly focusing on research and study now aiming to support government to develop programs dedicated the Muslim community. Similarly, we have also been launching the awareness campaign and conducting special class for preparation of Public Service Commission examination.

As per the constitution, there is a provision that the House of Representatives will review whether Muslim Commission is required for the country. How do you justify that this commission is needed for beyond 10 years?

Although the constitution was promulgated in 2015, I was appointed here in 2018 and I am just running in my third-year tenure. The members of the commission were appointed just last year. Muslim community has been living in very critical conditions deprived of their rights and duties. Thus, it is impossible to solve their problems in the matter of five or ten years. They require sustained activities for decades. Thus, the condition for reviewing the need of commission is unjustifiable. The time is yet to ripen for the review of the commission. The commissions were formulated late and faced the covid-19 restrictions. It is impossible to justify the review of existence of the commission.

But, the constitution has an article saying that the House of Representatives should review it?

Whatever the constitution says, it needs to be suspended for some time to come. The commission is required till all the members of the community are empowered and strengthened. Each commission should be given adequate resources and human resources to launch awareness campaign and implement programs to empower community. People are above the constitution.

What kind of complaints are received and what is their volume in the commission?

Although the constitution of Nepal has recognized Muslim under a separate cluster, due to lack of laws Muslims are yet to receive separate reservation quota for them in civil service, military, police and other areas of state. It is unfortunate to say that Muslims are still under Madheshi cluster as per the reservation act passed by the Interim Constitution. Muslims are now contesting all kinds of government exam either in open or in Madheshi cluster. The commission has been suggesting to provide separate cluster of Muslim so that they can secure their own reservations. All our three reports, we raised this issue but the House of Representatives is yet to pass the law as per the letter and spirit of new constitution.

Since Muslims have been living in Madhesh, what is wrong to put them in the same cluster?

Of course, Muslims have been living in Madhesh and facing similar discriminations. Muslims have been facing double discrimination Muslims and Madheshi. We want separate cluster for Muslims as envisaged by constitution. We live in Madhesh with similar feature but we are Muslim. We have struggled for long to get recognition as Muslims. We have already written numbers of letters to all concerned including prime minister, parliament.

What are the major problems?

One of the major problems is lack of land for burial for Muslims. Most of our burial place (Kabristan) is open and they are under encroachment. In many places, the public deny to use our old Kabristan for burial purposes. We don’t have land to perform burial. No one is listening to us. We have been receiving many complaints regarding this. With lack of budget and space, the conditions of Madarsa are getting worse day by day. There are complains related to domestic violence and gender inequalities.

Nepal Has Made Significant Progress In Increasing Its Clean energy Generation Capacity: Dinesh Kumar Ghimire By Keshab Poudel 4 weeks ago

What Did Nepal Learn From Ghana? The Perspective By A Correspondent 3 months, 1 week ago