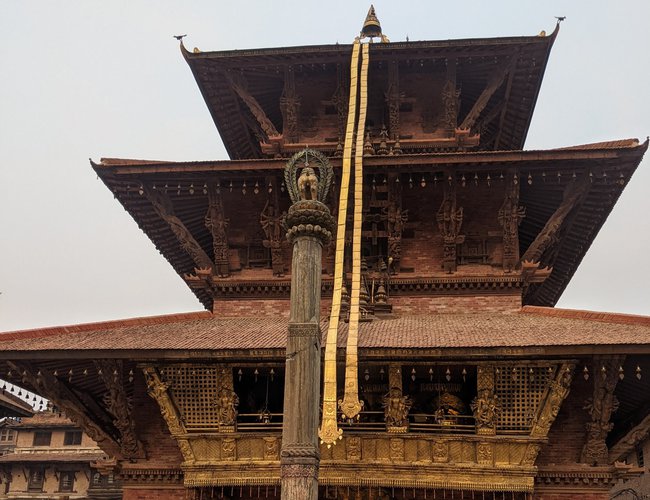 Patan Durbar Square has already been restored and some are in the progress. With the local initiatives and local participation, Bhimsen Temple of Patan has proved a successful model of local initiative.

Patan Durbar Square a historical architecture has been on the UNESCO World Heritage list since 1979. This is deeply linked with today's urban lifestyle, public liturgical traditions spaces, and Newari culture's living traditions. The earthquake on April 25, 2015, made these monuments crumble and fall apart. The baneful event caused damages that were of cultural importance to the Nepali and Newari heritage.

Amongst many religious sites, the Bhimsen temple was one of the historical architecture which was damaged by the massive earthquake. The upper stairwell's wooden structures were mostly destroyed by the temple. On January 21, 2019, the reconstruction work began after a three-year hiatus. After no one else showed interest in rebuilding the destroyed temple, locals banded together to gather funds under the motto "Let us build our history on our own." The Indian government had promised to rebuild the temple, but it was also canceled. As a result, the residents took it upon themselves to restore the campaign.

In accordance with the Venice Charter, restoration activities preserve historic materials and authentic records (1964). The instructions presented during the Second International Congress of Architects and Technicians of Historic Monuments formed the foundation text of the International Conference on Monuments and Sites, and have influenced conservation efforts across the world. Restoration, according to the charter, "must end at the point when guesswork starts, and in this instance, any supplementary work... must bore a contemporaneous mark" (ICOMOS 1965, Article 9). This Eurocentric viewpoint favors an "original" above a reproduction and stems from a concern of tampering with any monument's artistic or historical evidence.

The temple, which is located in the northern part of Patan Durbar Square and has three stories, is dedicated to Bhim, one of the five Pandavas brothers who are the main protagonists in the Hindu epic Mahabharata.

The historical site dated back to 1680, built by Srinivasa Malla located in the northern part of Patan durbar Square. The three-story temple is dedicated to Bhima, one of the five Pandavas from the Mahabharata who was recognized for his courage and power.

He is revered as the deity of trade and commerce in Newar culture. There are various temples dedicated to Bhimsen in Nepal, but the one in Patan Durbar Square attracts the most visitors because of the temple's drawings and woodwork depicting Bhimsen as a man of tremendous strength smashing an elephant with his knee or lifting a horse into the air