The Bungamati, a traditional Newari settlement, has been revived with a message, conservation for promotion of tourism 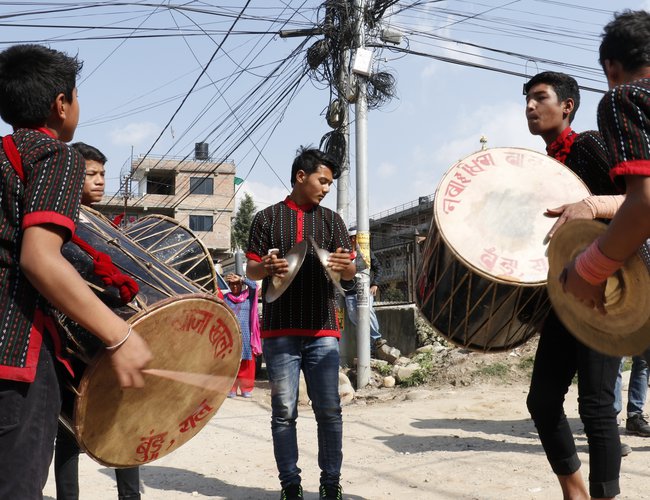 Driving a few kilometers from congested and crowded urban settlements of Patan and Kathmandu, one can find well-preserved traditional Newari settlements in Bungamati and Khokana.

These two Newari settlements showcase how heritage sites restoration and promotion of traditional livelihood need to be taken side by side to promote sustainable and green growth in heritage settlements.

This is also an example to show how different organizations can work together to Promote Sustainable Tourism and Green Growth in Heritage Settlements of Kathmandu Valley, contributing to the overall SWITCH Asia objectives of promoting sustainable development, and reducing poverty and contributing toward mitigating climate change. European Union has been financially supporting the project.

Following the completion of the project, it has been promoting entrepreneurship among women and youth. With SME engagement and investment, product innovation and sector campaigns, the project hopes to support the livelihood of the people. 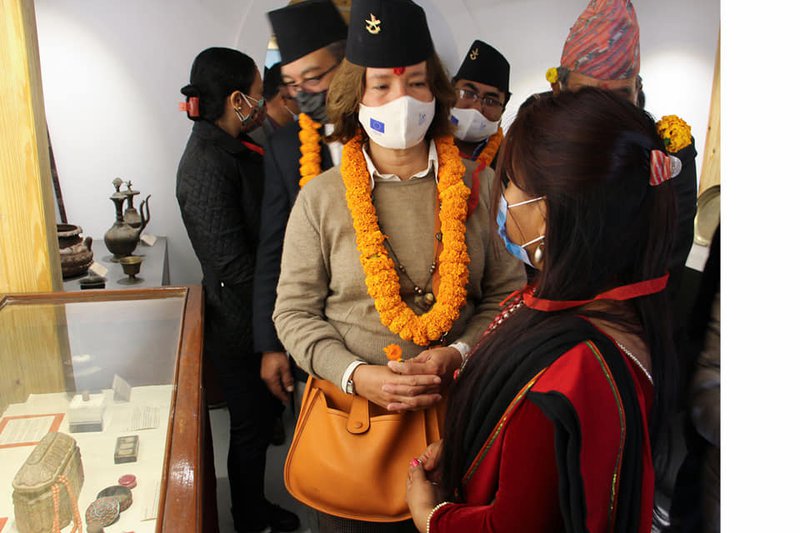 One can find the preservation of traditional attire, music and foods of Bungamati at work in a traditional Newari settlement.

Handed over to the local community last February 2021 by the ambassador of the European Union to Nepal Nona Deprez and Mayor of Lalitpur Chiri Babu Maharjan, Khokana and Bungamati are now attractions of domestic tourists as well.

Damaged and devastated by the Gurkha earthquake in 2015, the Newari settlements have been revived, preserving their past glory.

“The Project joins hands with the Ministry of Urban Development, Ministry of Culture, Tourism and Civil Aviation for regular consultation and policy level reforms whereas Lalitpur Metropolitan City is co-partner for implementing the assigned activities and programs in Bungamati and Pilachhen,” said Prabin Bajracharya from UN-Habitat.

“Parya Sampada mainly engages in two heritage settlements of the Valley. Heritage conservation has already started at the community level in Pilachhen Lalitpur Municipality (LMC) Ward No 7 and Ward No 22 of Bungamati,” said Bajracharya.

UN-Habitat along with its partner organization Centre for Integrated Urban Development (CIUD) SAARC Business Association of Home-Based Workers (SABAH) and Lumanti are supporting fostering the tangible and intangible heritages of Bungamati and Pilachhen area.

Along with the construction of tangible heritage sites, the project has also contributed to promoting local handicrafts, music and food providing training to the local youth.

“As we have provided skill training to youth making traditional foods like Yomari, musical instruments like flute and handicrafts. Similarly, we also provided entrepreneurship training equipping skills for organized business and digital marketing,” said Deepak Basnet, Community Development Officer of SABAH-Nepal. These training enhanced the capacity of local people in marketing and make their business organized.”

The earthquake damaged 563 of 856 houses in the core area of Bungamati. Most of the buildings that survived were also badly damaged and were left unusable. Major temples and shrines were lost including Machhendranath, Hyagriv Bhairav and Manakamana temple. The biggest loss was the private houses with heritage values. In the last six years, almost everything has been revived.

With the revival of the city, local communities of Bungamati have already seen the results. Although COVID-19 has badly shaken Nepal’s tourism sector due to the lack of foreign tourists, Khokana and Bungamati are attracting domestic tourists.

During the last four years, Bungamati and Khokana have seen being drastically transformed as cities suffering devastation and destruction to cities reviving their traditional settlement.

With a strong pool of young trainees with it, Bungamati has enough strength for the sustainable livelihood of the local community.

Realizing the importance of a formal institution to train the local youth, the project has designed a training center. This is a major part to train youths in traditional skills. This is important for sustainable tourism promotion and employment generation. 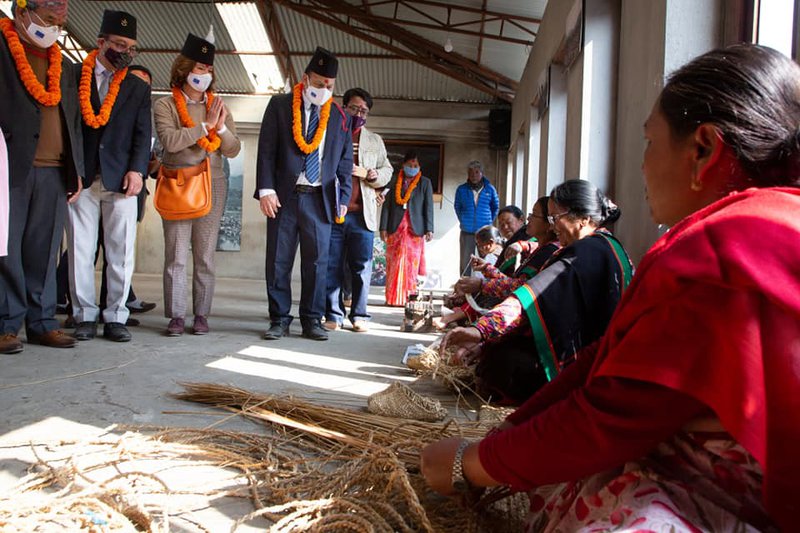 “LMC and local community are very grateful to European Union for its support and UN-Habitat and other NGOs for their contribution to restoring the cities in the old style,” said Mayor of LMC Chiribabu Maharjan.

Had the UN-Habitat not sought solutions through sustainable tourism, Bungamati would also not have revived as it is today. UN-Habitat launched the project with the main objective of reducing poverty by building the economy people contributing to mitigating climate change, and promoting sustainable development through technical assistance, policy support and pilot demonstration.

Community mobilization, heritage conservation and livelihood enhancement are three pillars of the project. These are key factors for the revival of Bungamati as well. During the visit of ambassador Deprez, local people have shown how their tradition and culture can lure tourists in the future thanks to the support of the European Union.

Tourism has benefited greatly from the use of social media. Because youth are active on social media, content about Bungamati could attract more youth visitors.

People have a connoisseur within them. They immediately draw their attention to everything that piques their curiosity. When it comes to youth, they like traveling, doing new things, and acquiring as much experience as possible in a short amount of time. New, gorgeous, and adventurous destinations excite today's youth. They search for intriguing details, large and tiny, and, most importantly, they seek out new experiences, adventure, and taking chances. Whether it is going on a trip, eating with friends, seeing a movie, or simply hanging out, adolescents find ways to have fun.

Bungamati is an ancient Newar settlement in the Lalitpur Metropolitan City in the Lalitpur District. This settlement has numerous religious and cultural sites such as Machhindranath temple, Hyanbribh Bhairav, Karyabinayak temple, Manakamana temple and Prathampur Mahavihar. It is one of the sacred places for thousands of Hindu and Buddhist followers. One can see the involvement of youth during the procession of various Jatras and festivals like Machhindranath Jatra, Bhairav Jatra, hanuman Jatra, and Karya Binayak Jatra and so on.

Bungamati has a long and illustrious history. All festivals are rooted in folktales that have been passed down from generation to generation. These festivals are fun to attend and are a great alternative to looking at a screen for the entire day. The god Machhindranath is also known as the patron of Kathmandu Valley. Month-long chariot pulling festival of Machhindranath is an homage to the rain god and youth of all backgrounds participate in this festival.

Local delicacies often tell a lot about the place itself. Bungamati has many places where visitors can try out authentic Newari food. Bungamati offers it all, from well-furnished restaurants to tiny eateries. Bungamati is the finest place to experience what a Newar community feels like. In addition to the cuisine, youth from every community will get an opportunity to learn about culture, and arts and meet people from the Newar community. Also, youth from the Newar community will get a chance to be connected to their roots since it’s no surprise that modernization has disconnected them from their roots.

Bungamati has gone a long way since the 2015 earthquake that struck Bungamati very badly, causing many lives and livelihoods of people to suffer. It is estimated that the earthquake destroyed about 54% of the houses completely while 35% were partially damaged, leaving only 11% undamaged. It is believed that almost 83% of houses were built 100 years ago and 17% were built 50 years ago. Unfortunately, those houses carrying historical and cultural values were badly impacted by the earthquake. Efforts for rehabilitation were initiated but they did not continue to yield meaningful results due to several concerns such as financial and land ownership issues.

European Union’s SWITCH-Asia funded Sustainable Tourism and Green Growth for Heritage Settlement of Kathmandu Valley (Parya Sampada) project, implemented by UN-Habitat aims to promote sustainable tourism and green growth in the Kathmandu Valley. The project has been supporting reconstruction activities and improving the livelihoods of people in Bungamati. The project is also supporting the preparation of various policy documents for Lalitpur Metropolitan City such as the Green Development Policy, Sustainable Tourism Development Policy, and Heritage Settlement Recovery Policy. 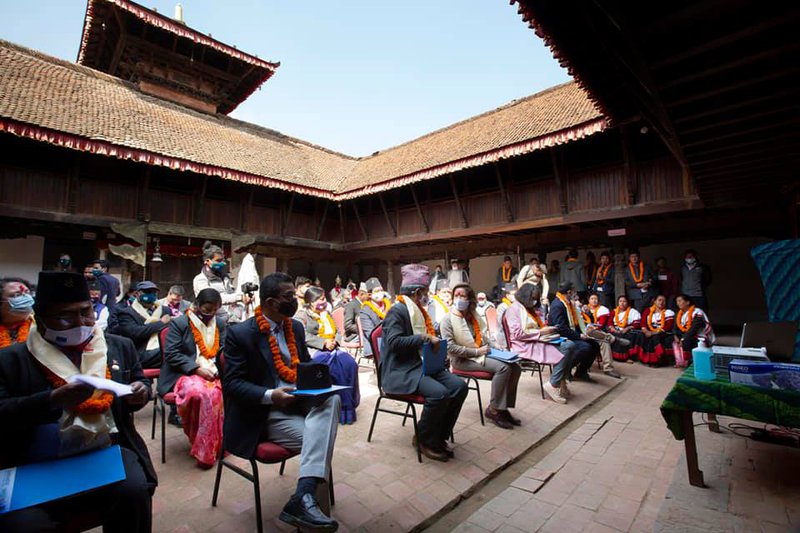 As youth and women are key beneficiaries of the project, the project has trained 448 youth and 495 women in entrepreneurship development. Similarly, 311 youth and 332 women have been trained in a variety of sectors such as hospitality, handicraft, and cuisine. These activities contribute to youth and women becoming independent at the same time supporting the Government of Nepal to achieve SDG No. 8- decent work and economic growth.

Twenty-five years old Sonam Tamang nowadays conducts the city tour as a guide in Bungamati. Although Tamang was born in Dhading, he grew up in Bungamati with a passion for art and craftsmanship. Tamang, who worked as a porter, is now living as a tour guide. He learned the basic concepts of the job as a guide and knows how to integrate information about ancient cultures, history, culture, art and drawing historical structures from the Newar community.

The partnership with local communities to re-build and revive the tourism activity while preserving their traditional values and culture is an exemplary initiative and might just be another reason to visit Bungamati in addition to tasting the authentic food and experiencing culture and traditions. It is unrivaled in terms of appearance and aesthetics as well. This settlement has all to draw folks in because there aren't many automobiles or people to disturb the serenity; therefore the setting is very peaceful.

Internal tourism has been moving at a high pace these days and the potential to promote it is endless. Visiting Bungamati provides two main messages. The first one is the local culture and the second is how Bungamati was able to revive its economy in the aftermath of the earthquake (reconstruction activities) and the COVID-19 outbreak. Internal tourism not only contributes to reviving the economy, but it also provides various opportunities to the youth of Bungamati. If we examine closely, there are clear linkages between youth, culture, and tourism, hence the youth have a bigger role to play to promote internal tourism and become a part of the local culture, and the economy of the country.

SABAH Nepal, an active partner of the Parya Sampada project funded by the European Union Switch Asia Program conducted a 5-day training from August 17 – 21, 2021 in collaboration with the Tourist Guide Association of Nepal (TURGAN) and relevant local governments. About 22 youth with 70% of girls participated in this initiative.

Ward Chairperson of LMC Ward 22 Bungamati Ambir Shakya said local government is always available for any kind of support for youth taking up a career as a local guide. He added that the local government will provide ID cards to local guides as recognition.