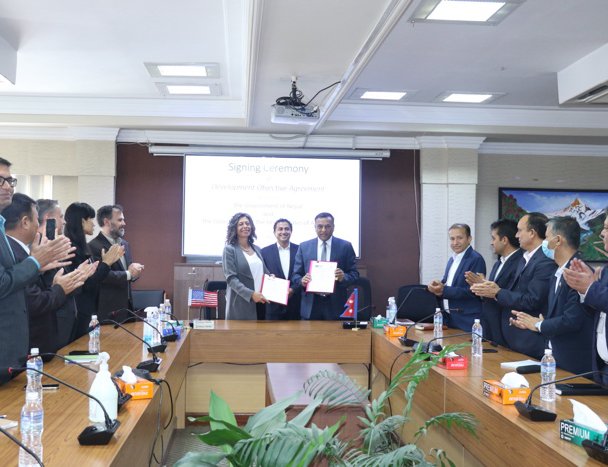 The Government of Nepal (GON), through the Ministry of Finance (MOF), and the United States, through the U.S. Agency for International Development (USAID), signed a new Development Objective Agreement.

This assistance agreement, which will span five years, outlines the broad development areas of U.S. and Nepal cooperation and collaboration. The grant, amounting to $659 million (equivalent to NRs 79.71 billion) over the five-year period, will support Nepal’s goal of graduating to a middle-income country.

The amount of assistance will be recorded in the GON Red Book and transparently implemented through both on and off treasury modalities. USAID will develop projects under this assistance agreement in collaboration with line ministries and implemented in accordance with GON rules and regulations.

Delivering a short remark following the signing ceremony, Mr. Aryal, expressed, “In 1951, after signing the Point Four program, the United States became the first bilateral donor to Nepal. This began a 70 plus year relationship of trust, mutual respect, and commitment to the people of Nepal.” He further added that Nepal has greatly benefited from the financial and technical assistance extended by the United States to help drive Nepal’s socioeconomic development. He expressed that the Assistance Agreement as a departure agreement for both governments due to the fact that, for the first time in this enduring partnership, U.S. assistance will be fully reflected in GON’s Red Book.

Similarly, Keyvanshad noted, “Today we add a new chapter to our long-standing partnership with the Government of Nepal and the Nepali people. We look forward to continuing the U.S. government’s long-term commitment to support activities that strengthen Nepal’s democracy, governance, and economic growth across the country.”

SEE’s Exam Routine Published, Starting From March 31 To April 12 By Agencies 50 minutes ago

International Flights Resume At TIA By Agencies 12 hours, 49 minutes ago

One Died And Scores Of Building Damage In The Bajura Earthquake By Agencies 4 days, 1 hour ago