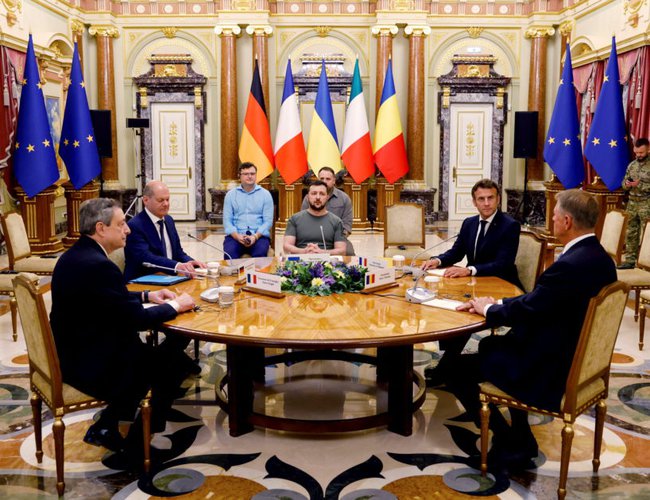 The leaders of Europe's biggest economies have gone to Ukraine's capital to show their support. In the face of Russia's intensifying attacks, they conveyed a clear message that they will back Kyiv's bid to join the European Union.

French President Emmanuel Macron said, "We have jointly expressed our desire to confirm through actions, beyond words, that Ukraine belongs to the European family."

German Chancellor Olaf Scholz said, "At the European Council, I will push for a unified position. Germany is in favor of a positive decision, in favor of Ukraine."

EU executives will discuss Ukraine's bid on Friday, although the process could take years.

Ukrainian officials welcomed the show of support. But they have complained that they've only received a fraction of the arms they need.

Ukrainian President Volodymyr Zelenskyy said the more powerful weapons they get, the faster they can liberate their people.

The European leaders also visited Irpin, a city that saw heavy fighting in the first weeks of the invasion.

Scholz says it has become a "symbol of unimaginable cruelty."

But the leaders have seen much of the fighting shift to the east.

Russian forces are trying to storm Severodonetksk from several directions. They have destroyed the main bridges over a river. But the mayor says the city is not totally cut off.

Russian Forces Hoping To Build On Gains In Eastern Ukraine By Agencies 8 hours, 28 minutes ago