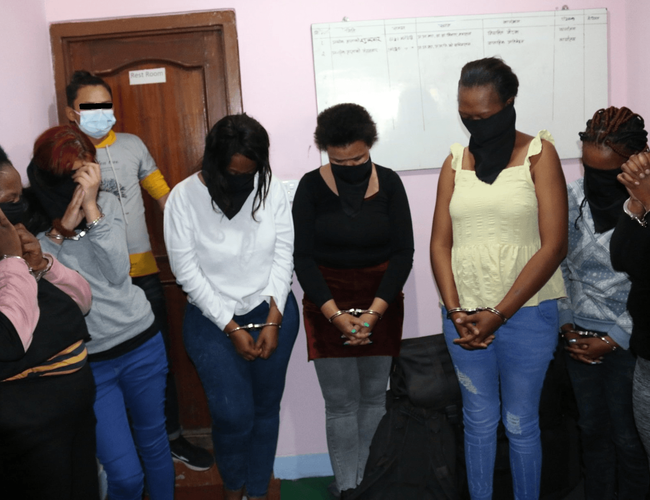 “It is the biggest seizure of heroin in the history of NCB. The 51 kg of seized heroin is worth Rs. 1.02 billion,” said Superintendent of Police (SP) Jeevan Kumar Shrestha.

Making the arrested individuals public amid a press conference organised at the NCB on Thursday, the bureau informed that the seven individuals had arrived in Nepal from South Africa via Tribhuvan International Airport (TIA).

“Foreigners arriving from South Africa have been arrested with drugs earlier as well. We have been conducting criminal profiling to identify possible smugglers arriving from abroad. The seven women were arrested on the same basis,” SP Shrestha said.

SP Shrestha, who is also the acting NCB chief, informed that the five women were arrested on June 13 and two others on June 14 from different hotels of Kathmandu.

Sibisi and Muriel had landed in Nepal at 5:55 pm on June 12 via Fly Dubai through a transit at Dubai. They were arrested with eight kg of heroin each from hotels in Thamel, Kathmandu.

Moroesi had arrived in Nepal via Qatar Airlines through a transit in Doha on June 14 at 10:15 am. She was arrested from a hotel in Thamel at around 1 pm with six kg of heroin.

Meanwhile, Marlese had arrived at 6 pm via Fly Dubai through a transit in Dubai. She was also arrested from a Thamel-based hotel with six kg of heroin at around 8:15 pm.

“All seven women came from the same country but were used as carriers by different groups. Only Sibisi, Muriel and Rosinah were operated by the same group. We have also identified their operators in South Africa,” said SP Shrestha.

The individuals had arrived under Visit Visa and had return tickets within some days. They came and were leaving separately.

The NCB informed that the women had hidden the drugs at a false bottom in their suitcases. “The drugs were not removed by the women after they reached their hotels. They were rather touring the city. The heavy quantity shows that Nepal was not the final destination but rather a transit,” said SP Shrestha.

Officials argue that the drugs might have been en-route to India where the demand for heroin is said to be high.

On April 16, a Zambian woman, who also came from South Africa, was arrested from the TIA with seven kg of heroin.

When police used her as a bait, they arrested an Indian woman who had come to receive the drugs and transport it to India.

12 Killed And 26 Injured In Bus Accident In Ramechhap By Agencies 2 hours, 50 minutes ago

All 14 Persons Killed In Jeep Accident In Waling Identified By NEW SPOTLIGHT ONLINE 1 month, 3 weeks ago