US, China Agree To Continue Dialogue, Despite Differences

US, China Agree To Continue Dialogue, Despite Differences 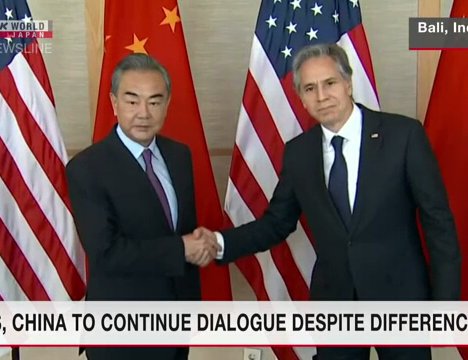 The top diplomats of the United States and China have agreed to continue dialogue to prevent competition between their countries from developing into conflict. But they remain at odds over Taiwan and other issues.

US Secretary of State Antony Blinken and Chinese Foreign Minister Wang Yi spoke on the Indonesian resort island of Bali on Saturday for over five hours. It was their first face-to-face meeting since the Russian invasion of Ukraine began in February. They last got together in October.

Blinken said in a news conference after the meeting that the discussions had been "useful, candid and constructive." He said they shared a commitment to manage the relationship and the competition between their countries responsibly, as expected by the international community.

The Chinese foreign ministry quoted Wang as saying it was important to properly manage contradictions and differences, and make efforts to resolve differences.

Blinken expressed deep concern over China's provocative rhetoric on Taiwan, stressing the importance of maintaining peace and stability across the Taiwan Strait.

Wang reportedly responded that the US should respect China's sovereignty and territorial integrity, and stop interfering in its internal affairs.

Blinken said he told Wang the US was concerned about China's alignment with Russia. He said China had "amplified Russian propaganda."

Blinken said he also raised human rights concerns about ethnic minorities in Tibet and the Xinjiang Uygur Autonomous Region, and about Hong Kong.

Despite remaining at odds over many issues, including security and economic matters, the US and China have recently been trying to promote dialogue in various fields.

The defense chiefs of the two countries met in person last month. Earlier this month, the ministers in charge of the economy held talks online.

Russians Advance On Bakhmut As Allies Mull Jets For Ukraine By Agencies 14 hours, 49 minutes ago