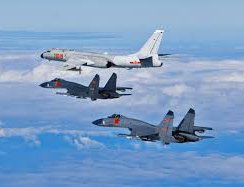 The Chinese military continued its large-scale exercises around Taiwan on Saturday.

Concerns are growing that China may increase its military pressure on Taiwan, even after it completes the current drills around the island.

Chinese military's Eastern Theater Command, which is in charge of the East China Sea, announced on Saturday that it conducted combat exercises around Taiwan that simulated attacks on targets on land and at sea.

State-run China Central Television reported on drills carried out by naval vessels, using a video showing what appeared to be Taiwanese territory, in an attempt to highlight that the exercises are taking place near the island.

Taiwan's defense ministry said on Saturday that it had confirmed Chinese military planes and ships were operating in and around the Taiwan Strait, with some crossing the median line.

The ministry noted that the Chinese military set up no-entry zones around Taiwan Strait for its exercises to prevent aircraft and vessels from entering the areas. It denounced the move as a unilateral attempt to change the status quo.

People in Taiwan are concerned that China's military activities across the median line in the Taiwan Strait will become routine in an effort to increase pressure on the island's leaders.