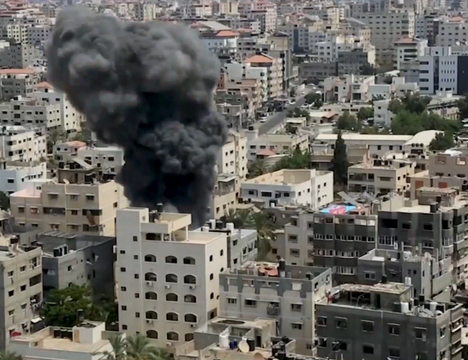 Israel and a Palestinian militant group have agreed to a ceasefire after dozens of people were killed in exchanges of armed attacks since Friday.

The Egyptian-mediated ceasefire between Israel and the Gaza-based Islamic Jihad group took effect at 11:30 p.m. on Sunday.

Palestinian Islamic Jihad's leader Ziad al-Nakhaleh had a series of meetings last week and a picture was released on Saturday of him with Islamic Revolutionary Guard Corps head Hossein Salami.

The pictures coming out of Tehran the last few days went a long way toward explaining events in the South of Israel.

Here was Palestinian Islamic Jihad’s leader Ziyad al-Nakhalah’s meeting on Wednesday with Iranian Foreign Minister Hossein Amirabollahian. On Thursday, it was Nakhalah meeting with Iranian President Ebrahim Raisi. And then on Saturday, after the beginning of Operation Breaking Dawn, a picture was released of him in a tête-à-tête with Islamic Revolutionary Guard Corps (IRGC) head Hossein Salami.

Under Nakhalah’s leadership, Islamic Jihad – whose founder Fathi Shikaki took his inspiration for establishing the organization in 1981 from Ayatollah Ruhollah Khomeini and the 1979 Iranian Revolution – has turned into a fully owned and operated subsidiary of Iran.

While Iran and Islamic Jihad had a brief falling out in 2015-2016 over the Saudi campaign against the Houthis in Yemen, today Islamic Jihad is to Iran in Gaza what Hezbollah is to the Islamic Republic in Lebanon, and the Houthis are to the Iranians in Yemen.

ran supports Hamas but it controls Islamic Jihad. There is a difference. To understand the latter terrorist group’s behavior over the past week, it is important to understand Iran’s interests. One need not be a brilliant Mideast strategist to understand them: cause Israel as much hurt as possible.

“We are with you on this path until the end – and let Palestine and the Palestinians know that they are not alone,” Salami told Nakhalah during a meeting in Tehran.

Salami said Islamic Jihad’s actions have ushered in a “new era,” that Israel “will pay a heavy price once again for the recent crime,” and that “Palestinian resistance groups” today have “the ability to manage major wars.”

Be that as it may, after three days of Operation Breaking Dawn, Israel can point to several significant achievements in this “minor war.”

First, it surprised Islamic Jihad on Friday with its pinpoint strike on the safe house in Gaza City of its Northern Command head Tayseer al-Jabari, as well as the killing at the same time of Abdullah Kadoum, head of the group‘s anti-tank guided-missile section. It scored another success late Saturday night by killing Khaled Mansour, the group’s Southern Command chief. Those actions highlighted both Israel’s technical and intelligence capabilities.

Israel also sent an unequivocal message to Islamic Jihad, and all others watching, that it will continue to fight terrorism originating in the West Bank by going on the offensive, by taking the battle to the enemy, and by not waiting until a terrorist attack “succeeds” before going after terrorists and terror supporters throughout the volatile region.

Jerusalem will not be deterred from acting in Judea and Samaria by an Iranian-backed terrorist group issuing threats from Gaza. Israel sent a strong message that Islamic Jihad’s attempts to establish new rules – to set a new equation whereby any IDF action in the West Bank would lead to an automatic response or the threat of one, that in and of itself could paralyze the South – would not be tolerated.

But Jerusalem was surprised as well.

It was surprised by the intelligence information regarding Islamic Jihad’s intent after the arrest last week of Bassam Saadi in Jenin to fire anti-tank missiles at Israeli targets near the Gaza border. The conventional wisdom, based on experience, was that Islamic Jihad would issue some threats, maybe even fire some rockets toward Israel that would either be intercepted or land harmlessly in fields, but then – after a few hours – life would return to normal.

That didn’t happen this time.

Israel had hoped it would, and it was not alone. Even Hamas had hoped life would return to normal since a significant conflagration at this time does not serve its purpose of trying to reconstruct Gaza with Egyptian and Qatari help. Hamas also benefits from some 14,000 workers who have received permits to work in Israel – permits temporarily rescinded last week.

Hamas, not Islamic Jihad, has overall authority for the life of the citizens in Gaza. It wants to be the one to decide when to launch a campaign against Israel. It does not want its hand forced by an organization that lacks the day-to-day responsibility for the citizens of Gaza, and whose considerations are not necessarily in sync with its own.

Islamic Jihad did not respond as expected because it was not in Iran’s interest for it to do so. Tehran has an interest in keeping the situation in the South at a fever pitch; it has no interest in calming the situation. And the considerations foremost in the mind of the jihadist group’s leaders are what suits the Islamic Republic, to whom it is tied ideologically and financially. Last year, Nakhalah said Islamic Jihad took “direct orders” from the IRGC and that Iran delivered missiles to the Gaza Strip that were used to attack Tel Aviv.

After its initial successes against Islamic Jihad on Friday and Saturday, Israel’s interest was to end the fighting sooner rather than later. The longer the fighting would continue, the greater the likelihood of something going wrong that would fundamentally change the picture – such as an errant Israeli rocket that would kill Palestinian civilians – and lead to pressure on Hamas to join the fray.

Iran, on the other hand, would like to see the fighting continue. If it doesn’t continue, then that is a sign of the sway of other actors in the region able to convince Islamic Jihad that to continue firing rockets now would be inimical to their interests.