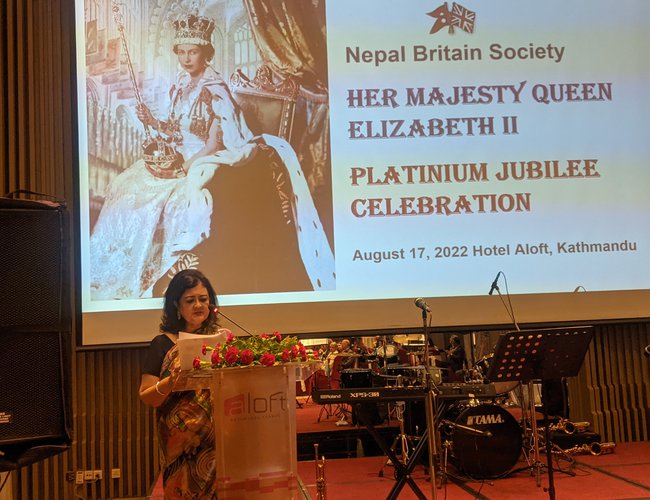 I would like to especially welcome Her Excellency Nicola Pollitt, the British Ambassador who is the honorary trustee of our society. In 2024, we will be celebrating 60 years of the Nepal Britain Society, a landmark celebration for one of the oldest friendship society in Nepal.

In 2016, Nepal Britain Society celebrated 200 years of bilateral relations between our two countries with many activities such as a musical program, a Shakespeare Drama, ‘ A Mild Sumer Night’s Dream at the British School, charitable programs, a book launch, art exhibition and various other functions.

We would also like to thank the United Kingdom for her friendship, support, and cooperation in the past years and all the efforts in the development field. The United Kingdom is one of the greatest financial aid providers, has shown trusted friendship and goodwill to Nepal at all times. As the president of the society and half of the Nepalese people gathered here, we would like to thank the British government for their continuing support. The British Government has also generously supported our heritage conservation activities in Nepal. The late H.E. Richard Morris and I, along with Rohit Ranjitkar of the KVPT, were privilege to welcome and show HRH Prince Harry, Due of Sussex, the newly restored Vishweshshwor Temple, and the Patan Durbar Square which he enjoyed touring in March 2016 because the British Government gave funds for Heritage restoration due to 2015 earthquake.

Our society members are mostly people who have studied, worked and lived in the UK. They have gone to the finest schools and universities and have returned to make a difference by virtue of their British education to make a difference and help in the development of Nepal

Over the years, the society has supported the theatre, arts and many other philanthropic causes. I would like to stress that the Nepal Britain Society is a voluntary organization and its executive members and life members have given time to make our society a well-established cultural and philanthropic organizations.

During Covid-19, our society could not meet as office as we would have liked to. However, we did manage to organize several interesting events. Her Excellency was the chief guest for Neera Joshi’s botanical exhibition supported by the Nepal Britain Society at the Siddhartha Art Gallery, and then we manage to stage a great play by Shakespeare- As You Like It in the midst of Covid, and theatre lovers cam and supported the play with double masks and sat throughout play for two hours without a break which was bit suffocating but also very enjoyable. This was in honor of the Her Majesty’s Platinum Jubilee.

I especially want to thank Mrs. Greta Rana, other board members and the persons behind all the plays and comedies that we have hosted throughout the last 20 years. Her energy, directions, and vision made it possible for our own new Shakespeare Wallahs and other budding actors to stage numerous serious plays and comedies to bring much laugher and light to the theater lovers in Kathmandu. These plays took place mostly in the Sterling Club in the British Embassy, in hotels, the British School and nowadays in the many local theatre halls in Kathmandu which are committed to elevating the level of theatre in Nepal.

In 2015, we were very privileged to see Hamlet performed by the Globe Theater, London which toured 145 countries. It was staged in the city of Bhaktapur in collaboration with the British Council. It was a magical evening and it was a treat of a lifetime for many of us.

Our other past activities’ will be highlighted in the video presentation by Sanjiv and Kapil and we plan a few more programs again soon but Covid seems always to lurking scaring us all.

The Nepal Britain Society and Nepal would also like to congratulate England’s football team, the Lionesses, for winning the European Cup and also for the successful commonwealth Games that took place in Birmingham in the UK.

Once against tonight, we are here to celebrate the Platinum Jubilee of Her Majesty Queen Elizabeth II to mark the 70th Anniversary of the occasion of Her Majesty’s accession to the throne on February 6th 1952.

Her Majesty Queen Elizabeth II has been an inspiration and a guiding light to the UK, Commonwealth and the whole world. She was voted the most influential persons in the world this year and she has led her life with wisdom, courage, dignity, compassions and by setting a world of complicated geo-politics across the nations. The world has nothing but deep admiration for her as she celebrated her 96th Birthday, in April.

We also mourn the passing of His Royal Highness the late Prince Philip who was also patron of the Nepal Britain Society and had vested Nepal many times. Some of us were privileged to meet him in the British Embassy as he was to open the Sterling Club.

Today many of our members not here due to Covid-19 and some are elderly and felt sifter to be at home. They have sent their best wishes for this dinner. Before, I conclude, I would like to thank Her Excellency Nicola Pollitt for joining us this evening as our Trustee and our members, each one of you for joining in to celebrate the Platinum Jubilee of Queen Elizabeth II and to celebrate the 206-year relationship between Britain and Nepal. I would also like to thank each one of you of being here tonight and for your love, help and support to the Nepal Britain Society. Without your membership and interest, the society would not be able to function and special thanks to Kapil Lohani and Sanjeev Pandey for always helping society with great enthusiasm.

pande is the President of Nepal Britain Society