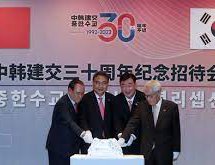 Ceremonies were held in Beijing and Seoul on Wednesday to mark the 30th anniversary. On August 24, 1992, the foreign ministers of China and South Korea signed a joint statement on establishing diplomatic ties.

At the ceremonies, messages from the leaders of the countries were read out by their foreign ministers.

Chinese President Xi Jinping called for building a substantive friendship with the 30th anniversary as the new starting point.

South Korean President Yoon Suk-yeol expressed hope for tangible results for the people of the two countries in areas such as economic security and climate change.

He also expressed hope to hold a summit meeting with Xi.

Since the two countries established diplomatic ties, trade between them has increased by nearly 50 times, with China becoming South Korea's largest trading partner.

The Yoon administration, which aims to further strengthen the alliance with the United States, is moving to push ahead with the deployment of the US THAAD missile defense system in South Korea.

The Chinese side has warned against the move, saying that the previous administration of President Moon Jae-in promised to limit the operation of the system.