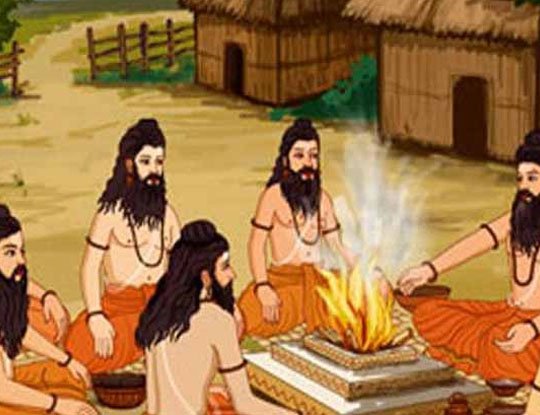 This year’s Rishi Panchami is on September 1. Rishi Panchami has its own importance in Hinduism. Rishi Panchami is celebrated as a festival in Hinduism. The festival of Rishipanchami is celebrated on the fifth day of Shukla Paksha in the month of Bhadrapada of the Hindu calendar. This festival takes place on the next day of Ganesh Chaturthi. This is the traditional worship of the Sapta Rishi, on this day reverence is expressed towards the Sapta Rishis. In this fast, people express their respect, gratitude and remembrance of the great deeds of those ancient sages who dedicated their lives for the welfare of the society.

The seven sages - Kashyapa, Atri, Bharadwaja, Vishwamitra, Gautam Maharishi, Jamadagni and Vashishtha. In some parts of Kerala, this day is also celebrated as Vishwakarma Puja.

By observing a fast on the day of Rishi Panchami, one gets freedom from sins committed knowingly or unknowingly. Taking a bath in the Ganges on this day also has significance.

Knowing this fast, both men and women should do it to cleanse the sins committed inadvertently. The fasting person should bathe in the Ganges River or any other river or pond. If this is not possible, then you should take a bath by mixing Ganga water in bathing water at home. Thereafter, after making an urn filled with mud or copper water, after leaving the cow dung, make Ashtadal Kamal. Listen to the story by worshiping Sapta Rishis including Arundhati and having food to the Brahmin and eat it yourself.

In the Vidarbha country there lived a virtuous Brahmin named Uttanka. His wife was a great husband, whose name was Susheela. The Brahmin had two children, a son and a daughter. When he was eligible for marriage, he married the girl with the same Kulshil groom. A few days later she became a widow by chance. The unhappy Brahmin couple started living as a hut on the Ganges along with the girl.

One day a Brahmin girl was sleeping that her body was filled with insects. Girl told the whole thing to her mother. Mother asked her husband to say everything - Prannath! What is the reason of this situation of my sadhvi daughter?

Uttanka discovered this incident by Samadhi and told him that this girl was a Brahmani even in her previous birth. She used to touch the utensils even when she was menstruating. Therefore, there are insects in its body.

It is believed by the scriptures that the woman of menstruation is impure like Chandalini on the first day, Brahmaghatini on the second day and Dhobin on the third day. She is purified by bathing on the fourth day. If even with this pure heart, then observe the fast of Rishi Panchami, then all its sorrows will go away and in the next life, you will get unalterable good fortune.

On the orders of the father, the daughter methodically worshiped and worshiped the sage Panchami. She got free from all sorrows due to the effect of the fast. In the next life, he got the enjoyment of inexhaustible pleasures including unalterable good fortune.

On Rishi Panchami, a traditional Hindu festival and a public holiday in Nepal, all women and those girls who have had their first period take part, seeking forgiveness for any errors committed during their periods.

In Hinduism, women are considered ceremonially unclean during menstruation, and they are not supposed to touch others, cook food, or perform religious rituals till their period is over.

Rishi Panchami occurs on the fifth day of the Hindu month of Bhadrapad, which means it falls somewhere during August or September on the Gregorian Calendar.

On Rishi Panchami, women take a ritual bath in holy water, be it in a river, pond, or other body of water. They bathe before the rising of the sun, apply special types of mud to their body, use datiwan herb as a toothbrush, offer datiwan leaves to the gods, and fast during the day. They may also wash their husband’s feet and take part in various other religious rituals.

On this day, there are many Hindu gods that are given special worship. These include the Sapta Rishi, meaning “seven sages”, who are thought to inhabit the Great Bear Constellation. Images of these seven, and of other, gods may be crafted out of cow dung and then worshiped on Rishi Panchami.

The names of Saptarshi for the current Manvantara are Atri, Bharadvaja, Gautama, Jamadagni, Kashyapa, Vashishta, and Vishvamitra.

Bharadvaja is a revered Vedic sage (maharishi) from Ancient India. He is the son of Devaguru Brihaspati. He is a renowned scholar, economist, grammarian, and physician. His contributions to ancient Indian literature, specifically the Rig Veda, provide significant insight into ancient Indian society. He and his family of students are the authors of the sixth book of the Rigveda. In the epic Mahabharata, Bharadwaja is the father of the Droṇacharya, the instructor to Pandavas and Kaurava princes. Bharadwaja is also mentioned in Charaka Samhita, an authoritative ancient Indian medical text.

During their exile, Lord Rama and others rested in Bharadwaja’s ashrama when they were crossing Prayag and accepted his offerings.

Sage Jamadagni was the father of Lord Parashurama, who is one of the incarnations of Lord Vishnu. He was the descendants of Sage Bhrighu, who had dared to kick Lord Vishnu. Like his ancestor, he was also known for his angry nature.

Once his wife, Renuka, was late to bring water for a ritual. With his divine powers, he understood that she was watching Gandharvas and Apsaras sporting in the water, and the thoughts of luxurious life rose in her mind. Therefore, he ordered his son to kill her. Upon the request of his son, he brought her back to life.

He had a divine cow named Kamadhenu at his hermitage, which King Sahastrarjuna wanted to take away by force. But Sage Jamadagni opposed him. Therefore, while he was meditating, Sahastrarjuna killed him. After knowing about this incident, Lord Parashurama became angry and killed 21 generations of Kshatriya over time3

Sage Kashyapa is the father of gods and Asuras. Kashyapa is credited with composing a few hymns in the Rigveda, mainly in Mandala IX. He and his family of students are mainly composers of hymns for Soma Pavamāna (“self-purifying Soma”), which represents a single moment in the Soma sacrifice. Per some scholars, the name Kashmir could have been a shortened form of “Kashyapa Mira”, or the “lake of the sage Kashyapa”. Alternatively, it may come from a Kashmiri or Sanskrit term that means “to dry up water”. It could also have been derived from the term “Kashyapa Meru”, which means the sacred mountains of Kashyapa

Sage Vashishtha was the guru of Lord Rama. He is a mind-born son of Lord Brahma. He is credited as the chief author of Mandala 7 of the Rigveda. The Yoga Vasishtha, Vasishtha Samhita, as well as some versions of the Agni Purana and Vishnu Purana are attributed to him.

He is the husband of Arundahit and therefore is called Arundhati Natha. He suffered a lot because of his feud with Sage Vishwamitra

Sage Vishwamitra was born as a Kshatriya but later became a Brahmin and one of the greatest sages of ancient India. He is so powerful that he was about to create Pratisrushti (a replica of the world). He is credited with the creation of the Gayatri Mantra, which is one of the most popular Hindu mantras.

Sage Vishwamitra is also credited as the author of most of Mandala 3 of the Rigveda, Due to some reasons, he became an enemy of Sage Vashishtha. His real name was Kaushika. He also tested the honesty of King Harishachandra by making him undergo severe mental and physical torture.