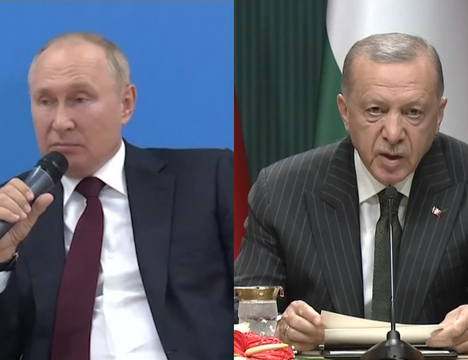 The Turkish presidential office says Recep Tayyip Erdogan spoke with his Russian counterpart Vladimir Putin by phone and said his country is willing to mediate the standoff at the Ukraine's Zaporizhzhia nuclear plant.

The presidential office released a statement after the two leaders talked on Saturday. It said the Turkish president offered to take on the role of facilitator, as he did for the Ukrainian grain deal.

The Russian presidential office said the two leaders agreed to strengthen bilateral cooperation in sectors such as energy and economy.

It also said Erdogan expressed condolences on the death of the last Soviet leader, Mikhail Gorbachev, whose funeral was held on Saturday.

The International Atomic Energy Agency says it plans to keep experts on hand as a permanent presence at the Zaporizhzhia nuclear plant. The facility is controlled by the Russian military.

IAEA Director-General Rafael Grossi made the announcement in a press conference in Vienna after returning from a visit to the plant.

He said he left six inspectors behind to assess the damage. He says two of them will provide a "permanent presence."

Ukraine's state nuclear power company said the IAEA would struggle to make an "impartial assessment." It said the team wasn't allowed to enter the crisis center, where Russian troops are stationed.

The effectiveness of any monitoring at the plant is in doubt, as fighting continues nearby.

Meanwhile, the new school year in Ukraine is underway.

In-person classes have resumed at some schools, which face numerous changes and challenges.

In the town of Bucha near Kyiv, many civilians were found dead early in the conflict. Children are feeling anxious and traumatized.

A doctor said, "an increasing number of children are suffering from stress. It's better keeping children away from such an environment to help them get better".

A member of pro-Russian group said, " Ukrainian leaders are trying to rewrite their history and teach it to the children".

There's been an official announcement that Russian soldiers will remove all books from school libraries on Ukraine's history and military. They'll distribute textbooks on Russian language and history instead.A school principal says he was told to offer Russian-style education, but has resisted.

In late August, Ukraine launched an offensive to take back Russian-controlled areas around Kherson.

Russians Advance On Bakhmut As Allies Mull Jets For Ukraine By Agencies 13 hours, 40 minutes ago