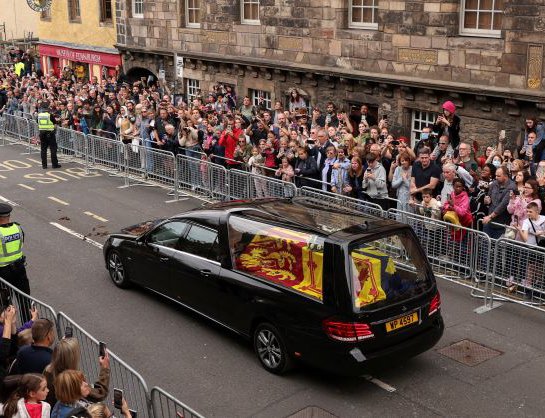 The hearse carrying the coffin of Britain's Queen Elizabeth II has arrived in the Scottish capital, Edinburgh.

The convoy left Balmoral Castle on Sunday, the Queen's summer home in Scotland, after she died there on Thursday at age 96.

Her coffin was draped in the Royal Standard of Scotland with a wreath of flowers, including her favorite, placed on top of the flag.

Mourners lined the route of the convoy to pay tribute to the Queen for her 70 years on the throne.

The Queen's procession reached the Palace of Holyroodhouse in Edinburgh later in the day. Soldiers in traditional ethnic kilts took her coffin into the palace, which was her home in Scotland.

The coffin will be moved on Monday, from Holyroodhouse to St Giles' Cathedral in the city. It will remain there for 24 hours to allow the public to pay tribute.

The coffin will then be flown to London on a Royal Air Force plane on Tuesday, before being transferred to Westminster Hall on the following day.

The Queen will lie in state for four days to allow the public to pay their last respects. Her state funeral will take place on September 19.