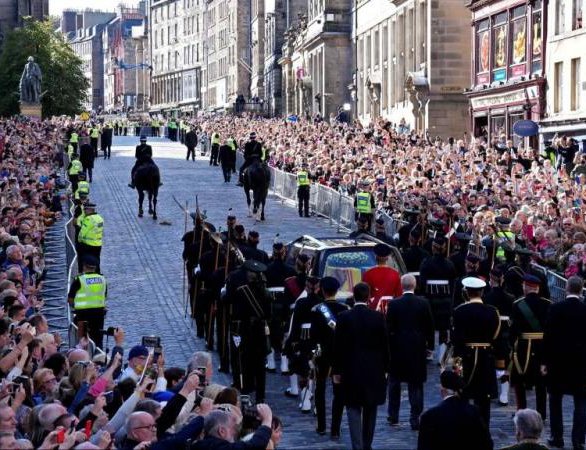 People in Scotland are divided in their support for the British monarchy. Still, thousands turned out on Monday to mourn Queen Elizabeth. They tried to catch a glimpse as her coffin began its journey from Balmoral Castle to her final resting place at Windsor Castle.

People lined the streets of Edinburgh as the cortege made its way up a thoroughfare known as the Royal Mile. King Charles, the Queen Consort Camilla, and other members of the Royal Family attended a service of thanksgiving at Saint Giles' Cathedral.

Members of the public streamed in after the ceremony to honor someone described as a "constant" in their lives.

The King then attended a session of the Scottish Parliament. Lawmakers promised to support him as he builds on what First Minister Nicola Sturgeon called the "extraordinary legacy" of his mother.

King Charles said the Queen, like so many generations in the Royal Family before her, found in Scotland and in the hearts of its people "a haven and a home."

People in London have been awaiting the arrival of the Queen's coffin, so they can pay their respects. Leaders from around the world will be among those who say goodbye to the Queen next Monday in a funeral at Westminster Abbey.

Russians Advance On Bakhmut As Allies Mull Jets For Ukraine By Agencies 13 hours, 55 minutes ago