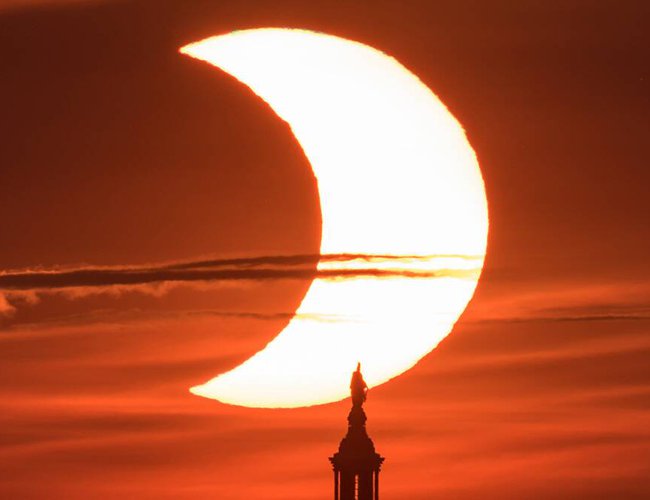 Large numbers of people gathered in different river banks including Debghat takes final dip at the rivers. As solar eclipse end at 17:23 PM, there is a rush of devotees to pray for the god.

Partial Eclipse begins in Kathmandu at 16:52:40 Tue, and ends at 17:23:07. Since the Sun is near the horizon at this time, scientist recommend going to a high point or finding an unobstructed area with free sight to West-southwest for the best view of the eclipse.

Solar Eclipse 2022 Time in India, Solar Eclipse in India 2022: The partial solar eclipse or Surya Grahan on October 25 marks the last solar eclipse of the year. The eclipse will be visible from parts of Europe, Northern Africa and large parts of western and central Asia. Most of India should be able to view the solar eclipse, apart from some parts in the Northeast.

According to astrologers, some temples remain closed during a solar eclipse or Surya Grahan because of “the amount of negative energy released” during it, which is.

Around 1200 BC, scribes in Anyang in China recorded eclipses on oxen’ shoulder blades and tortoise shells, called oxen bones, according to NASA. “The Sun has been eaten, says on of the eclipse records. In the 1980s and 1990s, astronomers at NASA’s Jet Propulsion Laboratory studied these records to research changes in our planet’s rotation.

The eclipses studied for this research occurred in 1226 BC, 1198 BC, 1172 BC, 1163 BC, and 1161 BC. If the Earth was rotating at the same speed it is now, these eclipses should have happened thousands of kilometres away from Anyang, according to NASA. Based on this, scientists concluded that the rotation of the Earth had slowed by 47-thousands of a second per day in the last 3,200 years.