Based on intensive research and review of literature, Padma Sunder Joshi in his book Hiti Pratha (stone spout system) elaborates on history, present and future 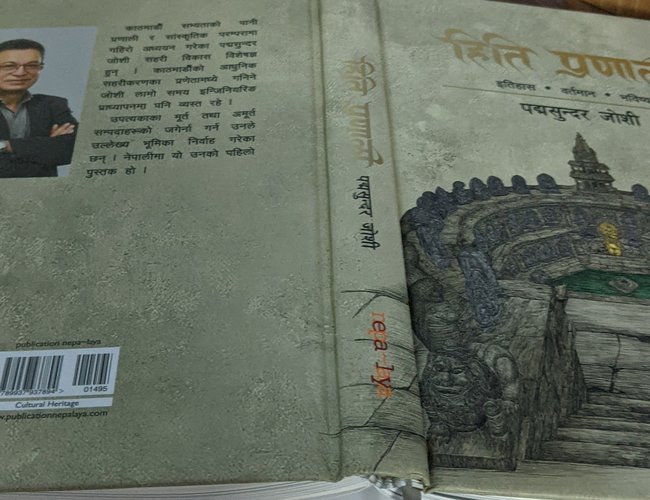 As it says, water is life and water is a civilization that is deeply linked with human society. Kathmandu Valley’s civilization also ushered along with the development of the water system and water culture.

Although many of the stone spout systems of Kathmandu valley is on the verge of disappearance with the haphazard urban growth, the remaining centuries-old stone spout water supply system still demonstrates their unique innovations and techniques of water supply in urban areas.

Incorporating all these sagas of the Valley’s stone spout water supply system, its religious, cultural and civilization linkages and its contribution to sustained human life by delivering water to drink and irrigation, Padma Sundar Joshi, an urban engineer has intensively worked in the valley to preserving the heritage and old settlement, has published a book in Nepali Hiti Pranali (stone spout system).

This is the first kind of book which includes social, cultural and religious importance and significance and folklore and tales about the water system portraying their sanctity.

Starting from the early civilization of Gopalbansh, Kirat, Licchivi, Thakuri, Mallas and Shahs, the valley’s Hiti Pranali has gone through several civilizations. However, it was Licchivi, and Thakuri who contributed immensely to the initial stage and Mallas gave artistic and creative faces.

In parallel, the stone spout system also evolved in the far western region including Dailkekh and Doti. However, the book is confined to only Kathmandu valley.

Joshi in his book also describes how haphazard and high growth of urbanization decaying these old systems disrupting the cultural and religious value system of the valley ultimately contributing to ruining the civilization.

Urbanization has also contributed to enriching cultural, religious and heritage sites and urban knowledge in the Kathmandu Valley and some of them are unique and indigenously developed like stone spouts. However, the recent decade's haphazard and rapid urbanization has destroyed the traditional stone spouts which have linked with the two-centuries-old civilization of the valley.

Author Joshi carefully traced all these important religious and cultural linkages of stone spouts with the life of the valley and their implications for the valley’s civilizations and livelihood.

He also describes the valley’s majestic and artistic stone spouts carved in the stone symbolizing the gods of water like fish, snakes and crocodiles. As he observed, each spout has the statue of lord Shiva at the top and Bhagirtha, a demon King who mediates difficult and hard meditation to woo Ganga, mother of water to come to earth.

From architectural importance to religion, culture and civilization, author Joshi elaborates in detail depicting the cycle of water in human life and the reason behind the fast decaying of the system and recent effort of revival.

Several books were written related to the architecture of Kathmandu, stone spouts, temples and unique patterns of urban development. No one has made any effort to focus on stone spouts, which serve as a lifeline for supplying water for drinking and irrigation for centuries.

Having worked closely for decades in Kathmandu’s urban development and heritage preservation, Joshi, an urban engineer himself, came out with a book about the saga of stone spouts of the valley.

The book is the result of the interesting and important movement taking place in Ikhachhe in Patan Lalitpur, The scarcity of drinking water in Kathmandu valley has shed the local population back to the traditional water system, the perennial sources which were built with the knowledge, skills and wisdom that started even before Christian era and took shape in the 15th century. It was later expanded and polished.

However, this water civilization was realized after water scarcity in the valley hits the people around 2000. Along with launching peaceful protests, the community has started to revive the system by preserving the sources.

As humans realized that they could not continue without water, each culture started developing “best practices” in the use of surface and groundwater. Kathmandu Valley was no exception in this regard. For the preservation of the stone spout, the people even linked the spouts with the religions with interesting folklore.

By constructing the stone spouts with different facets of gods and insects and animals related to water, the people in old ways tried to explain the importance of water and spout in life. Author Joshi explains all these.

In this way, the valley’s civilization created ancestral water culture, which is the result of millennia of observation of nature and climate cycles. Due to its fundamental role in the life of society, water has a very strong cultural dimension. Without understanding or considering the cultural aspects of human problems with water it will not be possible to find a sustainable solution.

The ancient history of mankind has been marked by all kinds of crises caused by the lack of water due to climate change. Many cultures were able to overcome them, while others were unable to adapt and declined. We have to learn from the cultures that resisted and those that succumbed.

When cities developed, water access needs to be increased with the cooking of food and emerging personal hygiene. When cities started growing, sanitation demanded the presence of water to a greater or lesser extent depending on the development of cesspits and sewage. Thus, each society established a relationship with water that was shaped by environmental resources, climate and the specific needs of each population center. The “water cultures” that formed the basis of civilizations were born.

Although water supply may be significantly affected in the future by climate change as a result of varying precipitation and increasing temperature), water demand may increase over time due to rapid urbanization. As author Joshi writes preservation of this traditional water supply system can help to reduce the impacts.

As already faced, rapid urbanization can intensify the imbalance between water supply and demand and lead to the higher likelihood of water shortage conditions in developed areas in the future. However, the proper management and preservation of traditional water spout systems can help.

Amidst the rising population and subsequent urban sprawl, Kathmandu valley has been facing a water crisis. Along with the over-extraction of surface water and low recharge, rapid urbanization is also destroying river basins in Kathmandu valley which hosts the drinking water supply to the capital city.

Author Joshi in his book, which was done through a combination of analysis of data, and collation of data on population growth, surface water distribution and groundwater system, describes the alarming situation and urged the need to protect the preserve the remaining water supply system.

As the book begins with the rebellion in Patan, this study has an imperative focus on the effects of rapidly growing urban life and its impact on water resources in the valley. This was accomplished by studying the land use, stone spouts, and their importance and groundwater trend for two decades followed by rampant land use and destroying the traditional sources.

In the context of global climate change, the water security of communities, regions and nations has come to top the agenda in an international forum. Globally, water use has been growing at more than twice the rate of population increase in the last century, and a larger number of regions are reaching the limit at which water services can no longer be sustainably delivered.

A study made by the Ministry of Water Supply calculated groundwater withdrawals and stated that it has more than a hundred percent since the 1960s due to growing demand but with no tendency to slow down.

This scenario in Kathmandu Valley thus calls for a forensic study together with a visualization of future trends. A reliable but robust way is a bottom-up approach in which a drainage basin-scale study has to be carried out to know the problems that may pop up due to water scarcity.

Joshi’s book is scholarly and highly valuable for the collection of all people. Written in Nepali language, author Joshi has made efforts to inform people about their own heritage and the significance of the system. 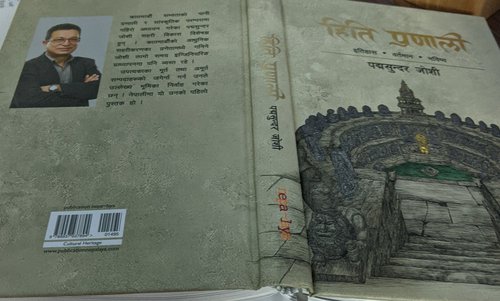