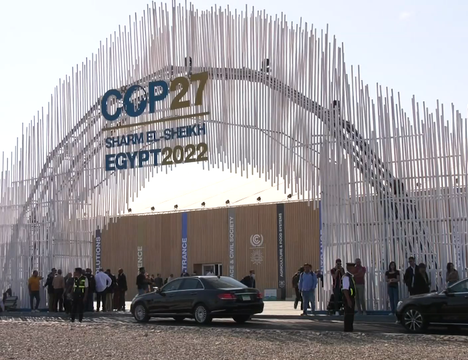 The latest round of UN climate talks, COP27, is due to open in Egypt with more than 190 countries and territories taking part.

The conference will open at 10:00 a.m. on Sunday in the Egyptian city of Sharm el-Sheikh.

Conference delegates are scheduled to discuss ways to accelerate plans to reduce greenhouse gas emissions by 2030, as well as financial and technological assistance to curb climate change damage.

During last year's meeting, delegates agreed that all participating parties would make collective efforts to keep rises in average worldwide temperatures to less than 1.5 degrees Celsius.

However, the UN Climate Change secretariat predicts a rise of about 2.5 degrees by the end of the 21st century, as long as participating parties retain their current reduction targets.

Concern over the impact of climate change has been growing as abnormal weather conditions have occurred around the globe, and the damage becomes more serious than before.

Pakistan was hit by large-scale floods earlier this year.

But the G20 ministerial meeting on the environment and climate change held in August failed to adopt a joint statement.

The failure was attributed to the antagonism between Russia and Western countries that had deepened since Russia's invasion of Ukraine.

COP27 will continue through November 18. A summit and ministerial meetings are also scheduled to be held during this round.