Having been involved in all level elections as a national observer from General Elections Observation Committee (GEOC) held since 1991, Krishna Man Pradhan, executive director of Nepal Law Society and General Secretary of the General Elections Observation Committee, is now making programs and strategy to observe the elections. He spoke to New Spotlight following disseminating the report on the Pre-Elections Environment of Federal And Provincial Level Elations prepared by GEOC. Excerpts of a brief interview just a day before November 4. 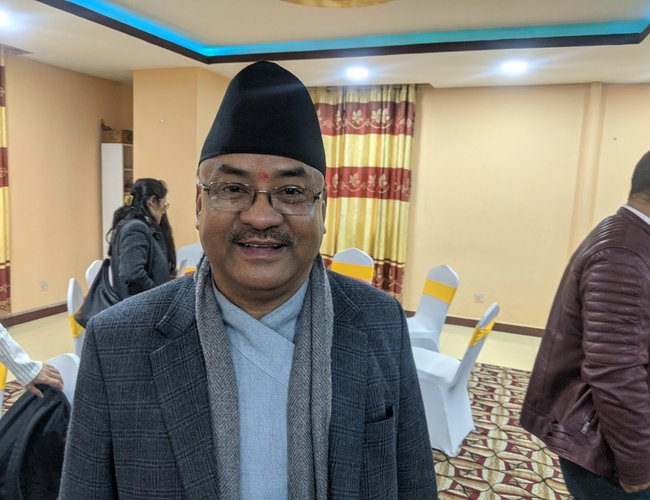 Accepting some sporadic incidents, we can say that the second elections of House of Representatives and Provincial Legislature called following the promulgation of the Constitution of Nepal in 2015 will likely be held free and fair manner. Observing all the preparations for and management of Sunday's election to the House of Representatives and Provincial Assembly, we can ensure that the elections will likely to held free, fair and impartially.

What are your own experiences managing observer groups during the elections?

In the elections, 44 national and 2 international observer groups are observing the elections for the House of Representatives and Provincial Assembly. There will be over 7800 observers will be mobilized on elections day. Having experiences observing the elections, our observers include foreign chief justices, former chief election commissioners, media groups, women groups, Dalit and indigenous groups and other civil society. We released our pre-elections environment report in presence of national and district-level observers of GEOC, and representatives from NEOC, EOC, Insec, Sankalpa, Anagalo, Women NGO Federation, YFD and media. This wider and more inclusive representation is our strength to ensure observation is free and fair.

What is the basis for such assurances?

Compared to previous elections, Election Commission, Nepal Government, Security Agencies other stakeholders have strengthened their preparation to create a conducive environment to conduct the elections freely and fair. Learning from the past, the Election commission has made good progress in collecting voter lists, candidate registration, implementing codes of conduct, security arrangement, ballot paper, ballot boxes, voting booths, management of employees and others.

How many districts GEOC’s observers are covering?

What GEOC observation in the election campaign period?

There were no agitations and disturbances the elections this time would be conducted in a peaceful manner. This time the campaigning for the elections was also not too expensive and flamboyant. Parties in candidates are disciplined during the election campaigning indicating that democracy is moving in the direction of consolidation.

How did candidates respond to the Code of Conduct?

All the candidates followed the code of conduct and conducted the house-to-house campaign in a peaceful manner. However, national leaders had tried to instigate voters during their election campaign. National leaders even tried to influence the voter announcing to offer unnecessary assurance, Due to their statements, their assurances have created a negative environment,

How were the relations among the workers of political parties during the campaign period?

What is the state of the Code of Conduct? Are political parties abiding by it?

Due to the vigilance of the Election Commission and observer group, candidates and political parties have largely abided by the code of conduct. However, a few party leaders had also made effort to organize a big rally during the candidate registration. During the elections campaign, political parties and candidates have used very nominal banners and wall and hand pamphlets compared to previous elections. However, parties widely used loudspeakers creating a nuisance in rural areas. Our observers reported that voters opposed these activities. Thanks to the Code of Conduct issued by the Election Commission, parties did not use general party flags and symbols in a public places.

How do you see the role of the Elections Commission?

Election Commission is quite effective to ensure free and fair elections. The commission has played a very effective role in taking the necessary steps to ensure free elections, The preparation and management of the election till now have ensured that the election will be completed peacefully. Compared to the past experience there have been improvements in the voter list, candidacy registration, implementation of code of conduct, security arrangement, ballot paper, polling station, voter education, staff management, etc.

What GEOC’s observer looks at the state?

In a report prepared based on the observation of the pre-election period, the preparations and environment for the election are much more stringent than in the past, providing a level of confidence for a clean and peaceful election.

How many observers will GEOC mobilize on elections day?

The GEOC has been conducting observations of elections through 331 representatives in 261 municipalities of 36 districts of the country on party registration, candidate nomination, and election campaigning, among others. We will mobilize 10 special observers, 24 national observers, 36 district observers and 261 local observers on election day.

How do you find inclusion in the candidate’s selections? What is the state of women candidates in First-the-Past-Post?

Political parties did not abide by the spirit of the Constitution and Laws in selecting women candidates. Despite the mandatory provisions of 33 percent, only 9 percent of women are contesting under FTPP for the House of Representatives. Elections Commission needs to be more assertive to implement the provision of 33 percent. GEO C will recommend in its final report to press political parties to nominate more candidates under FTPP.

How do you say that your observers are independent and non-partisan?

We have our own code of conduct and the code of conduct of the Election Commission. If we receive any kind of complaints questing the neutrality of our observer, we take action immediately disqualifying him/ her in any observation for life.

How are your own personal experiences of conducting the elections for such a long time and managing all activities?

It is really a tough one. The process of observation starts from the publication of the voter list and ends after the results of the elections and presenting our report to Election Commission. This involves a lot of processes. However, GEOC has good networking and high credibility due to the involvement of high-level dignitaries including former chief justices, former chief election commissioners, human rights activists, women's rights, Dalit rights and other activists. GEO C is a credible and inclusive elections observer body having specialized in elections observers.

What Did Nepal Learn From Ghana? The Perspective By A Correspondent 1 month ago