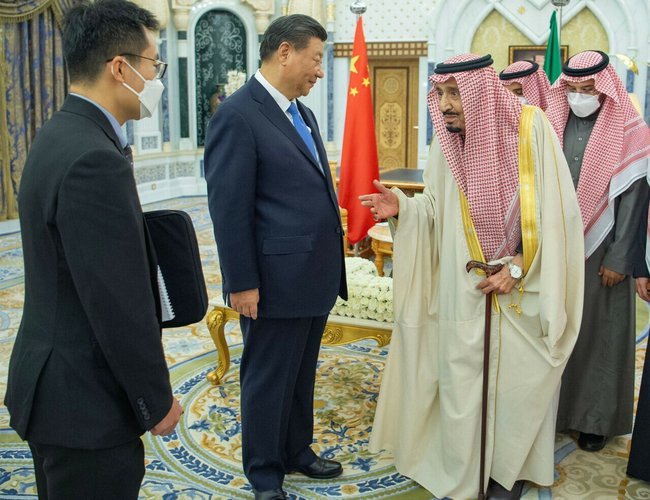 Chinese President Xi Jinping is exploring new territory during what he has called a "pioneering" trip to Saudi Arabia. He has signed dozens of deals to "usher in a new era" in relations with the Arab world.

Xi was welcomed on Thursday to the royal palace in Riyadh by Crown Prince Mohammed bin Salman.

China has become Saudi Arabia's largest trading partner, while the kingdom is one of China's largest suppliers of oil.

Xi said that under King Salman and the Crown Prince's leadership, the people of Saudi Arabia will keep striving to "blaze a path of modernization" suited to their national conditions and to realize even greater achievements.

Chinese companies are already invested in megaprojects across Saudi Arabia, including railways, hydrogen plants and the infrastructure for fifth-generation cellular networks. Xi wants to export even more technology.

The Saudis have spent decades fostering security and economic ties with the US. However, President Joe Biden has accused them of siding with Russian leaders to cut oil production. He has said he is "rethinking" the relationship.

Ukrainian Soldiers Arrive In Britain For Tank Training By Agencies 17 hours, 24 minutes ago

Western Allies Free Up Leopard 2 Tanks For Use In Ukraine By Agencies 4 days, 17 hours ago