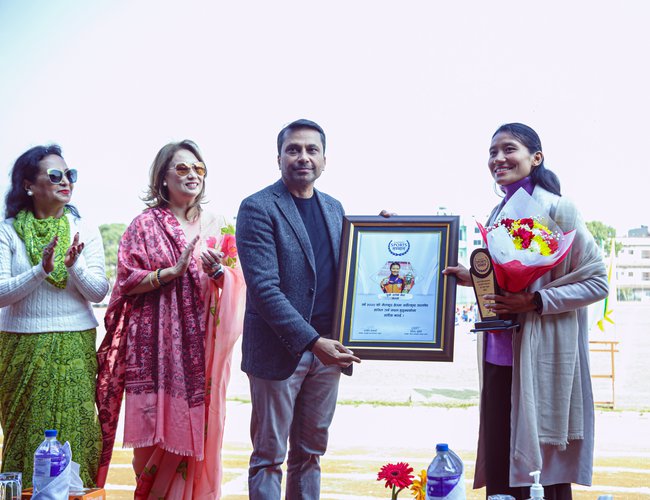 Sanskriti International School has announced to establish an Annual Award in the name of the “Sanskriti Sports Samman” annual sports award to encourage rising talents in the national sports arena. This award will be conferred annually in accordance with the English calendar (A.D.) to one sportsperson who has performed best in the sports sector and excelled in his/her field in 2022.

Accordingly, the announcement of “Sanskriti Sports Samman” was made by the Chairperson of the school, Ranjit Acharya in presence of other board directors, the president of NSJF, and celebrity sports star Paras Khadka at the Armed Police Force ground, Halchowk during school’s Annual Sports Day.

The award for this year is presented to Miss Santoshi Shrestha, the First International Gold Medalist women athlete who has performed and excelled in her field in 2022. Santoshi Shrestha is a national athlete and a public health professional who has bagged multiple degrees in Public Administration and Public Health Nutrition.

The award was handed over to Santoshi Shrestha by Mr. Paras Khadka, The Chief Guest of the program as well as the former captain of the National Cricket Team, in the presence of Mr. Ranjit Acharya, Chairperson, Sanskriti International School along with Mr. Devendra Subedi, President of Nepal Sports Journalist Forum. Mr. Pashupati Murarka, Director of Sanskriti International School handed over a cheque of amount Rs. 1,01,000 to Miss Santoshi Shrestha.

Similarly, in the same program, the training scholarship worth Rs 50,000/- was also announced for deserving under 19 cricket players from across the country who cannot afford for professional training. This training will be provided by the Cricket Excellence Centre, run by cricket Paras Khadka. The training scholarship for this year has ben given to cricketer Krishna Bhatta from Dadeldhura-4.

Ranjit Acharya, Chairperson of Sanskriti International School said, “We, here at Sanskriti, believe in the overall growth of our students as well as the societies. With the establishment of this “Sanskriti Sports Samman” annual award, we are hoping to encourage our national talents and aspire our students to build an empathetic society. We wish Santoshi Shrestha all the very best in her journey and hope she achieves immense success. Our best wishes also go towards Mr. Krishna Bhatta for winning the training scholarship, we hope you will be selected in the National Cricket Team in the future.”

Paras Khadka said, “The training scholarship started by Sanskriti International School is really good encouragement for the upcoming cricketer of Nepal. The institute will find the right talent for the same.”

Santoshi Shrestha is the First International Gold medalist women athlete of Nepal in athletics. She is a national athlete and a public health professional who has bagged multiple degrees in Public Administration and Public Health Nutrition.

She has been awarded Special Award at NSJF Pulsar Sports Award 2076 by the National Sports Journalist Forum, Best Player of the year of Athletics 2076 by Nepal National and International Players Association, and National sports Talent Award by the Youth and Sports Ministry, Government of Nepal.

Regarding the same, we have attached the press release herewith. We humbly request you to publish the news along with the pictures attached.