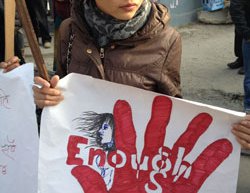 “We demand that the Prime Minister of Nepal should personally guarantee that his government will prevent the incidents of violence against women. In cases that do take place, we demand that he ensures justice. Only when he fully and effectively prosecutes the perpetrators of violence against women like Sita Rai, his government can be considered committed to ensuring the rule of law,” reads the demand from the initiators of the Occupy Baluwatar Movement.

Occupy Baluwatar Movement, a public movement to end violence against all forms and to end gender based discriminations, has been gaining pace and has seen a huge public participation. The movement has been supported from all quarters and has gone viral in the social media.

Violence against women has been increasing in Nepal, to the extent that, in some cases, government officials, who are there to protect the citizens, have been found involved as perpetrators.

People from all around the country have been participating in the 'Occupy Baluwatar' movement, directly or indirectly, which is supposed to continue till the fourteenth of January. People are coming together demanding justice for victims of violence against women.

The news of Sita Rai, a migrant worker, who was first robbed by immigration officials and then raped by a police officer, went viral in the social media just after it appeared on the news.

Sita Rai is not the sole victim of such violence in Nepal. Reports on sexual exploitation of minors have become public in the recent times adding to the public outrage.

The extent of cruelty and the severity of the cases have received vigorous public attention. The common people are now openly protesting against the futile governmental efforts in such cases.

According to Bandana Rana, a prominent Nepali rights activist, it was not very common for women to stand up against violence in the past, but now the time has demanded for them to stand up and they are standing up for their rights.

Rana, who has been a leading figure among the rights activists, demands strict government actions against the charged.

“Many victimized girls and women aged between 14 and 30 are participating in the movement. This movement has empowered them and made them aware of their rights,” said Rana to the media.

The movement coincides with similar protests in India that are held after the death of 23-year old student who died after being raped in Delhi.

“While education may over time promote gender equality and help change mindsets, in my view, legal literacy is the need of the hour,” said Priya Hingorani, senior Supreme Court lawyer of India to the BBC.

The same thing applies even in the case of Nepal. In Nepal, violence against women has been so frequent that it demands straight forward legal action from the government to prevent such cases from happening. The women should be made aware of their rights in the first place.

A cabinet meeting had decided to provide some NRs 150,000 in compensation to Sita Rai, which has been rejected outrightly.

Such simple move of the government against such severe cases has caused even more anger in the public. People even held boards which read “Rape for 150,000” while protesting around Baluwatar.

“Hang the rapist”, “Hand over the guilty to the public”, “Make rapists chemically impotent”, are among many Facebook status posts that are updated by the people demanding stringent actions against the accused.

The movement against all kinds of discriminatory and gender-based violence has definitely opened the eyes of many. Although the government has been repeatedly saying that they are taking the cases seriously but it has not been promptly taking actions.

If the government fails to take strong actions, the outrage is expected to go even wider.