President Dr.Ram Baran Yadav has very narrow choices given the failure of the political parties to nominate a consensus candidate 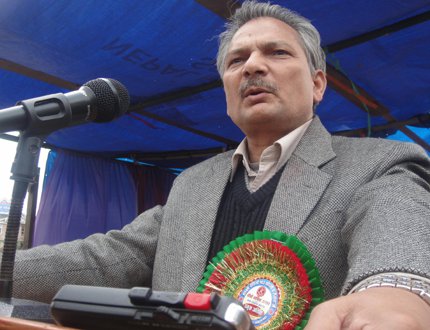 As the head of the state, Dr. Yadav cannot wait for a longer period without a government to hold the new elections. Neither can he take a step, which will be considered as going against the constitution.

However, in a few days or weeks, the President will have to step in to settle the current political crisis irrespective of the possible stiff opposition from UCPN-Maoist and SLMM.

"We requested the President to dismiss the present government and form a new national consensus government. There is no alternative before him other than to dismiss it," said Upendra Yadav, leader of Madheshi Janaadhikar Forum.

The President’s choice is narrowing. At a time when leaders of Nepali Congress and CPN-UML have outrightly rejected the proposal for a neutral prime minister, the President's options have further narrowed.

"The resignation by the present government is the first step for political consensus," said CPN-UML leader Jhalnath Khanal. "UCPN-Maoist has been dilly-dallying by proposing various options. If the prime minister does not tender his resignation, we will launch a nationwide agitation," said Khanal.

Although President Dr. Yadav is now consulting with the politicians, constitutional lawyers and the people from various walks of life, it seems that he will wait for another few weeks before taking a decisive step. By saying the present government led by Bhattarai cannot be a national consensus government without tendering resignation and new appointment, president Dr. Yadav has already hinted that the days of Bhattarai are close to end.

Whether the President acts or not, Nepal’s prolonged political instability is likely to intensify in the coming days. After the outright rejection by opposition parties to recommend the name of neutral person to lead the election government, the prime minister and ruling alliance have already made it clear that they will go for the revival of dissolved Constituent Assembly in case of failure to find a consensus candidate to hold the elections in April 2013. Nepali Congress and CPN-UML’s decision to launch nationwide agitation to press ruling alliance and Prime Minister Bhattarai is receiving the support from even the CPN-Maoist, the breakaway faction of UCPN-Maoist. All this is pointer that political chaos is looming large.

POLITICS Uncertain Future By A Correspondent 2 days, 8 hours ago