Approximately 10,000 to 15,000 people in the Katmandu Valley work in the solid waste management sector. 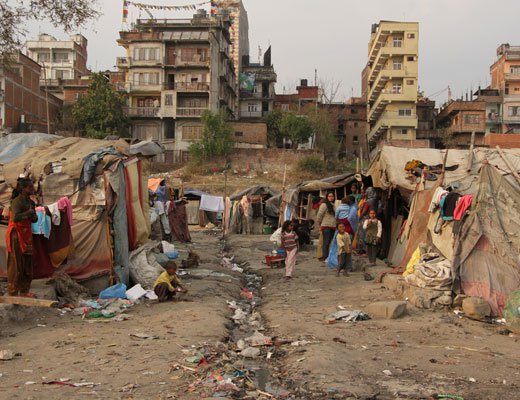 Informal waste workers (IWWs) belong to the poorest of Nepali society and are highly vulnerable to health problems because of their daily contact with hazardous substances. On top of that, they are stigmatized by everyone, despite their vital contribution to the environment.  PRISM is a joint project between the European Union and the UK-based INGO Practical Action. Through workshops and campaigns PRISM tries to improve the IWWs’ perilous living conditions and attempts to raise awareness to both society and these waste workers. In one year the project is coming to an end, but did it pay off?

In the waste collection center in Balkumari, Lalitpur, a group of young men is taking a break after collecting and segregating garbage all morning. The group in Balkumari consists of 25 men in their 20s. The artificial division into groups is set up by PRISM to address the 5,270 IWWs they have identified more easily.

Lalitpur Sub Metropolitan City is one of the five municipalities where PRISM has its project running. Nabin Bikash Maharjan of the Centre for Integrated Urban Development (CIUD), implementing partner for this project, explains the necessity of the initiative, which is funded eighty per cent by the European Union. “Many things are going wrong in the solid waste management sector,” he states. “The municipalities have been spending a huge budget on this already, but there is no proper management. As a consequence, IWWs remain in the informal sector,” Maharjan says.

Informal waste workers usually live in temporary huts near the riverbank of the Bagmati or in the slum areas in the Valley. Their typical day starts at 4 or 5 o’clock in the morning.They pick up waste, segregate it and sell what is valuable, such as the plastic bottles. According to Maharjan, they just make enough for their day-to-day life due to a lack of bargaining skills. He emphasizes the importance of IWWs entering groups. “These people make an average wage of 200 rupees per day. They sell what they collect to a scrap owner, who will give them just enough money for the day. Most of them are unable to save. What they get for the day, they need to spend on food. If they are out of money, they will borrow from a friend. So the debt is there already.”

By way of accessing a group, PRISM teaches an IWW about programs and activities such as microfinance. Further, one of the main goals of the project is to increase the IWWs income with 30 per cent. But how will that be sustainable in the long term? “For example”, says Maharjan, “one group of 35 IWWs has set up a business plan for a plastic tearing machine. They used to sell the plastic for 6 rupees per kilo. But when it is properly torn and dried, they can earn 24 rupees. That is how we increase their income, by improving their products.”

With objectives such as these, PRISM directly helps at least 4,000 informal waste workers in the Kathmandu Valley. A striking finding appeared during a baseline survey is that almost half of the IWWs are of Indian origin. Maharjan explains why, “There is an open border between India and Nepal and Indians comes to Nepal and are likely to end up in this work.”

Sarala Shrestha, Community Development Officer for PRISM, thinks the massive migration can be explained in terms of social stigma. “Indian waste workers often come to Nepal because they are willing to do this work. But they have to put up with an environment that treats them condescendingly. Here, no one knows them.”

As a social worker, Shrestha has been present in the field from the moment the PRISM was started. At the waste collection center in Balkumari, she sits together with the group of young men and discusses what each of them was able to save lately. It looks like the group functions as an informal, small bank. They even have a treasurer. “That is what they have to learn,” she smiles, “how to trust their colleagues. Some are afraid that the treasurer will walk away with their money.”

This particular group is led by Rangid Das, the ‘president’. Like many waste workers, he got enrolled in this work because of his parents. As if he was meant to do this. Das lives in a rented room nearby, in Teku. He used to make 700 rupees a day, but due to illness, he now only earns half that money. Still, he feels happier than ever since he got involved with PRISM. “I am saving within my group,” he says. “I save for my future, so I don’t have to ask others for money all the time.”

With these men, the awareness campaigns concerning health and safety definitely have paid off. “If we don’t wear our safety equipment, we can cut ourselves on metal or glass,” Das says. Although these youngsters enjoy their work, it is their dream to start a brick business. “They already have the land to start their enterprise,” says Shrestha.“But for their own insurance, they need a lease agreement with the land owner. The focal person of the Lalitpur municipality is helping them with that, so that already is a huge improvement,” she thinks.

That is a huge improvement indeed. There was a time, not so long ago, when even the local and state authorities despised IWWs. But these informal waste workers actually help municipalities because they make sure 1,500 tons of garbage leaves the Kathmandu Valley per week. Through social campaigns such as public service announcements, PRISM succeeded in bringing about a change in the society’s perception and pulling of respect for IWWs. And yes, municipalities also are part of that society. Rabin Man Shrestha, Chief of Environment Management Division of the Kathmandu Metropolitan City Office, encourages the PRISM project since there was no government initiative. “It’s positive, we finally have data on number and origin of IWWs. Now we can talk to the municipality about making a policy and make these people go from informal to formal work sector. They are high on the agenda, because they are helping us. Before, there just wasn’t enough budget,” he states. Rabin Shrestha counters Maharjan’s criticism that there indeed was enough money, but that is was not properly spent. “The budget was mainly used to pay our staff salaries,” he admits.

Next year, the PRISM project will end. Nearly all stakeholders agree that three years won’t not suffice.“At least ten years are needed for a project like this,” Sarala Shrestha says.Project Manager for Practical Action Nepal, Srijana Devkota Adhikari agrees. “There is enough money but too little time. We have already worked non-stop on this for twenty months. It took us over a year only to identify 4,000 IWWs. Slowly but surely, we are seeing the results. We piloted this project but the municipalities need to make it sustainable,” she says.

Practical Action provided 20 per cent of the PRISM funds. About 1.25 million euro was given to the project by the European Union. Each year, the EU invests in Nepal some 40 million euro. On a question about the PRISM project, the Delegation of the EU to Nepal wished not to comment.