Eyes On the Journalist: A Risky Profession

Nepal is becoming more and more unsafe for journalists to work freely. The country saw a slide from 106th place to 118th in the World Press Freedom Index 2013 of the Reporters Without Borders (RWB). According to the French-based NGO, the decline can 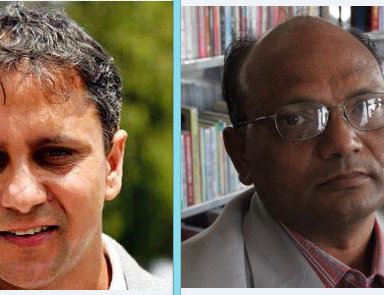 “The main reason why the situation in Nepal has become worse for journalists is because of the so-called political commitment,” explains Narayan Ghimire, Media Monitoring Officer for Freedom Forum. “In theory political leaders are committed to press freedom and the right to information. But they do not translate their words into action. There has been a negative evolution, especially in the recent years with the ruling (until very recently, editor’s note) UCPN-Maoist party,” Ghimire says. He thinks both the UCPN-Maoist and its breakaway CPN-Maoist are hostile towards press freedom. Going further, he says: “The Maoists still attack journalists and issue death threats towards them.”

Shiva Gaunle, President of the Federation of Nepali Journalists (FNJ), understands where the frustration is coming from. “In Nepal, there are two kinds of problems journalists are facing. Firstly, there is this aspect of physical safety, which is terrible. Second is the professional safety. If a journalist constantly has to weigh in on what kind of news he can or cannot write, he is condemned to self-censorship.”

Gaunle has little faith in the commitment to press freedom reiterated by Prime Minister and UCPN-Maoist Vice Chairman Baburam Bhattarai, until before his government was replaced. “Bhattarai says a lot, but he is not serious. The Maoists claim they have become more liberal towards the press, but we have our doubts.”

In the wake of Dekendra Thapa

Editor of Sanghu Weekly Gopal Budhathoki is one of those journalists who received death threats on his Facebook and cell phone after writing a news report on corruption in Kathmandu. “After publishing the story, I received anonymous phone calls coming from Hong Kong and Germany.  One number called me 156 times!” he exclaims angrily. “Day and night I received calls like that. They threatened to burn me or bury me alive, just like Dekendra Thapa.”

The killing of Dekendra Thapa probably is the most notorious murder case of a Nepali journalist over the past years. During the 10-year Maoist insurgency, which lasted until 2006, Thapa was abducted from his house in 2004 and buried alive, allegedly by Maoist rebels. Last year, eight years after his death, five Maoist cadres were brought to court due to their involvement in his murder.

Budhathoki walks up to a metal closet, takes out a dusty map full of old magazines and points at a horrible picture. The photo shows a man blindfolded and with his hands tied to a tree. He is decapitated and there is blood everywhere. “This is how the Maoist rebels dealt with the press,” Budhathoki shouts. “The same goes for Dekendra Thapa. He was a famous journalist and social worker. But the Maoists hated his reports about their killing of people. That is why they murdered him,” Budhathoki shares his disgust.

“Not true,” says Dipak Sapkota, Central Committee Member of Revolutionary Journalists Association and a UCPN-Maoist sympathizer. “The reason Thapa was killed by Maoist cadres is because he was a spy for the state army, not because of his critical writings. His death was not work-related. If Thapa weren’t a spy, he would still be alive,” Sapkota tries to defend the party. He emphasizes the tendency to mix up press violations with personal cases and refers to the murder of Yadav Poudel, a journalist who was killed last year. Poudel was covering stories concerning prostitution in several hotels in Jhapa district. He was later found dead near one of those hotels. “NGO’s like to present his death as being press-related. But we cannot forget he had an extramarital affair with the wife of one of the hotel owners. Maybe that is why he was thrown of the hotel roof. Journalists also have a personal life, you know”.

Spy or no spy, extramarital affair or not, the truth is that it usually takes a while before authorities actually undertake action against violators of press freedom. Nepal ranks 7th in the Impunity Index 2012, published by the Committee to Protect Journalists (CPJ). “Impunity is growing,” both Shiva Gaunle and Narayan Ghimire speak with one voice. “It has become so easy to attack journalists. If a violator has good relations with any political party, not only the Maoists, but also the police do nothing. I can say there is almost a lawless situation going on in Nepal. A jungle raj,” Gaunle complains.

Narayan Ghimire agrees. “Obviously there is protection from the upper hand,” he declares, agitated. “Why do you think it took eight years before Thapa’s murderers were brought to court? Prime Minister Bhattarai made several efforts to protect his political cadres and keep them out of jail. That is how impunity grows,” Ghimire says.

Journalist Deepak Sapkota though, thinks the Impunity Index is overrated. “I think the NGO that published the index is overreacting. It is true that, in the past, all parties were guilty of threatening journalists because of their writings. But the situation is improving. All parties have developed some kind of media friendliness,” he says.

Of course, not only political parties, and more specific the Maoists, can be blamed for everything. “Indeed,” says Ghimire. “Everyone can be an attacker. Underground armed groups, the police or the army, industrialists or traders and in some cases even the general public. Everyone has their eyes on the journalist.”

But if a journalist becomes everyone’s target, how can he ever deliver quality news and inform the public properly? “Well, self-censorship is growing,” he adds. “Of course this hampers professionalism.”

Central Committee Member of UCPN-Maoist Jokh Bahadur Mahara calls it the “misuse of the press” and says that self-censorship is not caused by the government, nor by industrials, but by media houses themselves. “A professional journalist is free and feels no tension coming from political parties. Political leaders respect journalists because it is through them their policy reaches the masses. In reality investors and media owners censor their journalists. They are in favor of someone else and have the last word of what can be written and what not,” he says, convinced.

Not only self-censorship explains the decline of quality news in Nepal, Maoist sympathizer Sapkota thinks. “A lot of journalists are affiliated with political parties,” he states. “Journalists who actually are political activists play a devil’s role.”

Sanghu Weekly-editor Gopal Budhathoki knows better than anyone what it is like to be censored. “I have been in prison already 33 times due to my news reports,” he shouts while banging the table with his fist, “and even though I am still scared, it will not stop me from writing!”

FNJ President Shiva Gaunle also does not consider giving up. “We have a strong network nationwide. If we don’t get help from the national level, we immediately request international help.”

FNJ is very much looking forward to the new constitution. “We will put pressure for more press freedom and freedom of expression, so yes, we have confidence,” he says, not fully convinced.

DEFENSE MINISTER IN KALAPANI Conciliation or Provocation? By A Correspondent 3 days, 11 hours ago