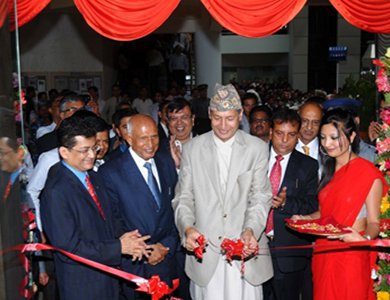 Governor of Nepal Rastra Bank Dr. Yuba Raj Khatiwada inaugurated NIC ASIA Bank's new corporate office at Trade Tower amid a function. After the completion of the merger of NIC Bank and Bank of Asian Nepal (BOAN), NIC ASIA Bank commenced its operation on June 30 June 2013. With the merger, NIC-Asia Bank turns into one of the largest commercial Bank of Nepal.

Inaugurating the corporate office, Nepal Rastra Bank's governor Dr. Khatiwada stressed the need to maintain quality service. "The bank has more responsibility now as this is the first bank commences operation after merger.

According to a press release issued by the Bank, this merger was initiated with the signing of a Memorandum of Understanding on 28th June 2012 followed by an In-principle approval given by NRB on 23rd July and a Merger Agreement on 31st Jan 2013; with the final approval given by NRB on 26th April 2013.This merger has created history in the Nepalese banking sector as the first merger of two “A” class commercial banks. With this merger, NIC ASIA Bank is now amongst the largest private sector commercial banks in the country in terms of capital base, balance-sheet size, branch/ATM network, customer base and employees.

Speaking at the function, Jagdish Prasad Agrawal, chairman of the bank, expressed his commitment that that bank will provide efficient and professional service.  Chief Executive officer Sashin Joshi thanked the entire person helping to make the merger process success in time." I am very happy to say that Nepal Rastra Bank has supported us from very beginning to till now making the merger process success. We still need NRB's support in coming days also."

Before the merger NIC Bank had 36 branches and BOAN 29 branches. With the consolidation of 13 branches and addition of a Corporate Branch, NIC Asia Bank now have 53 branches and 57 ATMs which will be expanded to a total of 66 branches within 1 year with the re-location of the 13 branches. The Bank has a customer base of 270,000 and a strong capital base of close to NPR 5 billion including retained earnings for the current year.

The Bank's consolidated Operating Profit for the first 11 months of the current year to mid-June 2013 is NPR 1.43 billion. On a consolidated basis, the Bank's deposit base now is NPR 38 billion with loans & advances of Rs 33 billion.

"The process of merger was very difficult. The merger was possible because of support given by all concerned stake holders," said Rajendra Aryal, member of Bank

The Management will continue to be headed by Sashin Joshi as Chief Executive Officer supported by senior executives of both banks.

Despite the merger and consolidation of a large number of branches there will be no staff retrenchment as the Bank believes that it has very qualified, trained and competent people who can add value and contribute to the Bank's growth plans after the merger. We believe that there will also be significant career advancement opportunities for our people in view of the expansion we are envisaging over the next few years. Currently, there are a total of 644 employees.