As he always does, Chairman of the Council of Ministers KHIL RAJ REGMI showed a quiet and calm demeanor throughout his hour-long meeting with a select group of journalists at his official residence in Baluwatar recently. Brushing aside all controvers 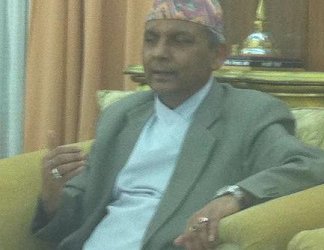 As the CPN-Maoist continues to issue threats, how possible it is to hold the elections on November 19?

The elections will be held in a peaceful, transparent and free and fair manner. Nobody needs to have any doubt about this. It will be more inclusive and participatory than all the previous elections. Don’t be skeptical about the elections. I want to assure you all that there will be elections on November 19 because there is no other way but elections to bring the constitution making process back on the right the track.

Why is the government stressing so much on elections?

The election is the only way out to find an amicable political solution. The people’s court is supreme in a democracy. The election is the only way to guarantee an accountable government. Thus, there will be this election on November 19. Every Nepali is waiting for it. I firmly believe that all Nepali will come out to support the government in holding free and fair elections. At a time when an overwhelming majority of the people and political parties are in favor of the election, nobody can disrupt the November 19 polls. I am speaking this from my heart. Let people decide about their future.  My aim is to create a congenial environment for broader participation.

Why are Maoists left out?

I don’t want to resort to a blame game. The government and political parties held several rounds of formal and information talks with the Maoists and waited till the last minute for their positive response. Unfortunately, they decided not to participate in the elections.

As the chairman of the interim council of minister, what is your personal assessment?

My one and only mission is to hold the peaceful Constituent Assembly elections on November 19 and install an elected and accountable government. I am confident that the new Constituent Assembly will also formulate the new constitution in the stipulated time. I am a judge and I will give justice to the people through the coming elections. Since the first Constituent Assembly is reported to have completed over 90 percent of work, the new CA will complete the task of writing the constitution. My only duty now is to hold the elections. Given the present preparation and support given by the people and political parties, I have no doubt in my mind about the November 19 elections.  In my 32 years’ career in judiciary, I always maintained impartiality and neutrality. This is the testimony I can show to assure the election held under the present interim government will be fair and free. Even the international community accepts this fact and reality.

How do you estimate the strength of forces who are opposing the elections?

Holding the elections is a big agenda and there is no other greater agenda than this. Since there are a handful of persons and parties against the elections, they will be swept away by the flood of people.  Since the government has made a good security preparation, security agencies are capable to defuse any kind of disruptive activities. We have seen, during the period of filing the nominations, that nobody can stop the people from realizing their wishes. Those who are boycotting the elections do not have an alternative to justify their agenda among the people.

How do you see the election arrangements?

Despite all difficulties and lack of communication, Nepal held the referendum in 1980 and I was an Election Officer then. Despite all the difficulties, we were able to hold it on a single day. Now the situation has changed a lot. We have better communication systems and other facilities including the roads.

How about the security arrangements?

As there are good security arrangements to ensure safety and security to the voters, I am expecting high turnouts on the election day on November 19. The voter turnout will be even higher than that of the last CA elections since the law and order situation is far better now than the last time. The government is prepared to deal with any possibility of disturbance, including the proposed ten-day general strike.

There are reports that the government is mobilizing the Nepal Army for elections. Is it like the past or different?

The government is mobilizing the army as per the Interim Constitution.  Nepal Army has been a part of security arrangements in the past elections. There are certain confusions because of the word used in the constitution. Nepal Army will be mobilized under an Integrated Security Plan under the order of civilian authority or the chief district officer. I am very much satisfied with the security arrangements prepared for the Constituent Assembly elections. All the security forces including Nepal Army are ready to handle any kind of situation.

What is the state of law and order in Terai?

To maintain the law and order in the Terai region, Nepali security agencies have been working very closely with their counterparts in India. We are concerned about the security situation. Nepal Police is coordinating with Indian Police to manage the border during the elections. Like in the past, Nepal will coordinate with Indian police to maintain the law and order and check criminal elements from crossing the border. Nepal Police has maintained good coordination with Indian security officials from high level to district level.  The government has been taking stock of the security situation and analyzing it on a day to day basis. Compared to 2008 CA elections, the number of violent incidents are very few.

There are reports of rampant use of Indian numbered vehicles. How do you look at this?

What do you do following the holding of the November CA election? Will you return to the Supreme Court as Chief Justice?

My whole concentration is now on November 19 CA elections. I have not thought about anything beyond November 19. I firmly believe in the conviction: conquer unfriendly situation through friendly behavior and overcome negative thinking with positive look. Thus, I am optimistic about the CA elections on November 19. That is my only one aim now.