Despite the immense contribution Elizabeth Hawley made by spending her life entire life in the promotion and development of Nepal's mountaineering, the nation has yet to recognize her 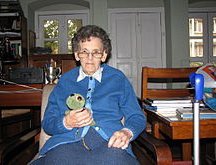 Elizabeth Hawley remains firm in her mission to develop the database of the Himalayan Expeditions. As a journalist, Hawley has spent almost fifty years of her active career in Nepal, collecting and compiling the database of the Himalayas. She has published a number of books. Her recent book The Himalayas by the Numbers: A Statistical Analysis of Mountaineering in the Nepal Himalaya, written with Richard Salisbury, is one of them.

The book highlights the most dangerous peaks and the safest and the best time of the year to climb. Answering these and many other questions in this comprehensive statistical analysis of climbing activity, ascents and fatalities in the Nepal Himalayas, the book covers three periods of mountaineering: of climbing expeditionary period 1950-1969, the traditional period 1970-1989 and the recent 1990-2009.

“The data are analyzed in several categories including climbing season, expedition year changes over time, geographical regions of Nepal, age groups, gender, citizenship and composition. In addition, facilities are analyzed for both members and hired personnel by causes of death with special emphasis given to avalanches, falls and psychological factors,” write the authors.

Published by Vajra Publications, the book also covers the time of day and the distance from the summit. It also examines climbing accidents. The book gives special emphasis on the most popular commercial peaks, Ama Dablam, Cho Oyu and Everest.

In the process of Nepalese nation building, many foreigners played prominent roles. Some left after completion of their mission and some decided to live in Nepal with growing attachment with the Himalayan nation. Among some foreigners who have been living in Nepal, managing time to make further contributions, Elizabeth Hawley is one. Internationally known for her record keeping on mountaineering in Nepal, Hawley has published several important books on mountaineering to her credit.

Quiet and committed, Hawley is making Nepal’s history on mountaineering without seeking anything in return. However, it is sad for the citizens of Nepal to see that the state is so unknown that it has paid neither any respect, nor any recognition for her great contribution. As a member of the international community, the Nepali state would do well to recognize her work.

As Sherpas are known for climbing skills, Hawley, who was born in the United States, spent almost her entire life, dedicating to the cause of mountaineering, and is equally known for keeping the records for almost all mountaineering events in Nepal since 1963. Hawley used to be the eye and ear for the international community till a few years ago, as she dispatched thousands of news stories, regarding Nepal's political, climactic or other events and processes.

As a Reuter correspondent, she wrote thousands of pieces of news on mountaineering and Himalayas. “She is an archive of the Nepalese Himalayas,” said an analyst.  She does not demand anything for her contribution.

Late Ludwig F. Stiller, S.J died as a Nepali making great contributions to reveal the historical period during and after the unification of Nepal. Barbara Adams has recently acquired Nepali citizenship following a long struggle.  However, J.P. Cross, who has made great contribution to the Nepalese history and Nepalese literature, is waiting to acquire Nepali citizenship. After almost five decades, Nepali state recognized Edmund Hillary and Tony Hagen, awarding them the status of honorary citizens. Although they served this nation more than the sons of soil do, the Nepali state seems to have always made a pathetic response to the foreigners.

Publishing her recent book, Hawley has shown her commitment and dedication to Nepal. She does not care whether Nepal is taking any move or not.

Today's modern nations admire and recognize any person who contributes for the cause of the country. As a member of the global community, Nepal has also opened its hearts, but it is still to admire those persons, who spent their entire career to uplift the national image of Nepal.

Book Nepal And The Great First World War By A Correspondent 2 days, 6 hours ago

COVID-19: Protecting Workers In The Workplace By Patrick Belser 9 months, 3 weeks ago