As Nepal-India security relations warm up, the law and order situation in Nepal has improved, particularly in the southern plains 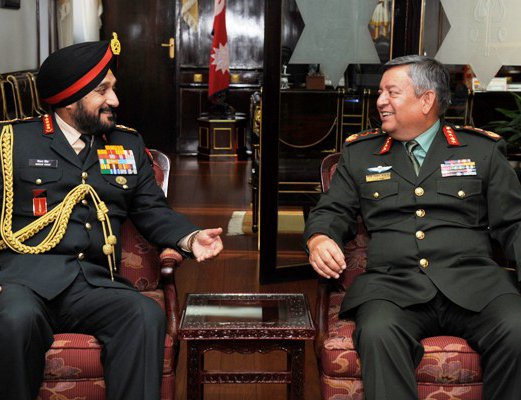 Nepal Police reportedly arrested a most wanted Mujahedeen leader, who was hiding in Nepal’s southern border close to India, and handed him over to Indian Police in Samastipur of Bihar. With a tip-off from the Indian intelligence, Nepal Police handed over the most wanted Indian Mujahedeen involved in a series of explosions in India following his arrest in Pokhara a few months ago.

Indian Police reciprocated with Nepal Police by handing over a dreaded Nepali criminal involved in a series of arson and killing of innocent Nepali. Although some dreaded criminals involved in various crimes in Nepal are still roaming safely in bordering cities of India, the recent growing understanding between Nepal’s two security institutions has shown that the days of free movements of criminals are numbered.

With the security relations warming up, the frequency of high level visits of the higher security officials of two countries has intensified. This has resulted in the improvement of law and order situation in the country, including Nepal’s southern plains.

The engagement of the security agencies is not just at one level. The relations have warmed at all levels. The visit of Nepal’s security chief has indicated it. For instance,  Chief of Nepal Army General Gaurav Sumsher Rana paid official visits to India twice last year. Chief of Indian Army reciprocated by visiting Nepal twice.

The importance given to Nepal’s security institutions has showed India’s priority now is to maintain good working relations with Nepal’s security agencies. At a time when there is a growing possibility of Indian Maoist and Indian Mujahedeen sneaking in Nepal, Indian security agency’s concern is understandable.

As the law and order situation in both the countries suffers due to growing criminal connection and lapses of security, the recent approach has already brought results. As in India, security agencies in Nepal have also realized the importance of maintaining good relations with India’s security agencies.

Although there are various levels of security management committees between the two countries, they have failed to change the situation. Nepal’s foreign ministry website accepts that fact that  security related issues are the prime concerns of both the countries. Thus, both the countries have various mechanisms to deal jointly with each other's security concerns. The two countries have established Meeting of the Home Secretaries, Nepal-India Bilateral Consultative Group on Security Issues (NIBCGSI), Joint Working Group on Border Management (JWG) and Border District Coordination Committee (BDCC).

Yet, nothing substantial had changed for years. Indian security officials blamed Nepal’s security agencies and Nepal’s policies for growing criminal activities, including fake Indian currency racket, drug and terrorism in India. Nepal also had similar kind of complaints against India.

Recently, the situation has changed. “I am very happy to inform you that both our countries see our security as interlinked. So India and Nepal are coming together to ensure that nothing happens which causes insecurity in the other country. Second, we have very good cooperation between our security forces, whether it is the police or the military,” Indian ambassador to Nepal Ranjit Rae said in his recent interview. ”We have very good cooperation between the Indian and Nepali security forces. I think the legal frameworks could be improved.”

Nepal’s security chief was also satisfied with the present scenario. “The security situation has improved a lot as security agencies of both the countries are meeting frequently,” said Ganesh K.C. spokesperson of Nepal Police.

At a time when Nepal’s bureaucracy is politicized and unable to perform its role in a credible manner, Nepal’s security institutions had largely remained uninfluenced, showing they had the capacity to deliver the results.

“At a political level, we have to be very conscious of each other’s interests and requirements. At the execution level too, there is good cooperation now. What is good about this cooperation is that it is now taking place in smaller units at the operational level. Of course, it is important at the central level but to improve security, it is more important to have good cooperation at the level of the border districts. This is moving on very satisfactorily. We have regular border district coordination meetings where these issues are discussed,” said Ranjit Rae, Indian Ambassador to Nepal in his recent interview.

An important bilateral issue between Nepal and India is related to politics and security.  “As Nepal virtually lies in the southern lap of the Himalayas, and shares borders with two huge states of Asia, we cannot ignore their security concern,” said former prime minister Dr. Baburam Bhattarai.

Although Nepal and Indian police always maintained the working relations at the local level, the relations were further strengthened following the high level meetings.

As national elections is approaching in India, officials from Nepal and India have agreed to intensify vigilance along the 1,850km porous border between the two countries to keep criminal elements at bay in view of the parliamentary elections to be held in India April-May.

At a meeting organized recently by the district magistrate of Siddarthanagar in Uttar Pradesh state of India, the two sides also signed an eight-point agreement to enhance security along the border to ensure it was peaceful during the upcoming elections.

Besides heightening security along the border, the two sides have also agreed to come down with a heavy hand on smuggling across various entry points, and ensure thorough checking of vehicles, drug smuggling and human trafficking, among others, Nepali officials said.

“We have agreed to curb human trafficking, and activities of armed outfits active in bordering areas, among others. And we have also decided to share real-time information in this respect to enable immediate action,” said Rabindra Sharma, senior superintendent of police (SSP) of Nepal Police in Kapilvastu district.

With increasing high level visits of security officials, the understanding between the two countries on mutual security concerns has reached new heights. Given the unstable nature of Nepalese politics and possible new political scenario in India, any shift at the political level can make major differences.

“It takes us years to build the present understanding and build workable relations between the security agencies. There is the need to take cautious approach to maintain the relations, which are benefiting both the countries,” said a senior diplomat from Indian Embassy on condition of anonymity.

As Nepal is between two big powers India and China, how Nepal’s northern neighbor China expresses its response to the growing closeness between India and Nepal’s security agencies remains to be seen.  With over 200,000 Tibetan Refugees in India, China always looked at the open border between Nepal and India as a threat to its own security in Tibet. Nepalese security agencies’ close relations with Indian security establishment are a prerequisite to maintain law and order in Nepal.

Locusts Reached To 26 Districts In Nepal, Destroyed The Crops By NEW SPOTLIGHT ONLINE 3 days, 21 hours ago